The share of hypermarkets and supermarkets is predicted to reduce further, to just 48% of global FMCG spend by 2021, with e-commerce set to grow to 7.5% and discounters 6.5%. 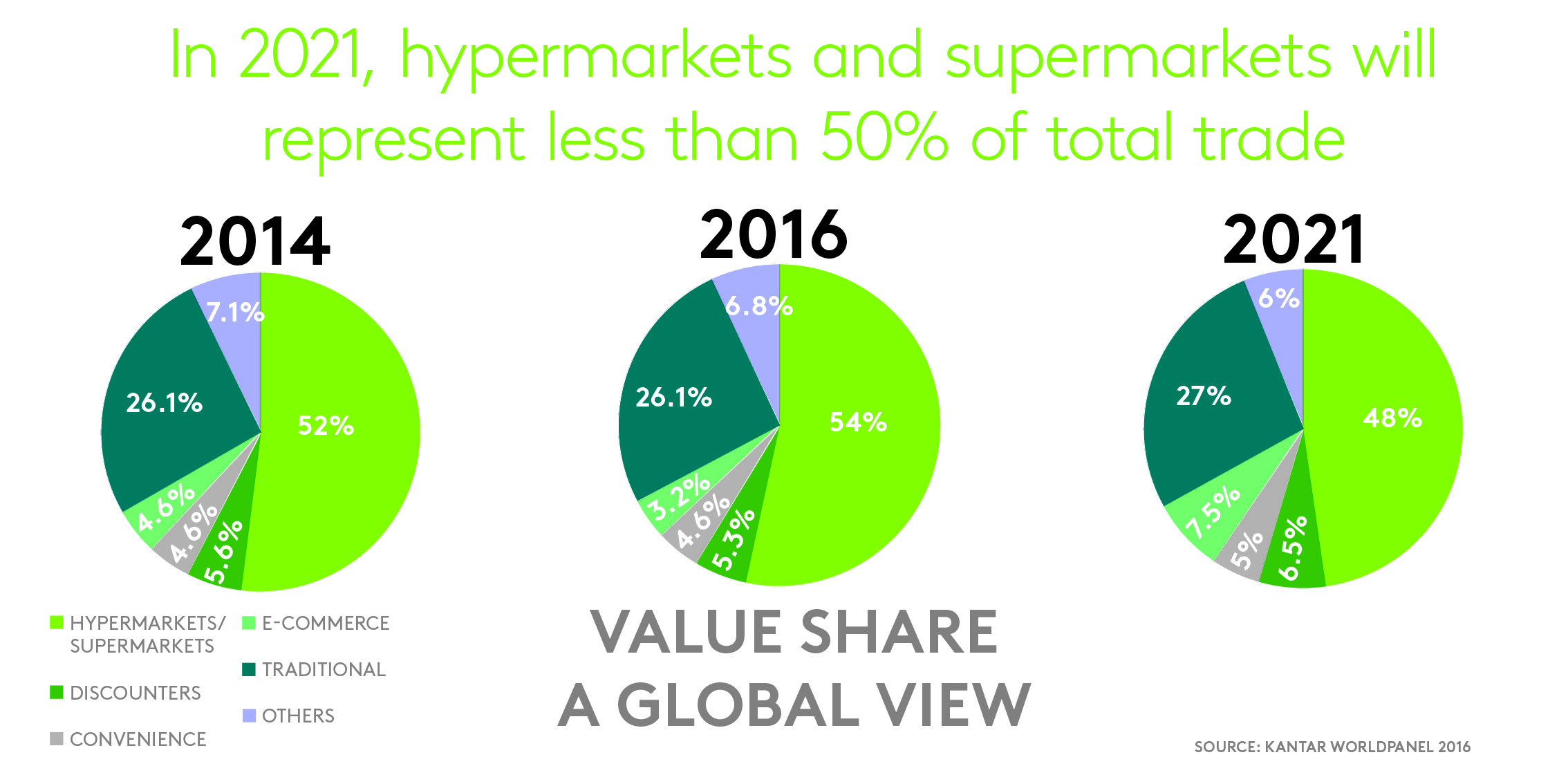 The share of grocery shopping conducted online continues to rise, particularly in the world’s most advanced e-commerce markets, such as South Korea, China and the UK. In the UK, online sales grew from 6.7% to 7.3% value share in the last year alone. British shoppers are second only to South Koreans in the proportion of groceries they buy online.

Discounters are the second-fastest growing channel in 2016 with 5.1% value growth. Discounters saw the highest value growth in Colombia –124% – where over 600 stores were opened in 2016.

This channel is still growing but at a sluggish pace of 0.7%. It has seen some success in some developing regions of Latin America however it is struggling against discounters in the UK and Spain, Peru, where traditional trade dominates, and in South Korea where e-commerce is fast becoming the dominant channel.

In developing regions where modern trade would be the next practical step, traditional and other formats (comprising door-to-door, cash and carry and pharmacies) are still performing well. In Africa, for example, where price and connectivity are key factors, traditional trade accounts for an average of 69.4% value share).

FMCG spend through this channel is growing faster than total FMCG in 50% of regions across the globe.

“Technology is fast changing the way people shop and, with e-commerce and discounters set to continue their march at the expense of large format retailers, there is an urgent need for retail reconfiguration across the world.”

COVID-19 Barometer shows consumers are in for the long haul

How are people feeling as the pandemic wages on? Do they feel safe? Will they travel? How do they feel about the future? As the...
Read more

COVID-19 takes its toll on households in Kenya

Our latest study in Kenya finds COVID-19 taking its toll on incomes and a reported increase in conflict in households. Key findings from the Kantar...
Read more

How to re-engage consumers to speed up post-pandemic recovery

Understand how six distinct consumer tribes can help marketers to reshape their messaging, consumer experiences and even their innovation plans to drive recovery. Chaos and...
Read more
- Advertisement -