Jury Still Out On Non-Oil Revenue As N2.63trn Flows Into Federation Account From Non-oil Revenue in 12 Months…

In the 12 months through to September 2017, gross flows into the federation account amounted to N3.51trn from oil revenue and N2.63trn from non-oil revenue. Over the period, oil revenue was the higher of the two in ten months, and non-oil revenue in just two.

The gap was smaller in 2016 (calendar year): oil at N2.70trn and non-oil at N2.24trn. It widened in the more recent period because the recovery in oil output pushed up oil revenues considerably in July, August, and September (see chart). Diplomacy in the Niger Delta has paid off for the FGN.

A similar conclusion should be drawn from the monthly payouts by the Federation Account Allocation Committee, of which the latest covers the distribution of revenues collected in November. The increase since mid-year is largely attributable to the improvement in average crude output, to 1.87 mbpd in Q2 2017 and 2.03 mbpd in Q3.

The CBN data captured in the chart are not to be confused with FGN revenue collection, which the Medium Term Expenditure Framework 2018-20 projects at N5.65trn for 2018.

The newsflow would suggest that non-oil revenues are lagging some way behind budget. However, we flag the interim data (for the FGN only) for H1 2017 from the office of the accountant general of the federation. These show oil, non-oil, and FGN independent receipts all well behind budget for the period but also substantial unexpected contributions from other sources to offset the disappointment (Good Morning Nigeria, 12 December 2017). These may, or may not be repeatable. 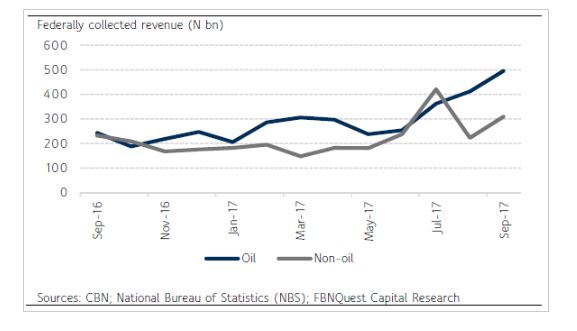 Our data is drawn from the CBN’s Quarterly Statistical Bulletin and incorporates some large revisions from the figures in its quarterly Economic Report series, notably for gross non-oil revenues.

Some different priorities in the Ghanaian response to Coronavirus

For a look at another response in the sub-region to COVID-19, we have read the statement following the meetings of the monetary policy committee...
Read more

President of Dangote Group, Aliko Dangote has said that despite the challenging economic situation in 2019, Dangote Cement was able to sustain 54,000 jobs in...
Read more

The Coronavirus pandemic (COVID-19) has not only affected governments, communities and families but has impacted global economies, bringing about unprecedented market uncertainties and fluctuations,...
Read more
- Advertisement -