Our chart today shows the FGN’s quarterly domestic debt service payments from Q3 2014 through to Q3 2017. The burden has increased in line with the stock of domestic debt, not forgetting naira interest rates over the period.

We cite the DMO data series rather than the draft implementation report for Q3 2017 from the Budget Office of the Federation, which has rather higher figures according to commentary yesterday in the local media. When the official data cover total debt service, we should remember that 90% was paid on domestic obligations.

From the 2018-2020 Medium Term Expenditure Framework and Fiscal Strategy Paper, we see total debt service excluding the sinking fund this year at N2.03trn, equivalent to 35.9% of total FGN revenue.

There is, however, some positive news to share. On the basis of total domestic debt service payments in 9M 2017 and the mid-2017 stock of domestic debt, we arrive at an average cost of borrowing of about 15.5%. From the auction results for FGN paper since end-August, which was the date of the framework paper, we can identify yield compression of about 350bps for the bonds.

Read Also:  A Little Breathing Space For The DMO...
- Advertisement -

The prevailing secondary market rates of between 13.00% and 13.50% point to a substantially lower burden this year than projected in the framework once we make allowances for the continuing programme of externalization (which itself generates savings due to the rate differentials). 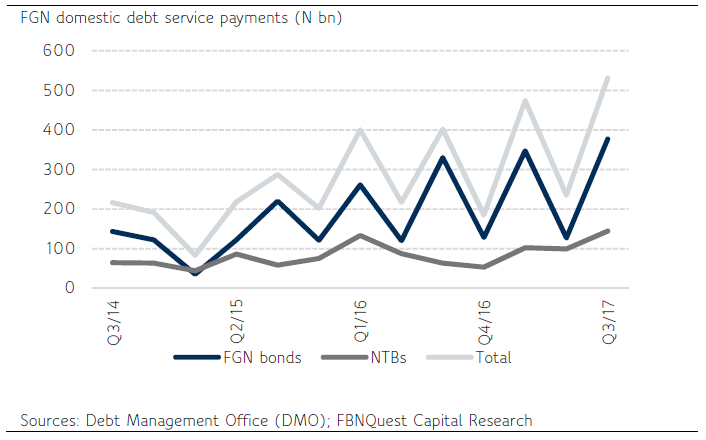 We conclude with an obligatory note of caution. The savings of, say, +/- N350bn could be lost in pre-election recurrent spending. Alternatively, they could be channeled into capital programmes for Nigeria’s ailing infrastructure. Given the plans for Eurobond issuance and repayment of maturing NTBs this quarter, clearly, we do not expect a retracement of naira rates.

5 foreign TV series that would increase your strategic thinking mindset

Watching movies serves as a form of entertainment and also a means by which people get educated more about human behaviour, strategy pop culture...
Read more
Health

May and Baker Launches Malact to Combat Malaria

Sequel to the Board Meeting of May & Baker Nigeria Plc held on Thursday, 26th November 2020 at the Muson Centre, Onikan, Lagos, the...
Read more
Business & Economy

As expected, the FGN Bonds market resumed trading on a bullish note as investors continued to lock up incoming funds in papers mostly at...
Read more

The Central Bank of Nigeria on the authority of The Debt Management Office (DMO) on behalf of the Federal Government Of Nigeria Offers for...
Read more