The sort code is a number that usually identifies both the bank and the branch where an account is held. The sort...
Read more
- Advertisement -
The latest data released by the NCC, the industry regulator, show that internet subscriptions stood at 94.8 million in November, representing y/y growth of 2.6%. The figure implies the density of 51% in a population estimated at 185 million, placing Nigeria well above the African average of around 16% as estimated by McKinsey.
In November there were 931,000 new internet subscriptions recorded, compared with 912,000 the previous month. MTN accounted for the largest share (35%) of total subscriptions.
We noticed subscription losses on 9mobile (formerly Etisalat) for the sixth consecutive month. There were slightly over 180,000 subscription losses on this network. We understand that there have been adjustments to some data packages within the network.
The liquidity issues experienced by 9mobile resulted in a transfer of ownership to its lenders. A bidding process for acquisition of the firm began last year, with 16 bidders indicating interest, but only five were shortlisted. Local media reports suggest that Teleology Holdings may emerge the new owner of 9mobile ahead of Smile Communications.
Internet subscription remains heavily dependent upon mobile network services. According to the regulator, internet subscription via mobile networks accounted for over 95% of total subscriptions in November.
Read Also:  KWA INTRODUCES WILD AFRICA LIQUEUR INTO NIGERIA MARKET (EXCLUSIVE PICTURES) 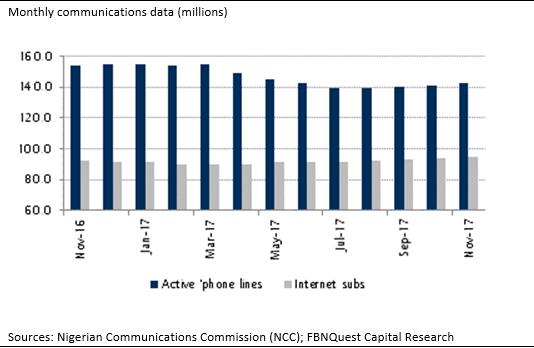 According to the NCC, 120,000km of fiber network are required to boost broadband penetration, and only 32% has been covered. The financial implication of laying fiber network across the country is estimated at N17.4bn. That is, with a unit price rate of N145/meter.

For Nigeria to become an active member of the current digital transformation within the global village, huge investments in telecommunications infrastructure are required. Broadband penetration is currently 21%.

Due to various factors, some fans might not be available to watch live sports events hence they turn to highlights. Social media is now...
Read more
Business & Economy

International migration to fall in 2020 for the first time in recent decades WASHINGTON, October 29, 2020 — As the COVID-19 pandemic and economic crisis continues...
Read more
Telecom & IT

Google’s Share of Global Digital Media Revenues Declined By 2.7% in Q2 To A Six-Year Low

While it is still the world’s largest digital media company by some distance, Google’s digital media revenues fell by 7.0% in Q2 2020 to...
Read more
Transportation

British Airways will operate 52 long haul routes alongside its short haul network this November as the airline continues to adapt to changing restrictions...
Read more
- Advertisement -

Veteran business growth executive, Stjepan Udovicic, has been appointed the Chief Commercial Officer of 9mobile by the Board of Directors of Emerging Markets Telecommunication Services...
Read more

After two years of studying music from some of the country’s finest teachers, the 2020 graduating set of the Musical Society of Nigeria’s (MUSON)...
Read more
- Advertisement -