We are forecasting a sharp fall in year-on-year headline inflation to 14.75% for February 2018, after a steep decline from January’s inflation of 15.13%. Apart from being the 13th consecutive monthly drop in inflation, the rate of decline has increased from the previous month’s deceleration of 0.24%.

Our forecasting methodology is based on a simple regression model and empirical analysis, spiced with some qualitative reasoning. We expect month-on-month inflation to increase to 1.01% (12.82% annualized).

During the month, certain price moderating factors were noticeable. These include:

However, there was one price propelling factor which had a limited impact on inflation. This was the lingering fuel scarcity in the country. 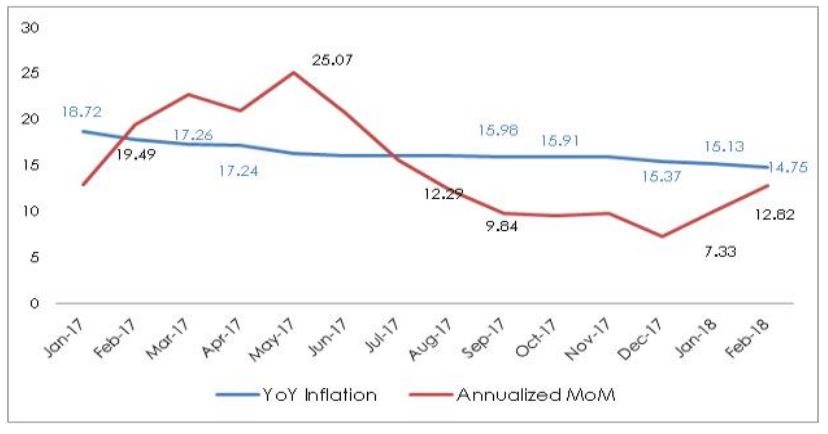 Core inflation (inflation less seasonality) is expected to drop marginally to 12.06% year-on-year in February from 12.10% in January, owing to an improvement in power supply from 3,690MW/hr in January to 3,937MW/hr. The stability of the naira has also tapered core inflationary pressures.

With the harvest season over and the planting season commencing, food inflation is expected to taper to17.8% year-on-year in February from 18.61% in January 2018. However, month-on-month, food inflation is projected to increase to 1.02% (12.89% annualized) from 0.87% (11% annualized), due to higher prices across
the food basket, especially grains.

Most SSA countries under review recorded a decline in headline inflation. The decline was due largely to a slowdown in the prices of food, transport, housing, and utilities. Logistics and utility costs in these countries remain vulnerable to global oil prices. The monetary policy stance of most African economies has been
unchanged so far in 2018.

The MPC is scheduled to meet in March, assuming a quorum is formed on time. The mix of a sub-optimal growth rate of 0.8% (2017) and an anticipated decline in inflation increases the possibility of adopting an accommodative monetary policy (lowering interest rates) at this meeting.

Since the outbreak of COVID-19, the NBS has been conducting impact surveys, assessing the welfare of Nigerians. The latest survey conducted in Jan-2021 provides...
Read more
- Advertisement -