Startimes has won the right to broadcast the matches of the Spanish LaLiga to its teeming subscribers. This comes...
Read more 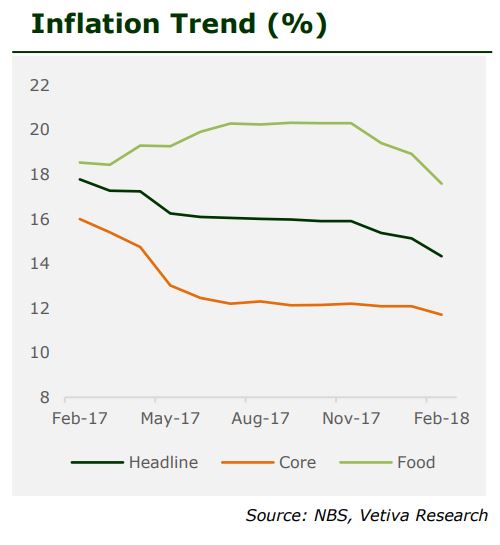 Inflation is calculated by looking at corresponding numbers of the Consumer Price Index (CPI). The CPI is a measure that examines the weighted average of prices of a basket of consumer goods and services over time, relative to a base year. The current base year for the Nigerian CPI is 2009. Annual inflation for a month is computed by comparing the percentage change in the CPI figure for that month in the two comparison years.

Prices rose 0.8% on average in February, unchanged from January. In fact, month-on-month (m/m) inflation has oscillated within a 0.75%-0.80% band in the last six months, excluding the dip to 0.59% in December 2017. Average m/m inflation for the six-month period is 0.75%, and the rigidity in m/m inflation looks eerily close to a constant growth rate in prices. This rigidity is evidenced by a standard deviation of just 0.08% within the period, compared to 0.65% and 0.19% in H1’16 and H2’16, and 0.30% and 0.21% in H1’17 and H2’17. The same rigidity is reflected in Food Inflation, Core Inflation, and underlying inflation (excluding volatile food and energy prices) and is not found in any other period in inflation data. Whilst it is too early to draw conclusions, we highlight that a relatively constant growth rate in prices would be beneficial for planning and forecasting for all economic stakeholders. 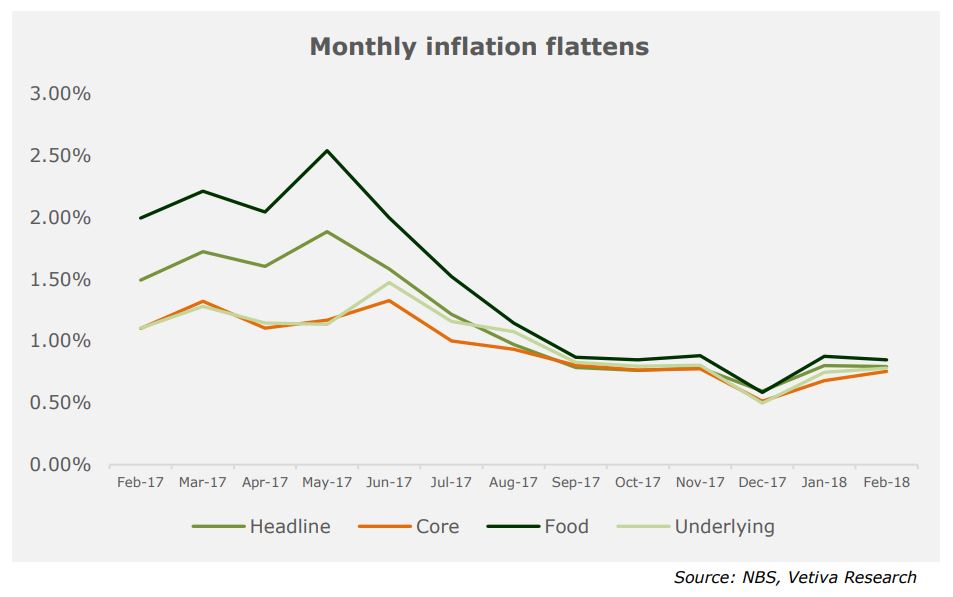 Imported Food Inflation moderated slightly from 16.2% y/y to 16.1% y/y but increased from 1.2% m/m to 1.3% m/m. In fact, m/m Imported Food
Inflation is the highest of all major sub-indices tracked by the National Bureau of Statistics – a record it has held since August 2017. This is despite improved currency liquidity and relative stability in the dollar/naira exchange rate in recent times, as well as only mild global food price pressure. On another note, whilst we acknowledge imminent excise duty hikes, we expect only a marginal effect on inflation as alcohol & tobacco products account for barely 1% of the Consumer Price Index. However, we remain cautious about the sustainability of food inflation moderation through the year in light of disruptions to farming activities as a result of the herdsmen conflict.

After rising from ₦145 in September 2017 to ₦191 in January 2018 amid a 24% rise in global crude oil prices, national average premium motor spirit (PMS) price moderated 10% to ₦172 in February. Average prices of automotive gas oil (diesel) also moderated (2% m/m) while liquefied petroleum gas (LPG) and household kerosene prices were largely unchanged in the month. Despite the fall in PMS prices during the month, they came in 15% higher than February 2017 prices; no surprise gave the 17% y/y rise in crude oil prices. We note that PMS prices remain elevated despite extended
intervention by the Nigerian National Petroleum Corporation (NNPC) to boost product supply. Data from the Ministry of Petroleum indicates that 54 million liters of PMS were trucked out each day in February 2018, compared to 37 million liters in February 2017. That prices remain high and product supply remains irregular amid this is a strong pointer to product diversion and hoarding. Meanwhile, HHK, diesel, and LPG prices are all lower y/y – we recall that NNPC intervened in these markets from late Q1’17 by boosting product supply to counter spiking prices. Overall, the story is likely to remain the same for petroleum product prices as the marriage of relatively higher global crude oil prices and the current PMS pricing template births higher realized pump prices, product diversion, and a thriving black market. 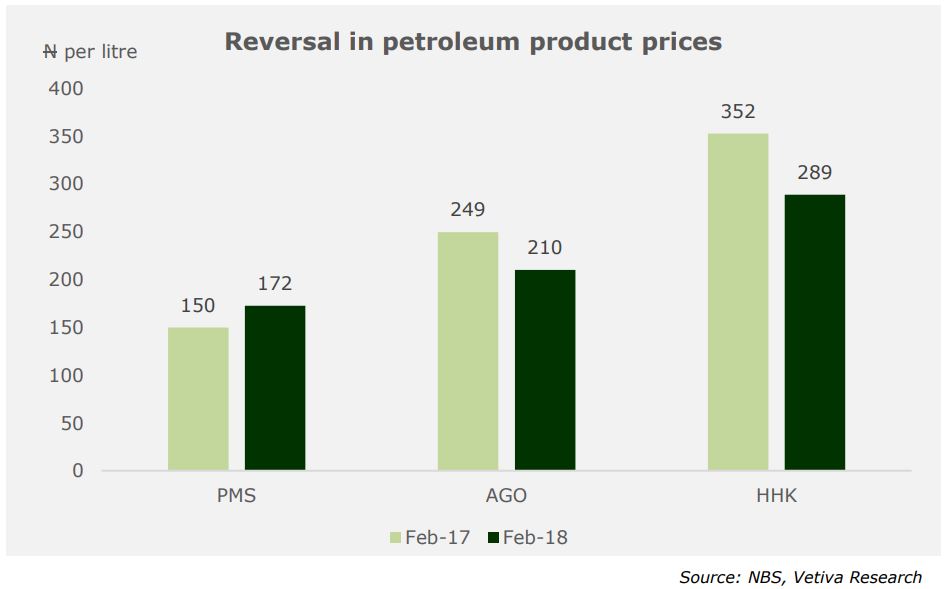 Base effects will continue to be the primary driver of inflation moderation in the near-term, especially as the effects of high 2017 food inflation begin to kick in strongly. Meanwhile, energy prices and currency pass-through remain the salient short-term concerns. We have incorporated the near-constant growth in monthly prices in recent times and also account for likely food price pressure later in the year. Overall, our inflation expectations are buoyed by rigidity in monthly inflation at a relatively low level (0.75%-0.80%). As such we forecast inflation of 13.3% y/y in March (previous: 14.2% y/y) and fullyear inflation average of 12.0% (previous: 12.8%).

71% of households do not have evidence to prove the ownership of their homes, according to the Nigeria Living Standards Survey (NLSS) report by...
Read more