The need for Nigerian youths to embrace agriculture to create employment through its value chain has been stressed.

Addressing participants at the flag-off of the ‘Youth on the Ridges’ agricultural programme, the Ondo State Governor, Arakunrin Oluwarotimi Akeredolu, SAN assured that the participants will be made to undertake in-depth training, both generic and professional, by engaging the services of experts in various fields of Agriculture.

The programme held at the Federal College of Agriculture, FECA in Akure, was a veritable opportunity for the governor to declare that on completion of their training, successful participants would be grouped into cooperatives to be able to access finances for their ventures. 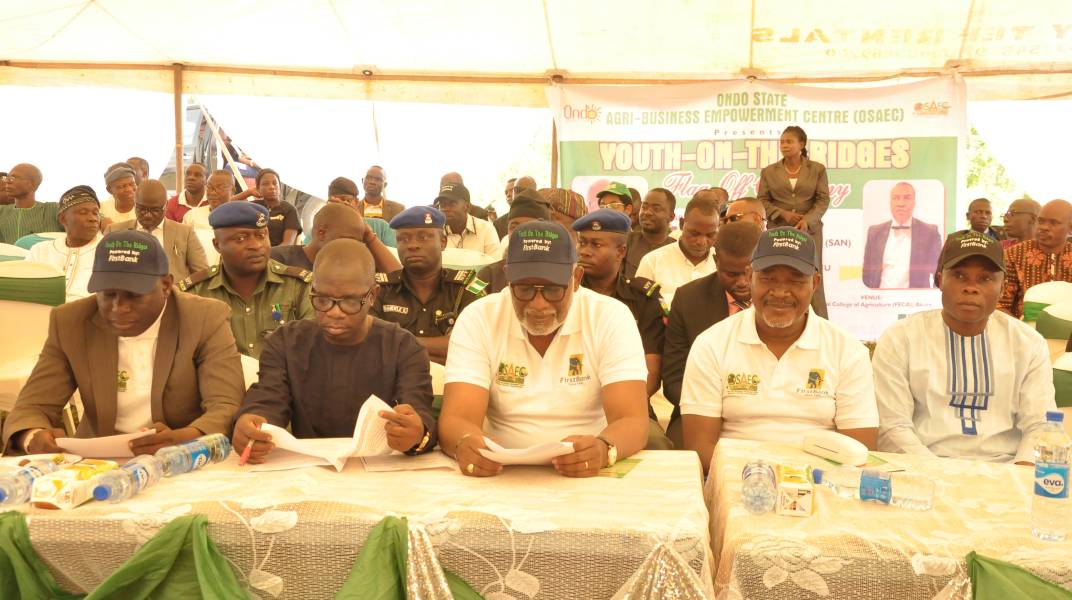 “These young men will receive training on agro-business. This scheme intends to achieve upon successful completion, two feats which are; creation of 18,000 jobs with the attendant multiplier effects on the economy and the realization of food security and wealth creation”, he assured.

The governor described the rate of unemployment in the country as alarming especially when parents resorted to feeding their graduate children owing to joblessness.

“The embarrassing rate of youth unemployment is unacceptable. It is evident that Nigeria is experiencing serious economic challenges. A situation in which about 60 percent of our youths are unemployed is deplorable. 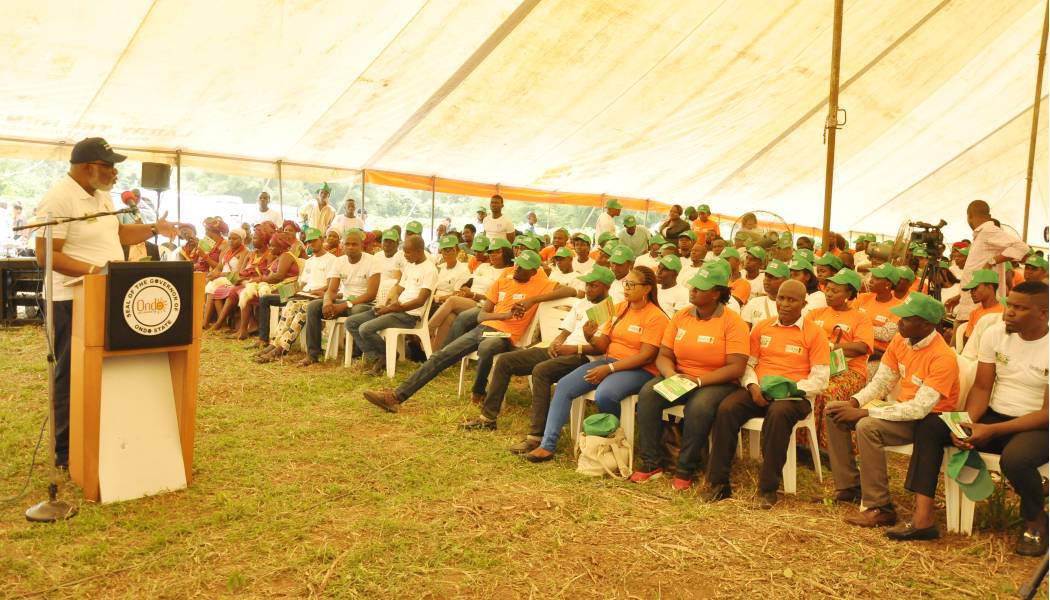 “More heart-corroding is the reality of their being unemployable. These are young men and women who, ordinarily, should constitute the workforce in a growing economy.

“Our dear state is not immune from this scourge. A large proportion of our youth are either unemployed and/or unemployable,” he said.

He explained that all aspirations towards development would remain a mirage until the youths are engaged, positively and productively.

Arakunrin Akeredolu also noted that it was sad that despite the prevalence of numerous economic opportunities, the majority of the young men and women wallow in want and despair.

“A society, which allows a class which represents a sizeable chunk of its population to wallow in misery and abject want, will experience stunted growth,” he said.

Governor Akeredolu who spoke passionately on the avalanche of potentials which include food security and employment generation believed that if the inherent values in agriculture are explored, the young farmers could become millionaires within a short time. 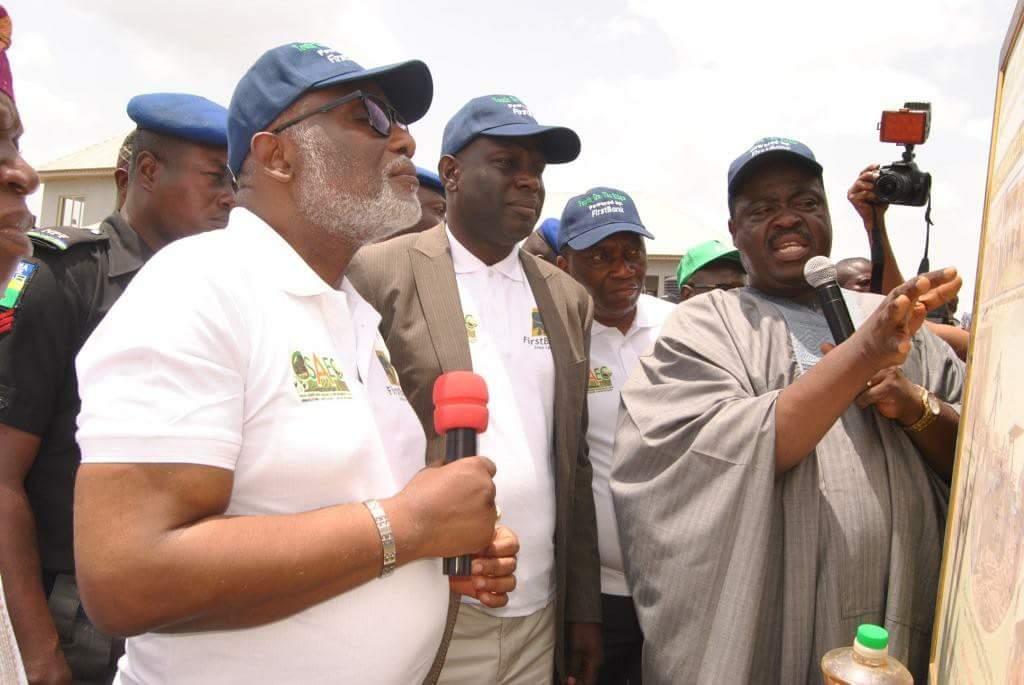 The governor assured the participants that on completion of the training on any aspect agriculture of their choice the State Government would guarantee whatever they might need to take off.

The Commissioner for Agriculture, Otunba Gboyega Adefarati hinted that the “Youth on the Ridges”, was designed to empower youths in agricultural business and engage in agricultural value chain development.

He added that the programme was a deliberate way to create awareness on improved food production, to arouse the interest of youths in agriculture and promote youth employment by engaging 18,000 youths across the state.

Otunba Adefarati added that the Akeredolu administration has created enabling environments for youths and women to take up a career in modern agriculture through some interventions.

According to him, some of the interventions include the opening of modern Agricultural Village at Jugbere with the phased establishment of Cocoa farm to be plotted on the 4-hectare basis for youth Empowerment to boost cocoa production in the state. 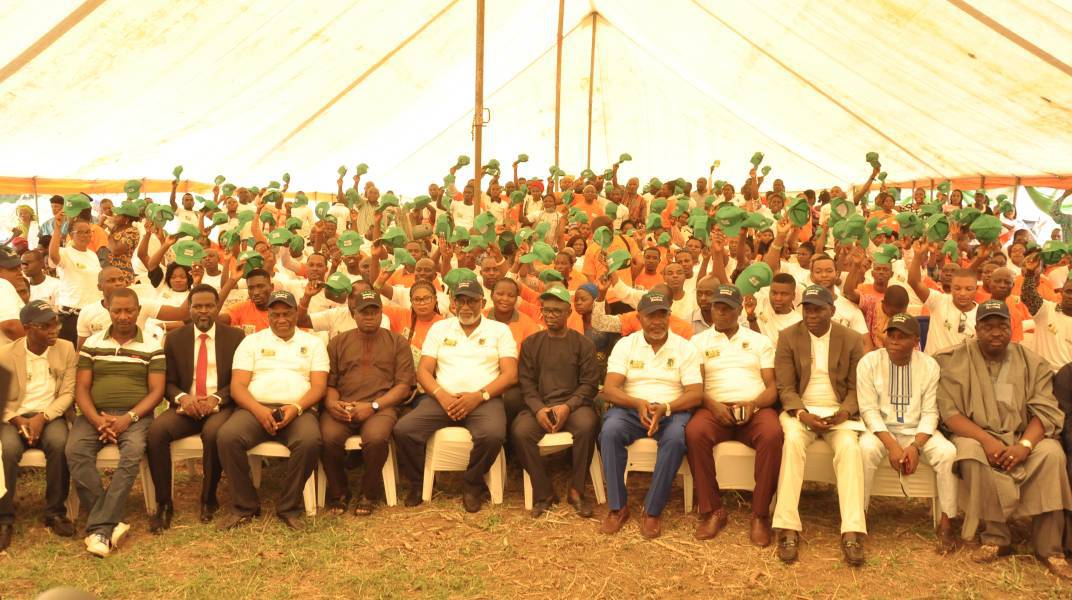 Others include training of over 2,500 youths on Cassava Value Addition by the Ondo State Agri-Business Empowerment Center, OSAEC, provision of credit facilities for youth and women under FADAMA III Additional Financing Programme and the establishment of COCASET Sugar Industry at Ikaro in Ose Local Government.

The Commissioner also mentioned the joint Venture with NNPC for the establishment of Cassava-Ethanol factory at Okeluse, facilitation of the CBN/NIRSAL accelerated National Egg production where Ondo State was selected as the pilot state among others.

He said as the state begins the drive towards the full implementation of the programme for youth employment scheme, the state could no longer rely on traditional methods of farming but embrace modern farming processes to enlist the interest of youths and ultimately free the nation from hunger. 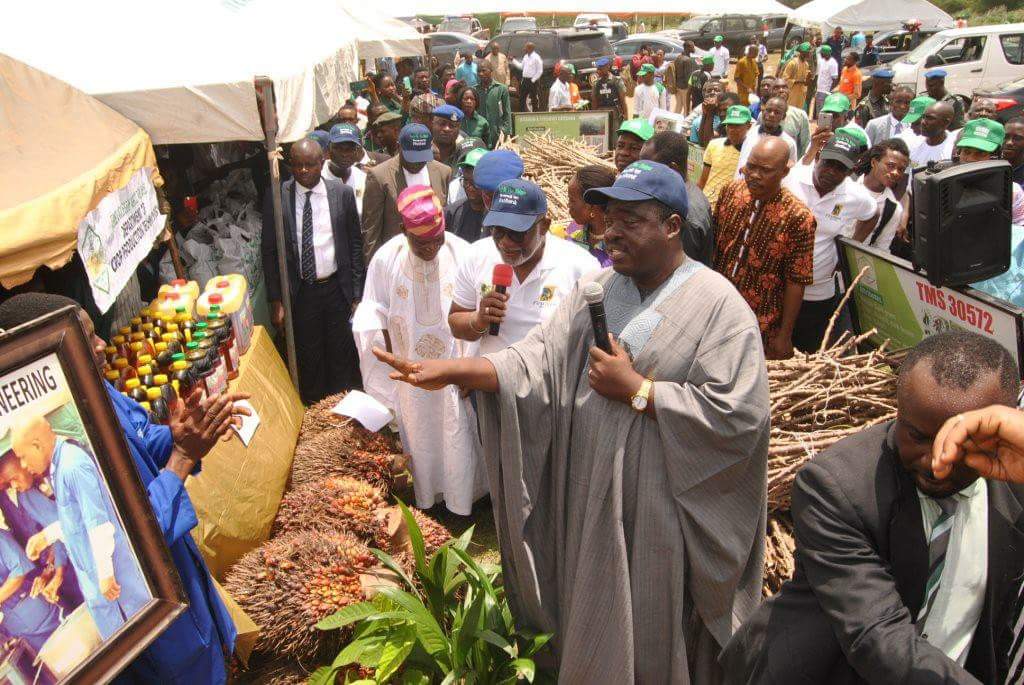 In his welcome address, the Senior Special Assistant to the Governor on Agric and Agri-Business, who is the Coordinator of the Ondo State Agri-Business Empowerment Centre, OSAEC, Pastor Akin Olotu stated that the programme was designed to raise young Agro-preneurs that will redefine farming methodologies and make farmers in the state and in Nigeria begin to tell encouraging stories.

While describing agriculture as the only profession that has the capacity to create wealth in a sustainable manner, Pastor Olotu said revenue from oil can no longer carry the burden of the country.

“Majority of our undergraduates in the faculty of Agriculture are largely those that failed to secure admission for their preferred courses. 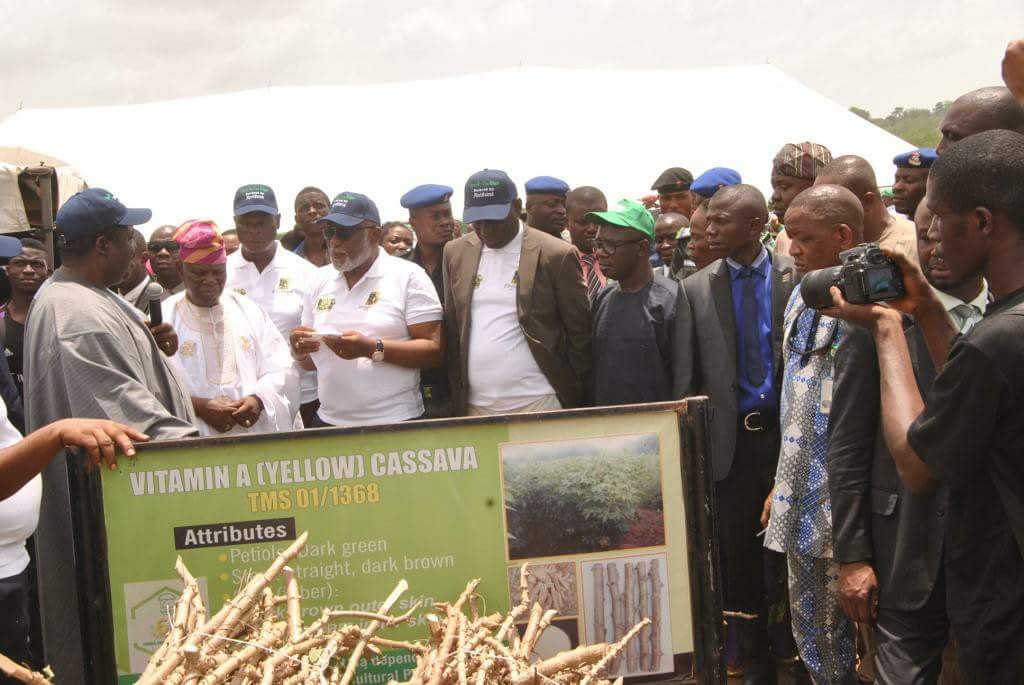 “We cannot blame the youths because farming is largely peasantry in Nigeria and it is characterized by various unpleasant challenges.

“Just as we condemn nomadic cattle rearing, we must move away from peasant farming, the two are same and are hallmarks of underdevelopment and backwardness. This is one of the challenges the Youth on the Ridges will address”, he said.

He said the initiative would help the participants on how to increase their yields, reduce costs of production and eventually turn them to agro-millionaires. 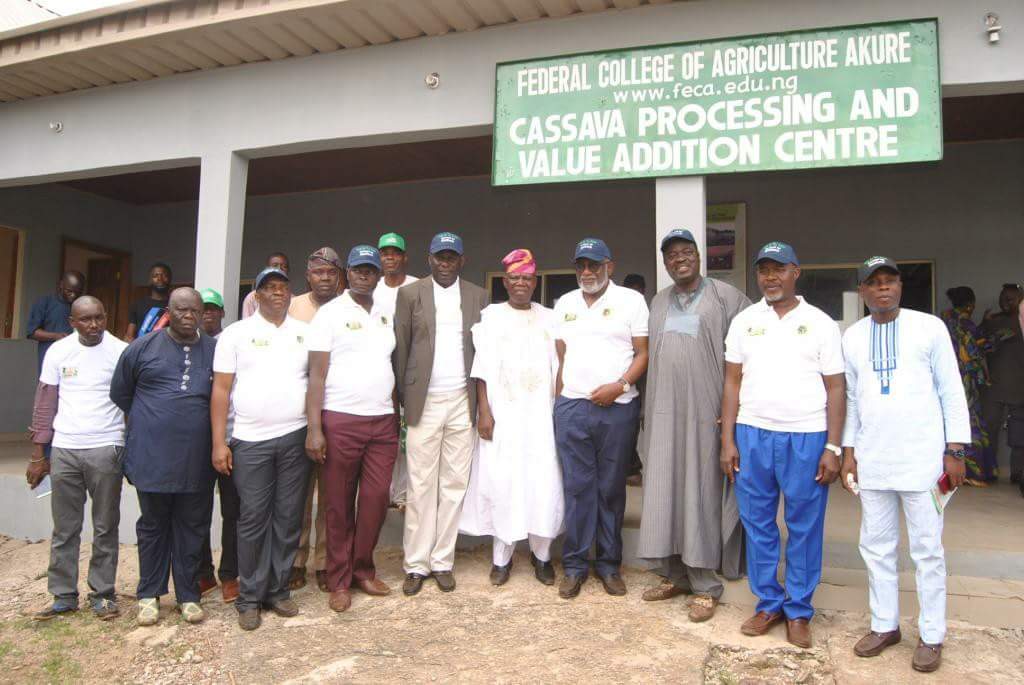 “I implore Youths on the Ridges to join us in our avowed decision to provide food for all. I have no doubt in me that these guys will feed Nigeria and the whole of Africa soonest”, he said.

The Ondo State House Assembly through the Chairman, House Committee on Agriculture Honourable Kuti Towase commended Governor Akeredolu for his commitments at transforming Ondo State across all sectors and pledged the continued cooperation of the legislature.

Partners of the programme which include: the Central Bank of Nigeria, Bank of Agriculture, First Bank of Nigeria and Nigeria Incentive-Based Risk Sharing System for Agricultural Lendings, NIRSAL gave reassuring messages of assistance to make the programme succeed and ensure that the participants become successful farmers that will emulate by their peers.

The Nigerian bourse on Friday ended the trading week on a positive note, extending the previous day’s positive sentiment. The growth was impacted by gains...
Read more
Brand News

Leading telecommunications services provider, Airtel Nigeria, has announced that it has added 0904 number series to its numbering range, following the approval of the...
Read more
News

Breach notifications exceed 160,000 in Europe since the introduction of GDPR according to a survey by DLA Piper European data protection regulators have imposed EUR114...
Read more
Entertainment & Lifestyle

The Monetary Policy Committee (MPC) concluded its two-day policy meeting today. The committee agreed to raise the cash reserve ratio to 27.5% (from the...
Read more

The Nigerian bourse on Friday ended the trading week on a positive note, extending the previous day’s positive sentiment. The growth was impacted by gains...
Read more

Leading telecommunications services provider, Airtel Nigeria, has announced that it has added 0904 number series to its numbering range, following the approval of the...
Read more

Breach notifications exceed 160,000 in Europe since the introduction of GDPR according to a survey by DLA Piper European data protection regulators have imposed EUR114...
Read more