Nigeria: Another Decent Outcome For The DMO

Brand Spur
- Advertisement -
At this week’s monthly auction of FGN bonds, the DMO offered N80bn, attracted a total bid of N143bn and raised N64bn (US$210m) from sales. It has therefore raised N254bn in Q1, compared with N430bn in the same quarter period of last year.
The DMO achieved what we might term textbook front-loading of issuance in 2017 whereas this year it has been under much less pressure. The FGN’s borrowing costs have fallen sharply over six months, by almost 650bps at auction for the 364-day NTBs and by more than 250bps on the same basis for the July ’21 bonds.
These savings are considerable and could potentially give an important boost to the FGN’s plans for capital expenditure. The federal finance minister, Kemi Adeosun, said before the two latest Eurobond launches (November 2017 and February) that the issues should create annual savings of N168bn on debt service.
The estimate factored in the element of “externalization” in official debt strategy. This is visible in the FGN’s changing domestic debt profile: the stock of NTBs declined by N200bn in Q4 because the authorities deployed some Eurobond sale proceeds to pay down maturing T-bills (Good Morning Nigeria, 19 March 2018).
The minister did not share the interest rate assumptions underpinning the estimate of savings. About half the yield compression of the past six months has come in the past three, so the assumptions may be in need of revision. 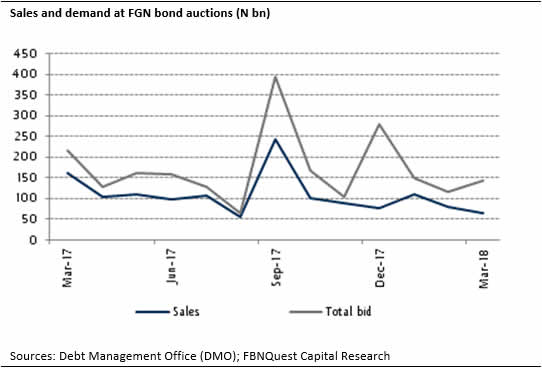 The DMO can also step back a little because it has more products to offer. 2017 brought its first Sukuk and its first green bond issue, raising N100bn and N11bn respectively. The federal environment ministry has suggested that it could collect a further N150bn from green bond sales this year.

Konga Travel: Here is the best time to travel for pregnant women

According to the latest research from Strategy Analytics, global 5G smartphone shipments reached 19 million units in 2019. Demand was much higher than expected. Huawei...
Read more

Konga Travel: Here is the best time to travel for pregnant women