The sort code is a number that usually identifies both the bank and the branch where an account is held. The sort...
Read more
- Advertisement -
The FGN’s total domestic debt service payments have doubled in five years, from N701bn in 2012 to N1.48trn last year. From our chart, we can see a bunching of payments on FGN bonds, and therefore of total debt service, in the first and third quarters.
The FGN’s budget proposals for this year project the total excluding sinking fund contributions at N2.03trn, of which we estimate that 90% is payable on domestic obligations. We expect an undershoot on this debt servicing bill because we can glimpse the proverbial light at the end of the tunnel.
On the basis of total domestic debt service payments last year and the mid-2017 stock of domestic debt, we arrive at an average cost of borrowing of about 12.3%.
This is not to be confused with an average interest rate. The NTBs, which account for close to 30% of the FGN’s domestic debt stock, are discount instruments and do not pay a coupon.
The light comes from the decline in yields on FGN paper over the past six months: of close to 650bps for the 364-day NTBs sold at auction and by over 250bps for the July ’21 bonds sold by the DMO.
This compression has been driven by the FGN’s strategy of externalization of its debt. Doubters might focus on external debt servicing costs, which averaged just 3.1% in 2017. These ranged from 5.0% on the Eurobonds to 1.3% on African Development Bank loans. 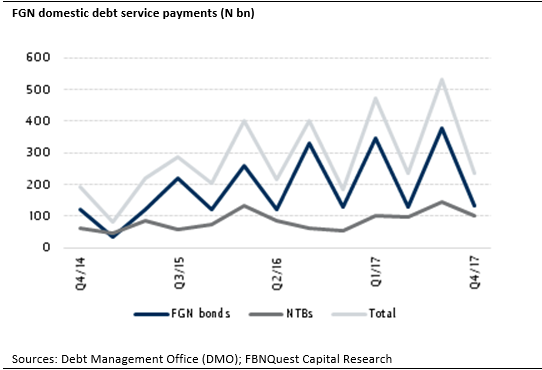 A note to the DMO’s data sheet explains that the FGN bonds and NTBs maturing during last year were refinanced. The only principal payments were made on the legacy Treasury bonds.

The FGN Bonds market traded with mixed sentiments today, with some demand seen on the mid-end of the curve (2027s -2029s) while the long...
Read more
- Advertisement -