Update: PZ just published 9M-18 and Q3-18 results which fell well-short of broad expectations, in line with management guidance two weeks ago. Management had guided that trading conditions have been unusually challenging thus far in H2 and expect its profits over the period, and indeed for the year ending May 2018, to fall short of expectations. Reported Q3-18 revenue and net profit fell short of our estimates by 15% and 49% respectively. 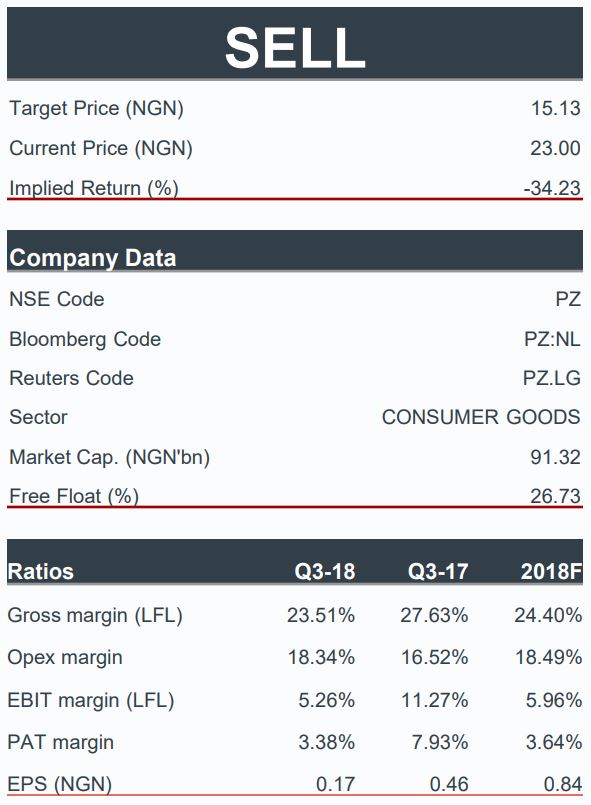 Revenue development: Q3 revenue was lower by 7% y/y and 0.4% q/q. This is the company’s first q/q revenue decline, in a seasonally-supportive quarter, within the period of available data (February 2013). The key factors that management recently informed us are responsible for the current revenue challenge include (1) weak consumer’s discretionary income, with subdued buying levels, (2) increased local competition, amidst improved dollar availability to importers, and (3) lower crossborder sales, affected by Sudan (inflation recently hit 54%), wherein currency devaluation impacted adversely on discretionary spending. 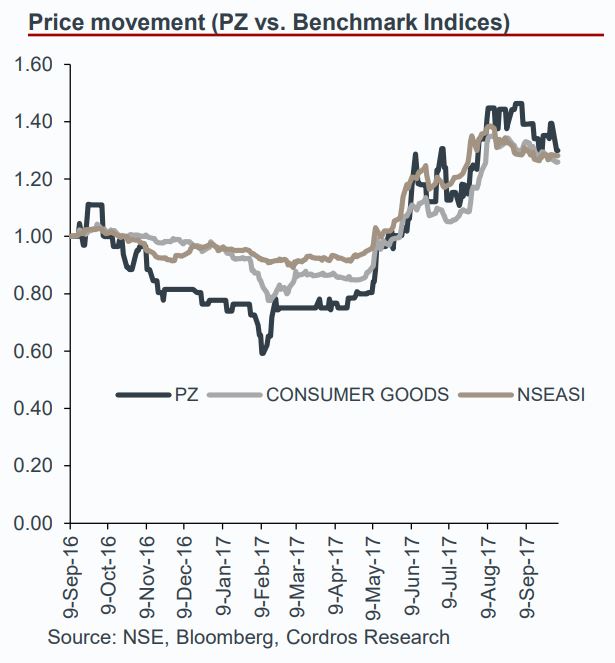 Weak margins: Gross and EBIT margins also weakened on y/y (412 bps and 602 bps respectively) and q/q (148 bps and 49 bps respectively) bases. Management mentioned in a recent trading update that intense competition is resulting in lower prices and margins in some product categories. We should state that compared to UNILEVER, PZ’s margins are yet to recover from the 2015/16 and 2016/17 FXinduced pressures. Compared to our estimate, the published Q3-18 gross and EBIT margins are lower by 149 bps and 285 bps respectively. Although opex was lower than we estimated, the ratio was higher, owing to lower revenue outturn. 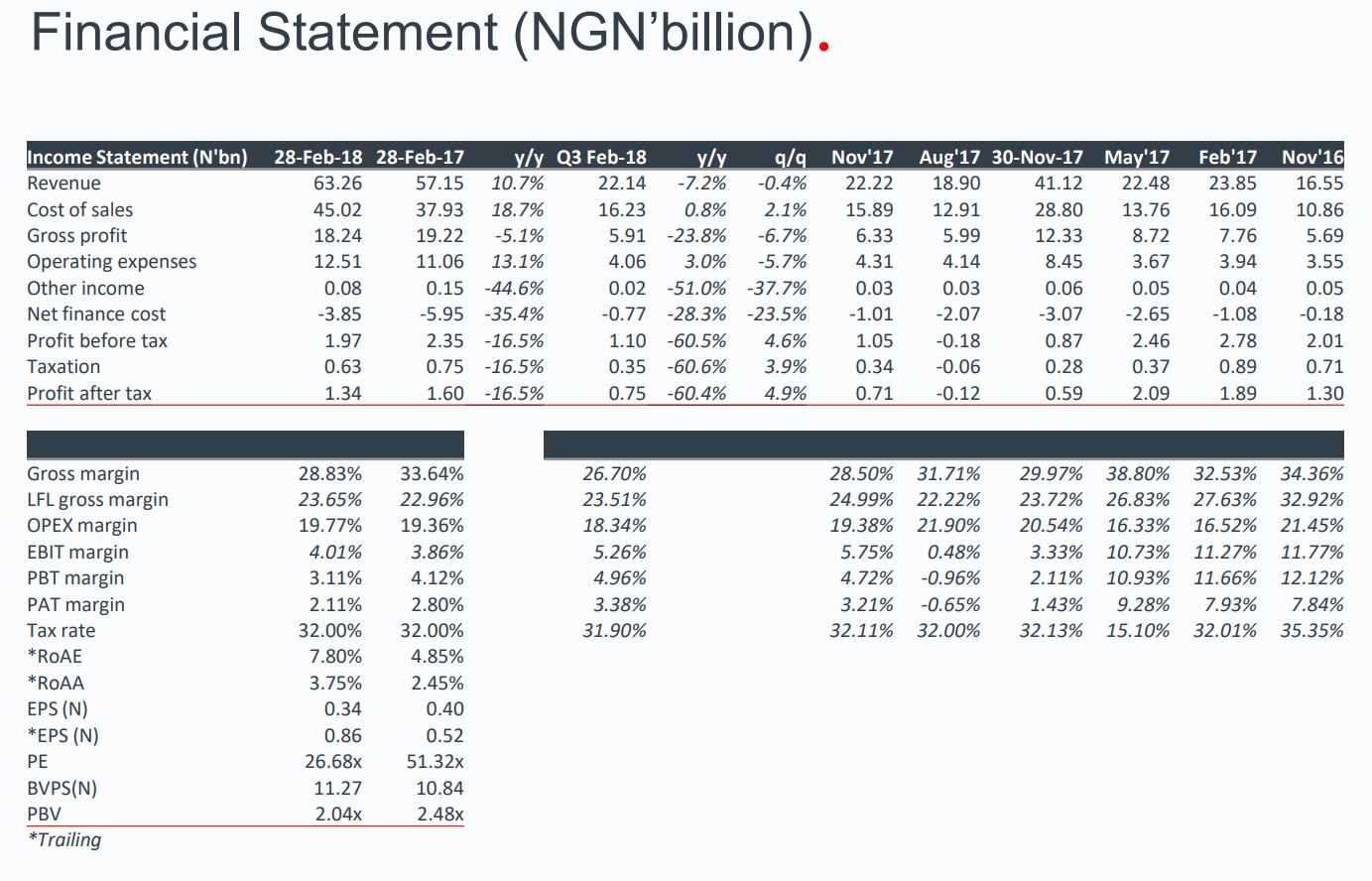 Proposed management response: Part of measures management said it is implementing to support sales in the immediate include sizeable discounting, improved (but on very selective basis) credit conditions, and better distribution. New product launches are also planned in the Electrical division.

And to ease margin pressure, the Group said it has initiated some remedial actions, including a (1) reassessment of the structure of its operating model to further reduce the overhead base, (2) review of product costs with a focus on areas such as packaging reduction, and (3) re-prioritisation of the new product pipeline to focus on fewer, bigger projects requiring lower levels of complexity. 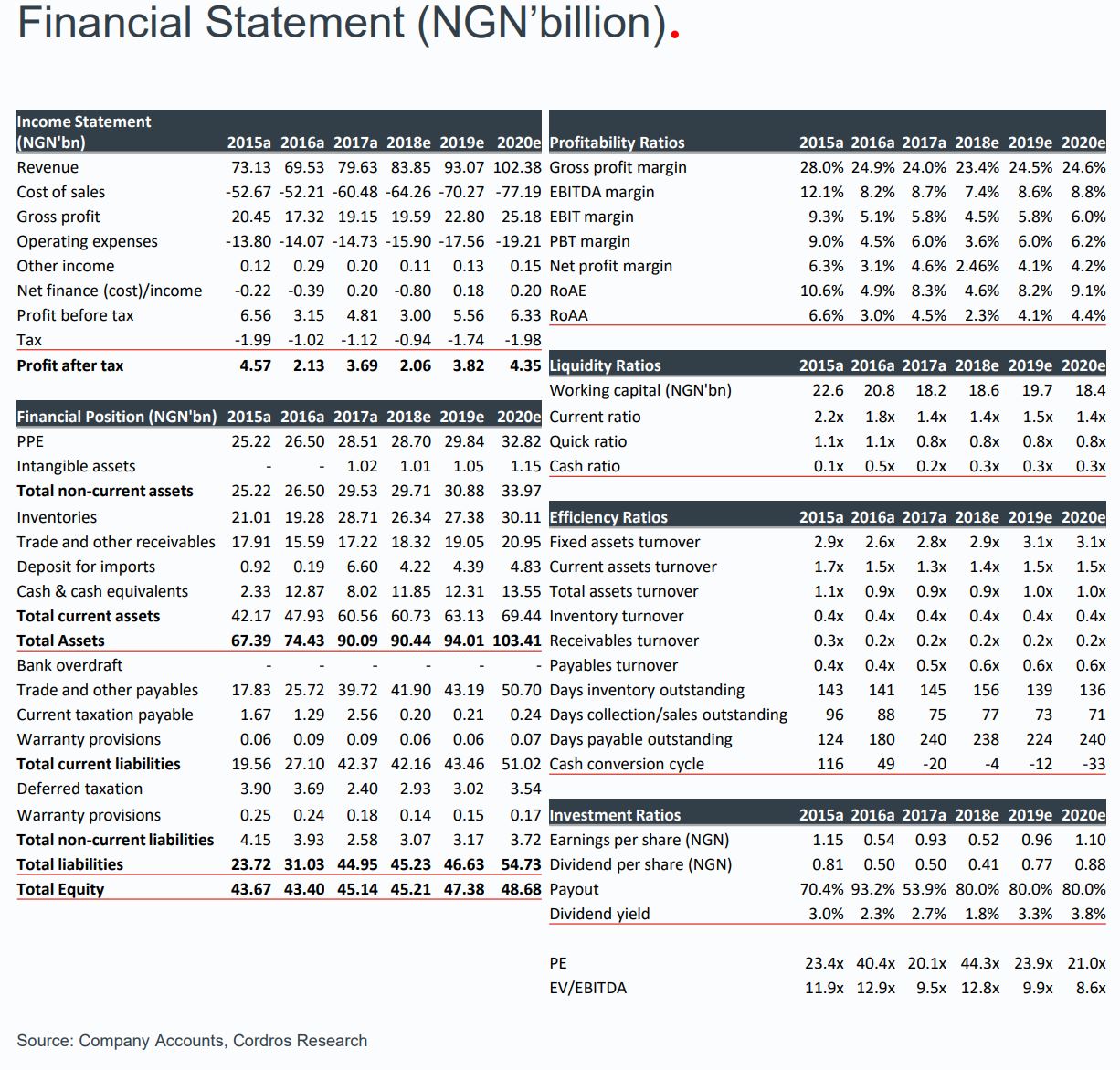 Review of our estimates: In our note – “Parent company confirms challenging H2!” – published on 16th March 2018, we noted that the tone of PZ parent company’s (PZC) communication of earnings warning (for the Group) at the time had raised concern for us that the decline in 2018E net profit might be bigger than the 7% we expected. The guidance provided by PZC was for 18-23% decline in Group 2018E PBT vs. 2017FY. On our revised estimate, we now expect the Nigeria 2018E net profit will be lower by 44%, following the downward revision of revenue and margin estimates, and the upward revision of estimate for finance charges. Net earnings estimate for 2019-2020E was revised lower by 6% average.

Valuation: We have rolled forward our model estimates and valuation to 2019E. Hence, the impact of the above changes to estimates was insignificant on the stock’s TP (NGN15.13, vs. NGN15.19 previously). SELL rating maintained. On our estimates, PZ is trading at 2018E P/E and EV/EBITDA multiples of 23.9x and 110x respectively, relative to MEA peer averages of 28.2x and 14.4x respectively.

Jaiz Bank Plc, the premier non-interest Bank in Nigeria has commenced its online coding camp that will be featured...
Read more
Business & Economy

The new consumer drivers for the post-pandemic age

COVID-19 and recession mean the next 18-24 months will be a difficult time in which resilience planning will be essential for businesses everywhere; a...
Read more
Brand News

Jaiz Bank Plc, Nigeria’s premier non-interest bank has been awarded as the Most Improved Islamic Bank 2020 in the world by the Global Islamic Finance Awards...
Read more
Opinions

The Board of Directors (‘the Board) of PZ Cussons Nigeria Plc (‘the Company’), hereby announces the following exit and appointment: 1. EXIT – MRS ABIOLA...
Read more

PZ Cussons in its most recent published Q1 2019/2020 earnings report recorded losses due to slowdown in topline amid an increase in the cost...
Read more
- Advertisement -