World Sports Day: A Call for Revival of the Nigerian Sports Sector for Development & Peace

April 6th was declared the International Day of Sport for Development and Peace (IDSDP) by the United Nations (UN) General Assembly in 2013 and has been celebrated each year since 2014. It is an annual celebration of the power of sports to drive social change, community development and to foster peace, tolerance, and understanding. From time immemorial, sports has led a vital role in the world, whether it is in the form of competitive sports, physical activity or play.  All forms of Sports have been widely used as a tool to achieve cost-effective and great results in humanitarian, development and peace-building efforts by governments in various countries, non-governmental organizations (NGOs), development agencies, sports federations, armed forces, the media, etc. Therefore, in some societies, sports has been considered as an important investment, particularly in developing countries.

Sports has the capacity to foster unity and peace and can also enhance self-development, hence, it can be explored as a great way to unite a polarized society like Nigeria. Sports also help individuals to maintain healthier and more disciplined lifestyles. These can transform wealth in the Nigerian societies because when united, the nation can achieve more and it is only a healthy and disciplined people that can be productive at school and at work. Given the potentials of the Nigerian sports sector in fostering peace and development, it is currently riddled with various challenges ranging from corruption to a lack of funding, a non-functional nationwide sports policy to drive the vision of sector amongst others. In line with this, in a “Nigeria @ 57” interview with BusinessDay in October 2017, Mitchel Obi the President of the International Sports Press Association (AIPS) Africa, stated that the Nigerian sports sector has remained unchanged in terms of growth and development from 1960 till date. The sports veteran also said “It’s sad that at this stage, the leadership of this country does not consider sports as a catalyst for her developmental effort; that is the fundamental drawback. Sports is a veritable attraction for the teeming Nigerian youths.” 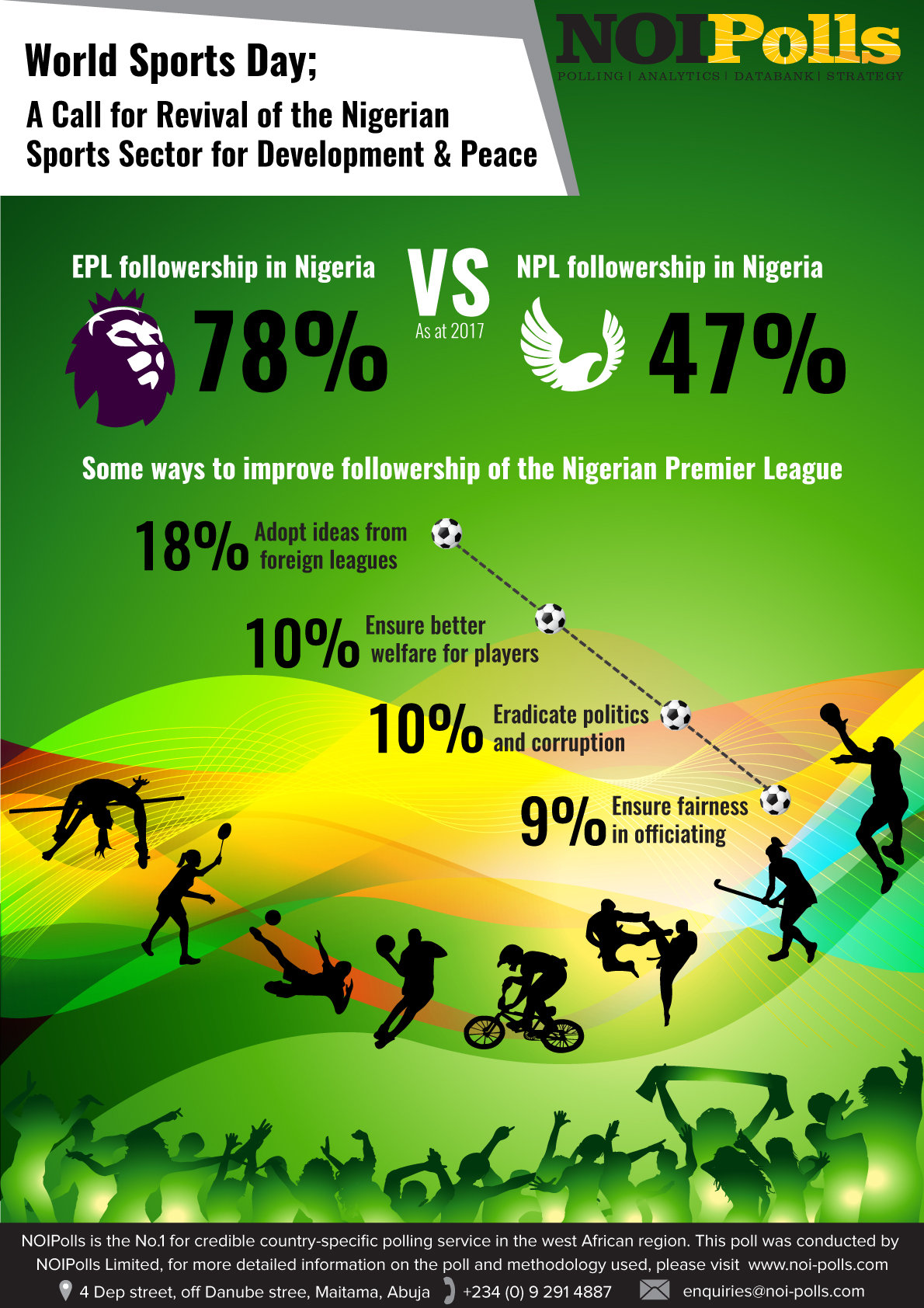 In commemoration of the 2018 International Day of Sport for Development and Peace, NOIPolls reflects on findings from its past football poll conducted in August 2017. Some of the key highlights from the poll revealed that most (53 percent) Nigerians claimed that they do not follow the indigenous Nigerian Premier League (NPL) and 25 percent of those who do not follow the NPL said it was because they do not find it interesting, compared to the English Premier League (EPL). Also, Nigerians gave suggestions about what should be done to improve the NPL followership; these include ‘Adopt ideas from foreign leagues’ (18 percent), ‘Ensure better welfare of players’(10 percent) and ‘Eradicate politics and corruption’ (10 percent), amongst others. The economic and socio-cultural impact of football, like every other form of sports, cannot be overemphasized.

There is no doubt that the Nigerian sports industry has struggled for attention and investments over the years as the Nigerian government has invested very little in sports, a lot more has to be done to get more investments from the private sector to completely revitalize the league so that it can start yielding positive results. Any support from the government to the sports industry must be professionalized and transparent with clear targets set that to drive enterprise. The government can also use sports to engage the set of demography that is poorly-educated, poorly skilled and unemployed, whose population has increased exponentially, from the grassroots via elementary schools through to professional classes. This can translate to direct job creation within those categories as athletes, sportspersons, trainers, agents, coaches, referees, sports writers, mediators, and other sports officials or administrators, etc.

Furthermore, as the report has revealed that most Nigerians barely follow the NPL because it is not interesting, the Nigerian government needs to study and emulate the kind of financial support that other foreign governments give to their sports industry. Such support would bring about positive changes in the Nigerian sports industry which would, in turn, rekindle the interest of the Nigerian masses in the various sports competition we have around. For example, the British government gives the Football Association (FA) about 30 million pounds yearly, as a form of support for the development of the local (grassroots) game. In the same manner, if the Nigerian Premier League gets such support from the government, it is likely to interest the populace and garner more followers which would in turn bring about economic gains. The issues of lack of funding, allegations of bribery against match officials and insecurity are some of the major factors bedevilling the sector which government must curtail quickly.

Finally, there should be some level of engagement between the leading sports players and the nation’s top economic brains to find common grounds. The government through the Sports Ministry also needs to formulate policies and reforms that would encourage a mutual public-private sector partnership for sports to be seen as part of the plans for a post-oil economy as it is capable of salvaging the dire situations the nation is currently in. The sports industry has an almost infinite power not only as a unifying factor but to also add real gross value to the GDP of the nation, thereby, engendering development. Also, as various opportunities are being explored in the sports industry of the country, rapt attention must be placed on gender parity by promoting female-oriented sports too because viewership for women’s sports is significantly lower than men’s. The degradation of women in male-dominated sports needs to stop, making it imperative to recognize and celebrate female sports as well, so as to entrench gender equality in the industry. In a nutshell, since sports is recognized as an important enabler of sustainable development, the Nigerian sports industry needs an urgent revitalization so that the role of its local sports can be recognized for ‘social progress’ according to the 2030 Agenda for Sustainable Development Goals.

In line with Rule 1.1 of the Rules Relating to Board Meetings and General Meetings of Issuers, Cornerstone Insurance PLC (“The Company”) wishes to...
Read more
MEDIA OUTREACH