A new public opinion poll by NOIPolls has highlighted mixed reactions trailing President Buhari’s recent declaration of June 12th as Nigeria’s new Democracy Day. The latest poll of 1,000 respondents nationwide, which was conducted on the week commencing 11th June 2018, revealed that fifty-six per cent of Nigerians (56 per cent) say they are in support of the President’s declaration; while 44 per cent say they are not in support of the declaration. This came on the heels of the finding that almost 8 out of 10 respondents (79 per cent) interviewed said they were aware of the recent declaration by President Buhari to commemorate June 12 as Nigeria’s new Democracy Day. 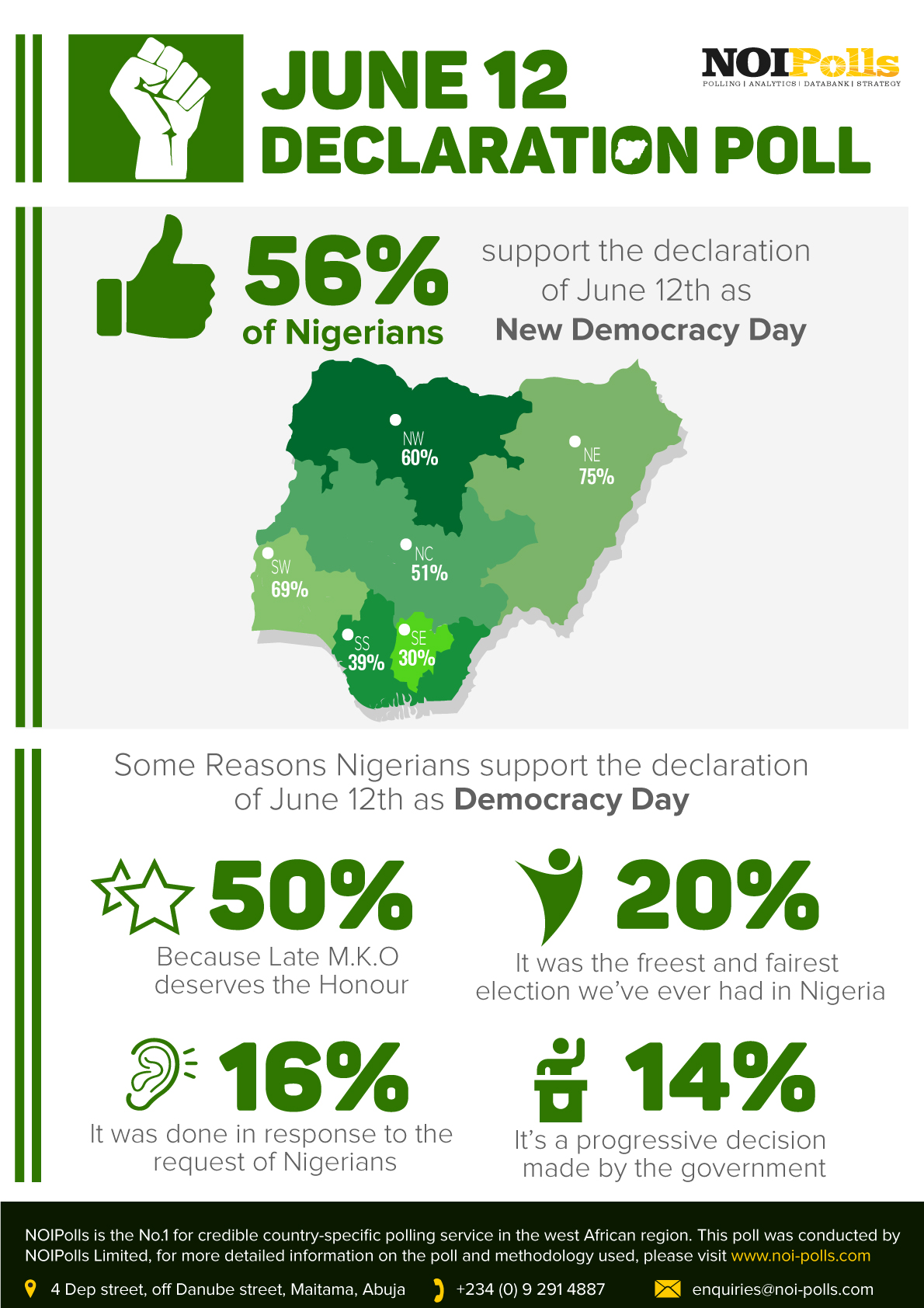 Interestingly, the findings highlighted a number of socio-demographic differences. The data showed that while the North-East (75 percent), South-West (69 percent) and North-West (60 percent) geopolitical zones constituted the zones with the highest level of support for the President’s declaration; the South-East (70 percent) and South-South (61 percent) regions constituted the bulk of respondents that are not in support of the declaration. Similarly, while respondents between the ages of 18 and 60 years (average of 56 per cent) were more in support of the declaration; senior citizens above 60 years (53 per cent) did not seem particularly in support.

The poll further probed respondents to better appreciate the reasons behind the mixed level of support towards the declaration, and the responses throw more light on the issue. On the part of 56 per cent of respondents in support of the declaration, half of them were of the opinion that Late Chief MKO Abiola, the presumed winner of the June 12th, 1993 election, deserves the honour (50 per cent).  This was followed by 20 per cent who affirmed their support for the declaration because they believe the June 12th, 1993 election was the freest and fairest election Nigeria has ever had, since independence in 1960. In addition, 16 per cent were of the opinion that President Buhari’s declaration was done in response to the yearnings and request of Nigerians; and 14 per cent perceived the declaration as a progressive decision taken by the administration of President Buhari.

On the other hand, amongst 46 per cent of respondents who are NOT in support of the June 12 declaration by President Buhari, the majority (40 per cent) were of the opinion that the declaration was not done in good faith; but is a mere political game targeted at gaining support for 2019 elections. This was followed by 35 per cent of such respondents who thought that Nigerians are already used to having May 29 as Democracy Day and there was no need for a new date. In addition, 15 per cent stated that President Buhari’s government should focus on more important issues facing the country, such as insecurity, poor infrastructure and the harsh impact of the economy on Nigerians. Finally, 10 per cent of respondents stated that the president did not follow due process in declaring June 12 as the new Democracy Day in Nigeria. They argued that he should have sent the decision to the National Assembly for their ratification.

In conclusion, the poll has highlighted mixed reactions trailing the declaration of June 12th as the new Democracy Day by President Buhari. On one hand, some social commentators and pundits have termed the action a political masterstroke and progressive action; while on the contrary, others have passed it off as a mere political strategy to boost support for 2019 elections. Nevertheless, this latest poll clearly shows that at least 56 per cent of Nigerians applaud and commend the decision by President Muhammadu Buhari to recognise the significance of June 12th, 1993 and honour the memory of Late Chief MKO Abiola, the presumed winner of the election.

Recently, President Muhammadu Buhari gave updates on the COVID-19 induced lockdown order across some States in Nigeria. The highlight of the new measures centred...
Read more