The month in review…

Purchasing Managers’ Index (PMI) data from the Central Bank of Nigeria (CBN) showed a slightly brisker expansion in economic activity in June (compared to May) amid little change in economic momentum. However, insecurity headwinds strengthened during the month, exemplified by violence in Plateau State which led to over 85 deaths in late June. The economic effect of the ongoing conflict in the Middle Belt is becoming more apparent, with month-on-month food inflation rising to 1.3% in May – the highest since July 2017. On a similarly bearish note, Nigeria’s oil production challenges persisted in June as a Reuters survey projected a further drop in output even after May’s decline (by c.50 thousand barrels a day according to OPEC). The Force Majeure on Bonny Light exports remained in place while loadings of Usan and Qua Iboe were also subject to delays, all of which would likely weigh on short-term output. Given that agriculture and oil were the primary economic growth drivers coming into 2018, the negative shocks experienced here is bad news for the Nigerian economy.

Key stories in the month

Nigeria finally passes 2018 Budget… President Buhari passed the ₦9.12 trillion 2018 Budget on the 20th of June, bringing an end to a lengthy budget process that began in December 2017. In his budget speech, the president highlighted the numerous changes made by the National Assembly to the initial budget estimates, citing a ₦347 billion cut to 4,700 projects as well as an additional ₦578 billion inserted for 6,403 new projects. We note that this furor is typical of a pre-election year where budget estimates become even more politicized and emphasize the president’s concern that the changes to the budget could make execution even harder in the run-up to the elections.

Excise duties come into effect… The Federal Government (FG) implemented new excise duties on tobacco and alcohol from the 4th of June which would be staggered over the next three years. The previous tax regime consisted of ad valoreum taxes on tobacco and alcohol and FG has now introduced excise duties on these products (the ad valoreum tax on tobacco was retained), in line with international best practice. We note that the incidence of the tax would likely be borne mostly by final consumers as demand for these products relatively prices inelastic, and expect to see higher prices and slightly weaker volumes in the future.

Tax amnesty scheme concludes… The Federal Government’s (FG) Voluntary Assets & Income Declaration Scheme closed at the end of June. The last report in early June indicated that the flagship tax amnesty program had raised ₦30 billion of a ₦300 billion target, albeit also increasing the tax base from 14 million people to 19 million people. There is no clarity on how much was raised at the end of the program, and although we anticipate an uptick near the closing date, total intake is likely to have been much less than the target.

Borrowing strategy leads to lower domestic bond sales… The Debt Management Office (DMO) sold just ₦31 billion in June (Offered ₦60 billion), much lower than in the previous month (₦50 billion) and the smallest percentage of the amount offered so far this year (52%). The total subscription was also rather low – 111% of offer compared to 128% in May and 153% in Q1’18, with closing rates remaining sticky from previous month’s levels despite an uptick in secondary market yields in the intervening period. The June sale meant that the DMO sold ₦425 billion worth of bonds in H1’18, roughly half of the total amount targeted for 2018. However, we note that 60% of this borrowing was done in Q1 and current trend suggests that the DMO may struggle to meet the year’s domestic borrowing target at current auction rates. 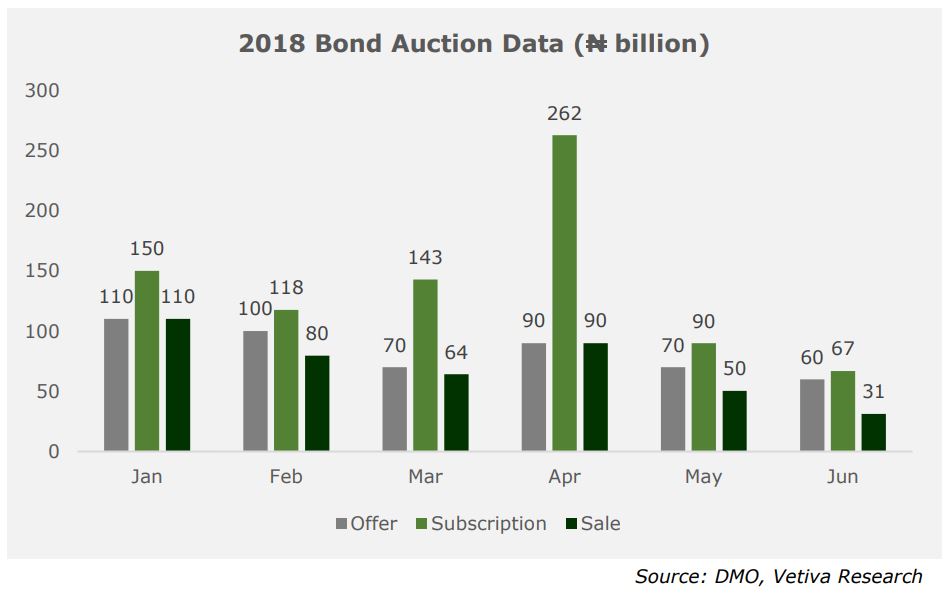 Retail Savings Bond enjoys decent month… The Federal government (FG) retail savings bond (RSB) had a successful month in June as the Debt Management Office (DMO) sold ₦368 million in total, the largest sale since October 2017, after rates were increased from 9.48% and 10.48% to 10.34% and 11.34% on the respective 2-year and 3-year papers. Demand was concentrated on the 3-year paper – ₦318 million sold in June, highest since August 2017. Notably, the DMO is offering higher rates of 10.48% and 11.48% for the 2-year and 3-years bonds respectively in July. Although we highlight that rates in the fixed income market have inched up in recent months and this may dispel interest in the RSB. Moreover, we note that RSB sales are still much lower than at inception (₦3.4 billion cumulative sales in first two months) and remain too small to make a dent in the FG’s debt profile.

Federal Government confirms external borrowing plans… The Federal Government plans to raise $2.8 billion (₦850 billion) in external debt to fund the 2018 Budget and is considering a mix of concessionary loans and Eurobonds. We note that Nigeria has been active in the Eurobond market in recent times – raising $2.5 billion already in 2018 for the refinancing of domestic debt, but also consider this to be a difficult period given the rise in global interest rates on the back of a more hawkish U.S. Federal Reserve, as well as the risk-off sentiment towards many emerging markets.

₦400 billion planned in asset sales… The Federal Government (FG) also plans to raise ₦400 billion through the sale or concession of over 11 assets, according to the Director General of the Bureau of Public Enterprises. The DG indicated that the FG is looking to sell assets ranging from power assets to sports stadium, as well as conclude an initial public offering of the Nigerian Reinsurance Company before the end of the year.

Bank of Industry launches fashion fund… The Bank of Industry (BOI) initiated a ₦1 billion fund for entrepreneurs in Nigeria’s fashion industry, in
line with the objective of boosting the country’s industrial base. Funds disbursed would attract an interest rate of 9%, lower than the current monetary policy rate (14%).

Following a slow start to the year in Q1’18 (Q1’18 GDP growth: 2.0% y/y vs. Vetiva and Consensus forecasts of 3.4% y/y and 2.6% y/y, respectively),
early indicators suggest that Q2’18 fared little better, and may be weighed down by a higher Q2’17 base (Q1’17 GDP growth: -0.9% y/y, Q2’17: 0.7% y/y). As such, we project the economy to have grown by 1.6% y/y this past quarter. We have a dimmer outlook for the second half of the year and have downgraded our annual growth expectations (from 2.4% y/y to 1.9% y/y) albeit still maintaining them above 2017 levels (0.9% y/y). This view is based on prevailing infrastructure issues in the oil sector which would likely lower oil production, as well as the ongoing conflict in the Middle Belt that pose a significant threat to agriculture output and food security. One boost should come from higher government spending in H2’18 following the recently passed 2018 Budget (₦9.12 trillion) and expected pre-election spending in the run-up to the polls. The impending elections would also stir greater uncertainty and serve to distract policy and governance at the tail-end of the year. 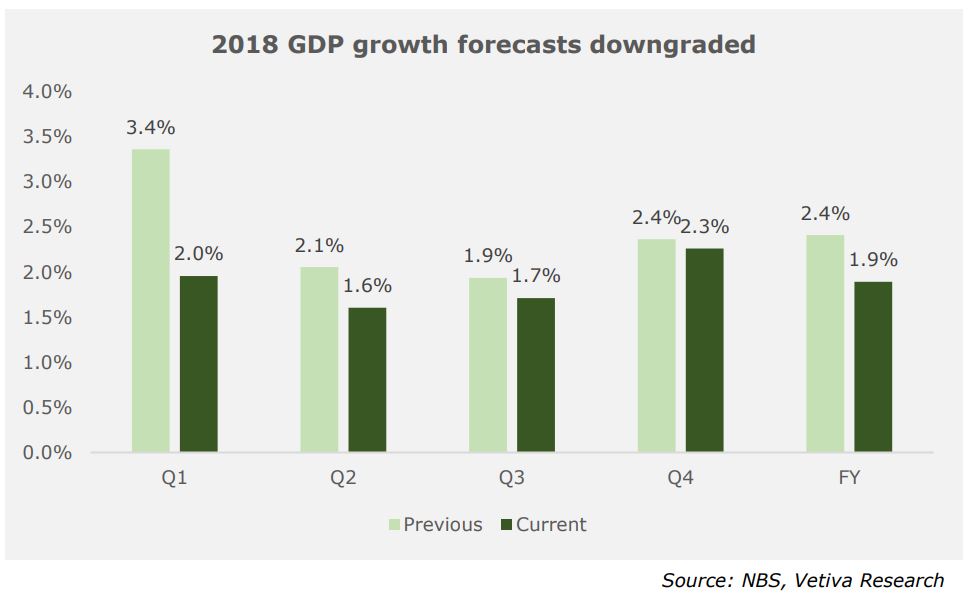 The World Bank updated its forecast for the global economy in the June edition of its semiannual Global Economic Prospects, maintaining global growth projections for 2018 and 2019 at 3.1% and 3.0% respectively. In more contemporary news, June provided a contrast in global cooperation as trade tensions worsened between the U.S. and its key trading partners while OPEC and its major allies (led by Russia) agreed to increase its joint production target by 1 mb/d (c.1% of global supply) in order to prevent future supply gaps. The decision was well received by the oil market, partly because the effective output rise would likely be much less given the production challenges faced by a host of countries (Venezuela, Iran, Nigeria, Angola). As such, oil price expectations remain strong for the rest of the year, and we expect Brent crude to average $67/bbl in 2018.

The U.S. Federal Reserve (Fed) hiked its base interest rate in June in line with market expectation, but also intimated two more hikes in 2018 – contrary to initial guidance of one more hike post-June. This decision was bolstered by a further rise in the Fed’s preferred inflation gauge to 2.3% y/y in May (above its 2% target rate) and the unemployment rate remaining marooned at its lowest point since 2000. The more hawkish Fed outlook and a stronger dollar deepened the aversion to emerging market securities and compounded a Q2’18 sell-off in emerging market assets. African economies were worst-hit as African assets underperformed in comparison to their emerging market peers in Q2, with local currency bonds feeling the tightest pinch. 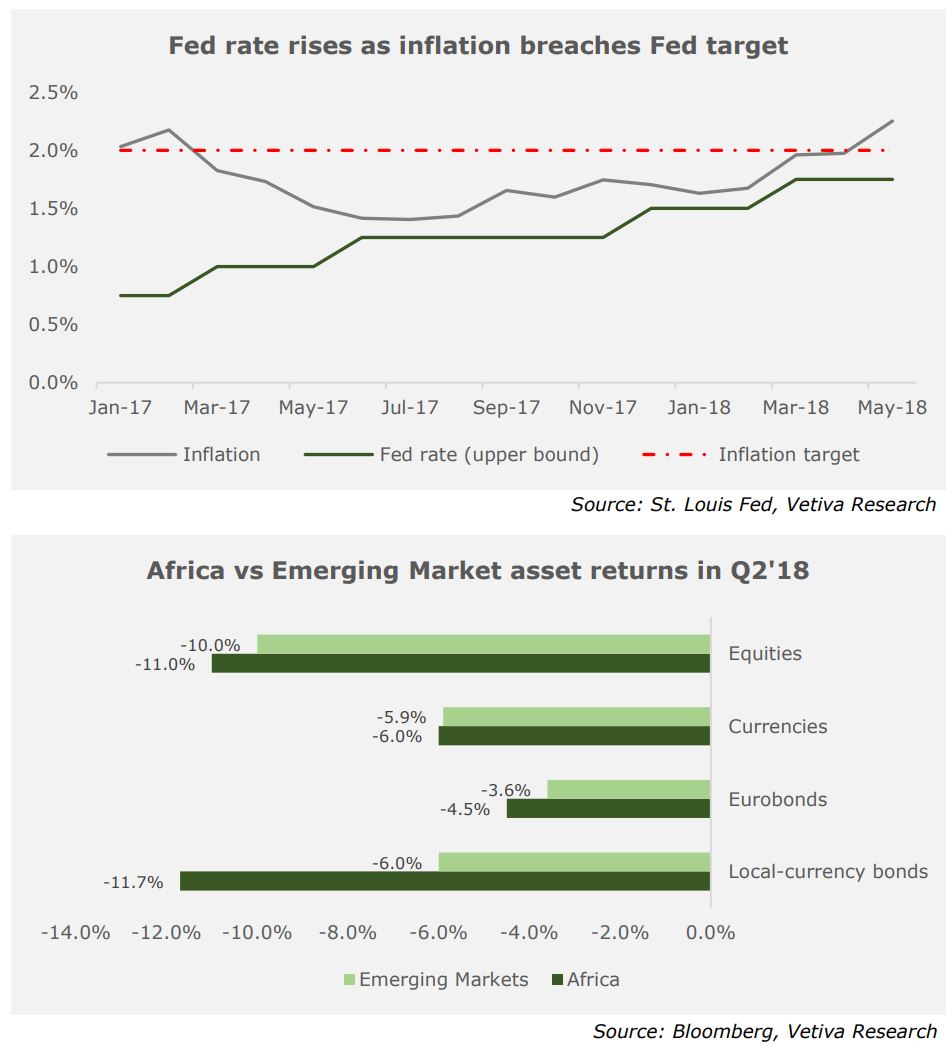 What to look out for in July…

HANOI, VIETNAM - Media OutReach - 4 April 2020 - In response to the call of the General Secretary, the President, the...
Read more
Brand News

Africa’s leading e-commerce platform, Jumia, has announced a number of actions to support the fight against the COVID-19 pandemic. “The last few weeks have been...
Read more
Health

Having observed the trend in respect of COVID-19 and the pos­sibility of its unde­terminable spread, the Government of Ondo State has ordered the closure...
Read more
Business & Economy

In the just concluded week, President Muhammadu Buhari, on Thursday, met with the Presidential Committee on the Impact of the Coronavirus on Nigeria’s Economy...
Read more
Business & Economy

Africa’s leading e-commerce platform, Jumia, has announced a number of actions to support the fight against the COVID-19 pandemic. “The last few weeks have been...
Read more

In the just concluded week, President Muhammadu Buhari, on Thursday, met with the Presidential Committee on the Impact of the Coronavirus on Nigeria’s Economy...
Read more

In the just concluded week, amid further drop in crude oil prices, especially Bonny Light which fell to USD21.41 per barrel on Thursday, April...
Read more