WHAT COULD HAVE GONE WRONG WITH THE POLLS?

Since last Saturday’s Governorship Election in Ekiti State and the announcement of the election results in favour of the candidate of the All Progressives Party (APC), I have received a number of calls from some friends and associates, seeking to understand what happened with our predictions from the pre-election polls conducted prior to the election. Some of the calls were from partners and senior friends whom we have worked with in the past and can attest to the quality of our work, and the level of professionalism we deployed in conducting our polls and surveys. There has been a barrage of questions- What went wrong? Why did you guys miss this one? Was your methodology faulty? Did you guys miss anything out in the analysis? Did you not consider the political influence and federal might as important variables in your analysis? And so on….

First things first, I wish to state categorically that the two streams of pre-election polls conducted by NOIPolls were NOT funded by any individual, organization, group or political party. They were simply in-house decisions to feel the pulse of Ekiti residents regarding voters’ preparedness and intention for the gubernatorial election. Secondly, NOIPolls wasn’t the only organization that conducted and released polls prior to the election. Our first poll was conducted between 18th and 23rd June 2018, and it put the candidate of People Democratic Party (PDP) ahead of the APC candidate by 8 percentage points. Our 2nd poll was conducted in the week of the election between the 9th and 12th July 2018; and again, it put the PDP candidate ahead of his APC counterpart by 25 percentage points. Then there was a poll by CrowdForce, released on 1st July 2018, which fell right within the margin of error of our 2nd poll and also predicted a win for the PDP candidate, with about 26 percentage points. 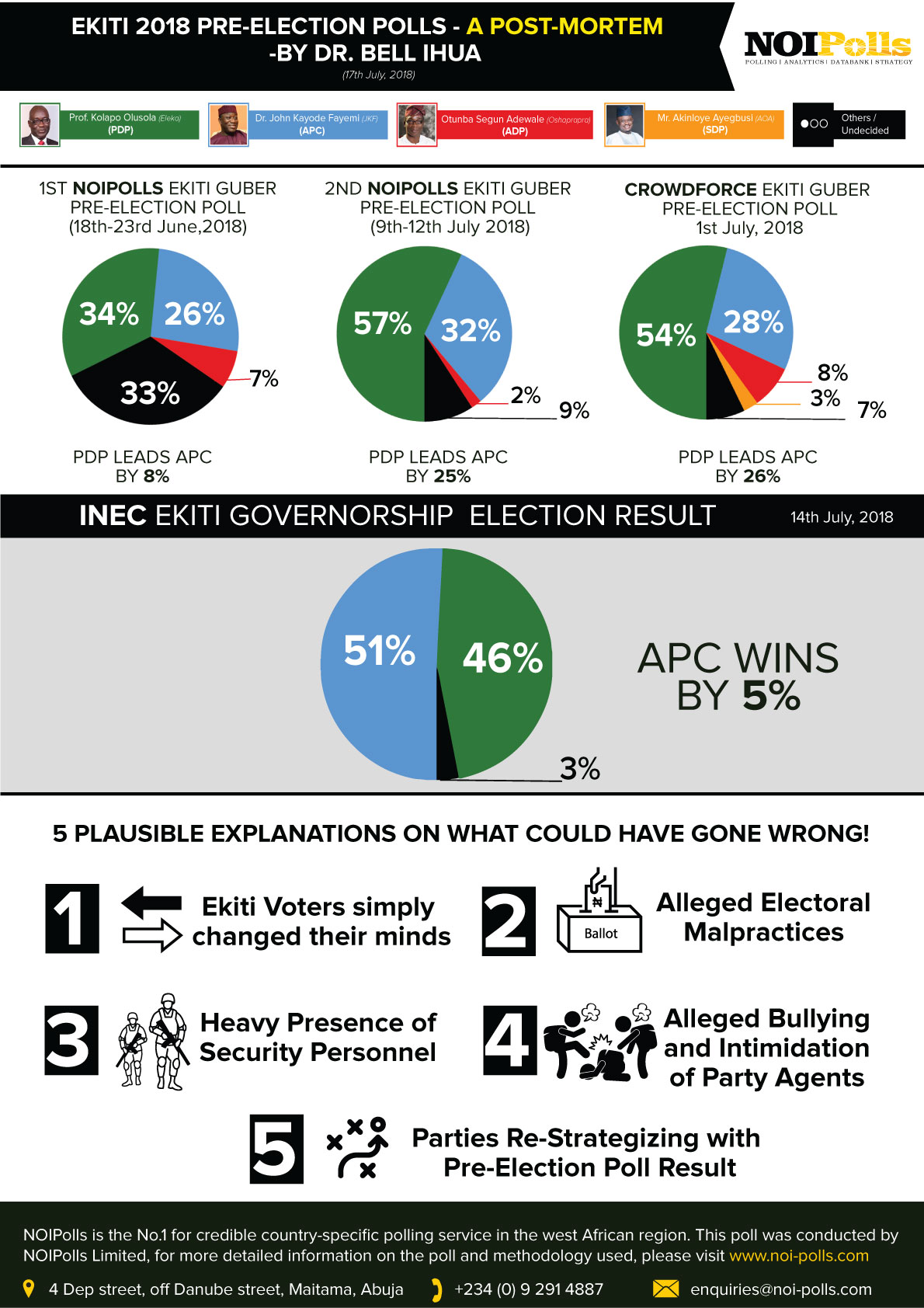 With the election done and dusted, and the announcement by the Independent National Elections Commission (INEC) declaring the candidate of the APC winner of the election and Governor-Elect (with 51 percent of total valid votes cast) over his opponent, the candidate of the PDP (with 46 percent of total valid votes cast); the question on the lips of most of our followers has been- What went wrong with the pre-election polls and predictions?

Let me commence by stating, in my personal opinion, I believe strongly that the discrepancy witnessed between the pre-election predictions and actual result released by INEC, has more to do with politics and the conduct of the election, than with the polling methodology. I wish to state categorically that the methodology applied in conducting the pre-election polls were in line with our typical rigorous and robust polling processes, and we can stand boldly to defend the outcomes of the polls. However, it’s worth noting that all over the world, results of public opinion polls have the tendency of been swayed by major happenings and events in the polity; and in the case of Ekiti, there may have been some events building up to the election day, which may have swayed public opinion.

From the perspective of an experienced pollster, I can say there are really no silver bullets to explaining what went wrong. However, I’ve had time to reflect deeply on the questions with my colleagues; and come up with 5 plausible explanations for the observed variance between the poll predictions and the actual result.

Here are my personal thoughts and I wish to share them, in no particular order, as follows:

My first plausible explanation is that Ekiti voters may have decided to change their minds on who to vote for on the D-Day for reasons best known to them. Although there have been several postulations in the media regarding what may have caused this sort of flip-flop; the Civil-Servants Factor, the non-payment of salaries and the high-handedness of the seating governor may have been some of such factors responsible for the discrepancy.

The media has been awash with reports of alleged electoral malpractices that trailed the 2018 Ekiti state governorship election. There have been reported cases and allegations of vote-buying, rigging and ballot box snatching at some polling units, leading to the cancellation of some results; and these may have contributed to the observed variance between the pre-election prediction and the actual result.

Read Also:  Evaluating Agriculture Finance in Nigeria: Towards the US$1 trillion African food market by 2030

Prior to the election, the Nigerian Police had announced the deployment of 30,000 police ocers to Ekiti state. Similarly, there were reports of heavy presence
of the Military and Civil Defence personnel in the state; and incidents of dispersing of crowds with the use of teargas canisters It is instructive that these may have restricted movements and discouraged some voters from coming out to exercise their franchise, in fear of not wanting to be harmed. As the post-election data from INEC revealed, only 405,861 persons were accredited to vote, out of the 909,585 registered voters and 667,270 voters that collected their PVCs in the state; indicating over 55 percent of registered voters who for some reason decided not to participate in the process.

Finally, one factor that cannot be ruled out as a plausible explanation is that all the pre-election poll results were released to the general public, and all political
parties and their strategists had access to the results of the polls on our website and social media platforms. Consequently, I strongly reckon that the results of the two pre-election polls conducted by NOIPolls and the one by CrowdForce may have served as pro-bono consulting and used by APC strategists to re-tool their strategies and recalibrate for victory. Besides, there are theories that PDP may have become complacent, is that all the polls predicted their victory by a wide margin.

Airtel Africa’s subscriber base across 14 African countries grew 4.4% on-quarter and stood at 116.4 million with an Average...
Read more
Business & Economy

Guinness Nigeria Plc has reported a loss after tax increase of 127.2 percent at N841.64 million for the first quarter ended September 30 as...
Read more
Entertainment & Lifestyle

You Can Now Mute Chat Forever on WhatsApp

WhatsApp has released the “Always” mute feature for users. The feature is available for Android and iOS users and will allow users to mute...
Read more
Entertainment & Lifestyle

According to the research data analyzed and published by Safe Betting Sites, Japan accounted for 22% of all mobile game spending globally during the first...
Read more
Business & Economy

According to the research data analyzed and published by ComprarAcciones, the biggest lenders in the US and Europe are on course to record some...
Read more
- Advertisement -

The national youth leadership caucus of the All Progressives Party, APC in Nigeria, take this auspicious moment, to declare our support for the re-election...
Read more

National Chairman of the All Progressives Congress (APC), Comrade Adams Oshiomhole, has advised the Federal Government to stop borrowing from pension funds to finance...
Read more

Between the Poor and the Very Poor I did not vote because all politicians are thieves- Ismaila Ahmed My business is suffering and things are...
Read more

Arik Air has introduced a N16, 000 fly- to -vote promotion to encourage Nigerians to travel to their respective wards to cast their votes...
Read more
- Advertisement -