Historically, Nigeria has shown a record of reliance on imported refined and raw sugar for household consumption and industrial uses. In the last decade data from the Nigerian Sugar Development Council (NSDC) as at 2016 showed that a yearly average of c.$5.1mn was spent on sugar importation. Although we saw upspring of sugar refineries, Nigeria is still heavily reliant on the importation of raw materials. In 2008, the Nigerian Sugar Master Plan (NSMP) was birthed but was not approved until 2012. The Master Plan was designed to curb unbridled importation and facilitate local production. 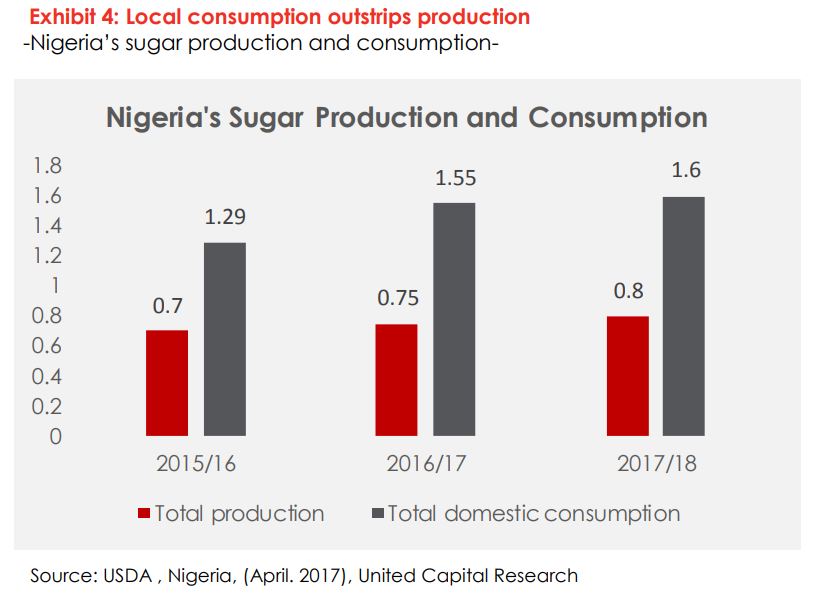 The NSMP compels private sector players to embark on backward integration programme, regulation of importation through quotas and granting of fiscal
incentives to participants. Three refineries – Dangote Sugar, Golden Sugar, and BUA Sugar – were approved for the backward integration programme and have been
benefiting from concessionary tariffs on the importation of sugar.

Nevertheless, the United States Department of Agriculture (USDA) forecasts sugar production in Nigeria to increase from 0.7MMT in 2016/17 to about 0.8MMT in
2017/18. We also expect recent improvement in government support through the CBN’s Anchor Borrowers Program (ABP) and forex stability to facilitate importation of machinery necessary to further buoy local production, hence, improving capacity utilization of integrated mills. 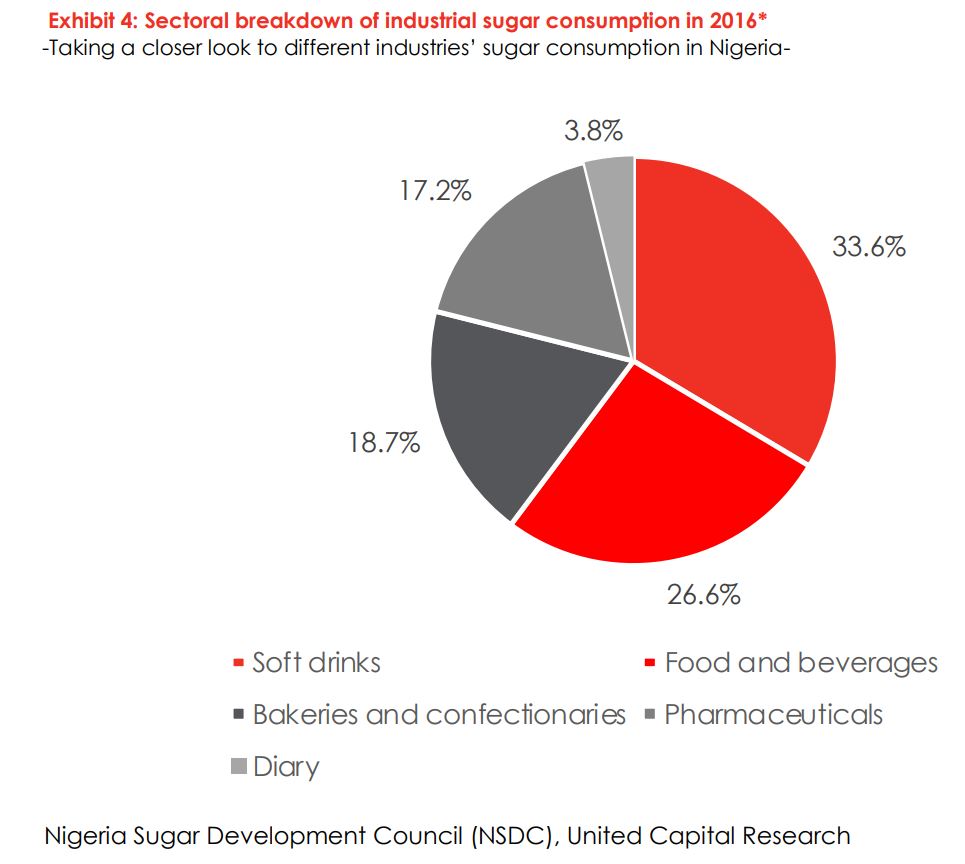 According to the Nigeria Sugar Development Council (NSDC), in 2016, the soft drinks and food & beverages sector accounted for over 60% of the total industrial
sugar consumption in the country. While bakeries & confectionaries, pharmaceuticals, and dairy sectors culminated the remaining 40%. This further buttresses our outlook for growth in the sugar industry as all subsectors that rely on the industry for inputs are well positioned in the consumer staples industry which is deemed to benefit from expanding population and growing middle-class income in the country.

The Nigerian sugar industry can be characterized as oligopolistic in nature. It is dominated by three players – Dangote Sugar Plc, Golden Sugar Ltd, and BUA Sugar
Ltd with a total refining capacity of 2.3MMT. However, the capacity utilization of players in the industry has been capped by the raw sugar importation quota
imposed by the Federal Government of Nigeria through the NSMP. The industry has gone through policy reforms over the last decade has given the Federal Government’s interest in reducing raw sugar importation and developing an integrated sugar framework for the country. However, implementation of the NSMP has been greatly hindered by structural bottlenecks, including land acquisition and the shortage of skilled manpower. Despite the challenges, the three players involved have drawn up their individual projects, tailored to the NSMP hence sustaining the goal of the Plan.

DANGSUGAR leads the sugar industry with 61.5%* market share and production capacity of 1.44mmtp/a, a feat it has been able to achieve through pioneer advantage, long-standing presence in the market, large production capacity, volume driven marketing strategy, strong distribution, and delivery network. The remaining two players in the industry, Golden Sugar Ltd, and BUA Sugar, hold 32.1% and 6.4% of the market respectively. 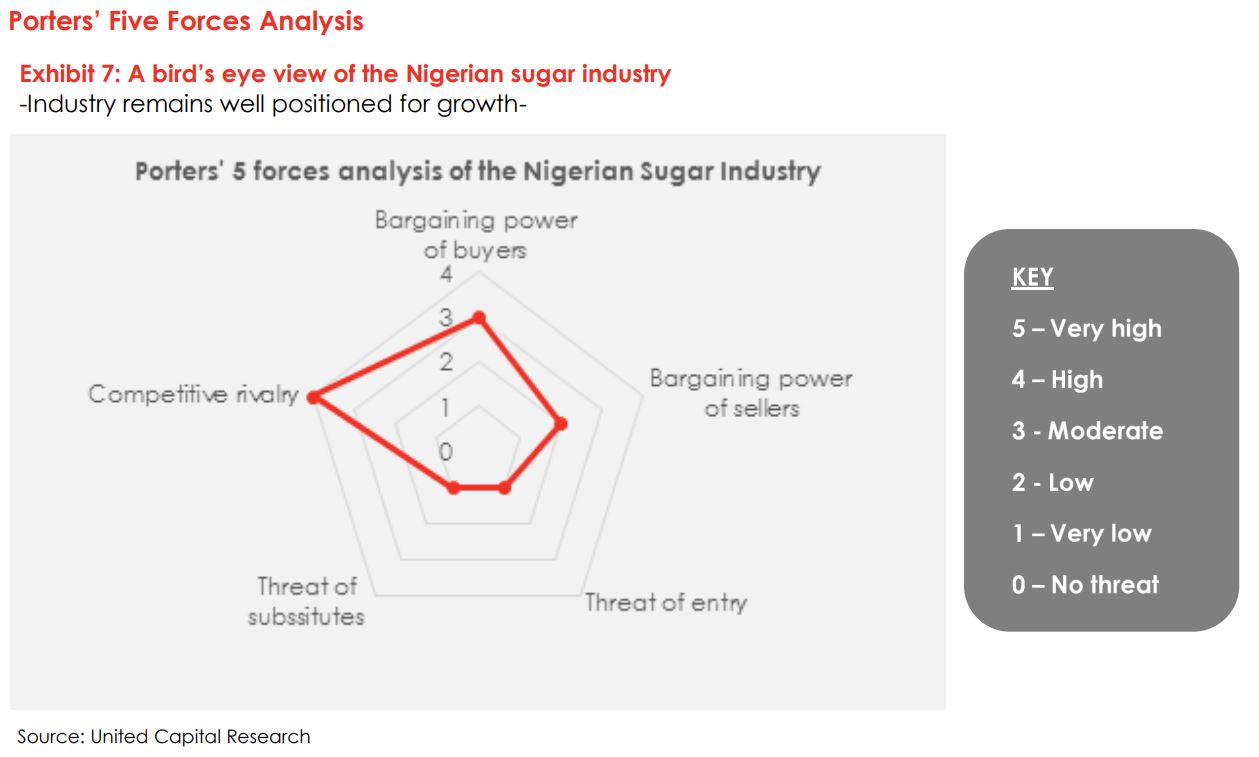 Business to Business (B2B) consumers has high bargaining power because they buy in large quantities and make a large chunk of consumers for the industry. However, this power is moderated due to high switching cost because refined sugar is essential inputs for consumers such as bakeries, confectionaries, pharmaceutical companies, and manufacturers.

Raw sugar, the major input for the industry, is imported from different sellers in Brazil and other producing countries. Also, the industry’s players import in large quantities hence giving them high bargaining power when negotiating for trades. The implementation of backward integration programme by many producers is likely to reduce reliance on importation going forward hence delimiting power of suppliers.

Due to the high capital requirement for production and large economies of scale already enjoyed by existing players, there are stringent requirements for entry. In effect, the number of players is capped.

Refined sugar, the final product of the industry does not have a clear substitute for the purpose it is used for, and even when it is available it has relative value given high switching costs for consumers.

Players in the industry produce similar final products that can be easily substituted, leading to heated rivalry amongst the players.

The relatively constrained bargaining power of buyers imply that sugar producers have control over pricing of their products; the low bargaining power of sellers
shows that the pricing power of inputs for the industry is not influenced by a single seller, low threat entry indicates sealing in margins by players while eliminating
erosion of margins by small players; low threat of substitutes shows low replaceability of the final goods and implies continuous demand. Although the competitive
rivalry seems high, the supply deficit in the industry leaves room for growth especially for firms with the large scale of production. All these culminate into the positive outlook for the industry’s growth and viability, hence the firms therein.

The outlook for Dangote sugar is hinged on its ‘Sugar for Nigeria Project’, that was embarked on in 2012, with the goal of achieving the capacity of producing
1.5million tonnes of refined sugar from locally sourced sugarcane over the span of 10 years. This was not just to enable the company to become a fully integrated sugar business but to also eliminate the high cost of imported raw material and enhance the capacity to serve local and export markets. In addition, as an offshoot of running an integrated sugar business, the company plans to source power in-house from bagasse and produce fuel ethanol, animal feeds from bagasse and bio-fertilizer from sugar mud-cakes. As at FY-2017, a sum of N101bn had been spent on the project, and media sources suggest that c. $4.6bn will be ploughed further into the business by the parent company.

The following is an excerpt from United Capital report, titled Dangote Sugar Refinery Plc: Is the sugar getting sweeter?

HONG KONG, CHINA - Media OutReach - 29 October 2020 - The unprecedented COVID-19 pandemic has posed severe challenges for the global economy and supply chains have been in the eye of...
Read more
MEDIA OUTREACH

Fan Milk Plc, the Nigerian subsidiary of multinational food-products corporation Danone, has partnered with the government of Ogun state to undertake a backward integration...
Read more

BUA Group has donated an additional sum of N350million to CACOVID (the Central Bank of Nigeria-led private-sector coalition on Covid-19) bringing to N1.35billion, its...
Read more

Nigeria's leading foods and manufacturing conglomerate, BUA has today sealed an agreement with Milleral of Turkey to build its newest flour milling plants in...
Read more