The FGN’s external debt obligations at end-September amounted to US$21.59bn, equivalent to 5.8% of 2017 GDP. This includes the external borrowings of the state governments, which are mandatorily guaranteed by the FGN. The debt stock declined by US$490m q/q due to the redemption of a US$500m Eurobond, Nigeria’s first, in July.

The DMO’s report for Q4 2018 will reflect the Eurobond sales in November to raise US$2.8bn. Debt due to international capital markets (ICM) will then regain top spot among creditor groups. 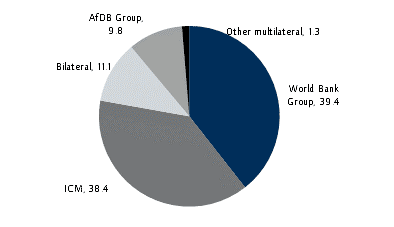 "When will this economic paralysis come to an end? I am in pain" "I will rather die from Coronavirus than...
Read more
Business & Economy

Learn about which sports can yield more returns when betting with Nigerian online bookmakers. Make every bet count. The Most Profitable Sports...
Read more
News

This is to bring to the notice of the public that the Debt Management Office (DMO), on behalf of the Federal Government of Nigeria (FGN),...
Read more

Rising debt: A further cause for concern?

Nigeria has run budget deficits for decades, which have been primarily financed by new borrowings, Coupled with subnational borrowings has led to a growth...
Read more

Nigeria’s total debt grew by almost 17 percent in one year as at September 2019 to stand at N26.2 trillion, the Debt Management Office (DMO) has...
Read more

This is to bring to the notice of the public that the Debt Management Office (DMO), on behalf of the Federal Government of Nigeria (FGN),...
Read more
- Advertisement -