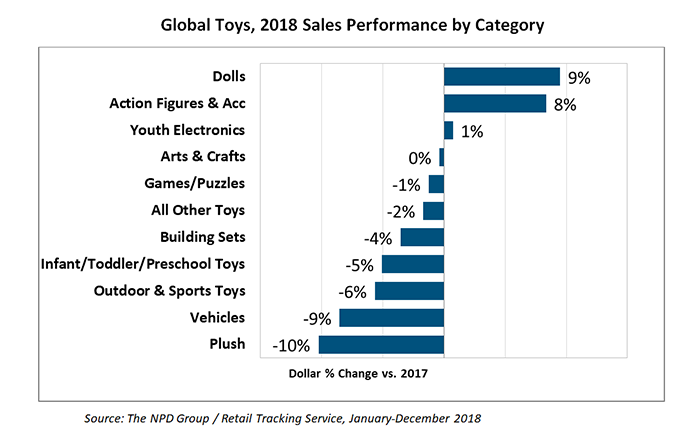 Dolls, Action Figures & Accessories, and Youth Electronics experienced respective growth of 9 percent, 8 percent, and 1 percent, while sales of Arts & Crafts were flat. Of the remaining supercategories tracked by NPD, Plush and Vehicles saw the largest declines.

“Several factors added up to a smaller share of wallet for traditional toys in 2018, including a shrinking retail footprint and the increasing demand for video games,” said Frédérique Tutt, Global Toys Industry Analyst at The NPD Group.  “While it isn’t business as usual for toys, 2019 sounds promising thanks to a wide range of kid-friendly movies, which often helps to drive toys sales, as well as old, favourite toy brands that are either celebrating milestone birthdays or attempting to make a comeback.”

Looking at the top five selling toy properties across the G13 in 2018, L.O.L. Surprise! was the largest property overall, holding the first position in six out of 13 global markets followed by Barbie, Marvel Universe, Nerf, and Star Wars.

“In 2018, many manufacturers demonstrated their resilience in what could easily be described as a tumultuous market, with two rising to the top to win NPD’s annual awards for excellence in sales,” continued Tutt. “The winners of 2018’s Global (G13) Toy Industry Awards are Mattel for the #1 Manufacturer, as well as MGA Entertainment for #1 Property, L.O.L. Surprise!, and for the #1 Selling Toy, L.O.L. Surprise! Doll Assortment.”