A major issue of economic importance that attracted our attention this week is the news about the federal government decision to increase the current Value Added Tax (VAT 5%) to a range of 6.25 – 7.5% before the end of the year, alongside Company Income Tax (CIT) and Petroleum Profit Tax (PPT) to fund the estimated increase in government wage bills due to the increase in minimum wage to ₦30,000.

To us, this development is coming not as a surprise as we have hinted in our earlier report on January 26, 2019, that the increased financial burden associated with the implementation of the new national minimum wage will cripple many states if their IGR and FAAC allocation do not increase significantly. Apparently, the government cannot significantly influence its crude oil proceeds (a major component of FAAC allocation) but can influence its tax earnings to a large extent both at state and federal level. Hence, we resolve then that tax revenue may likely be stimulated if the new minimum wage will be successfully implemented. 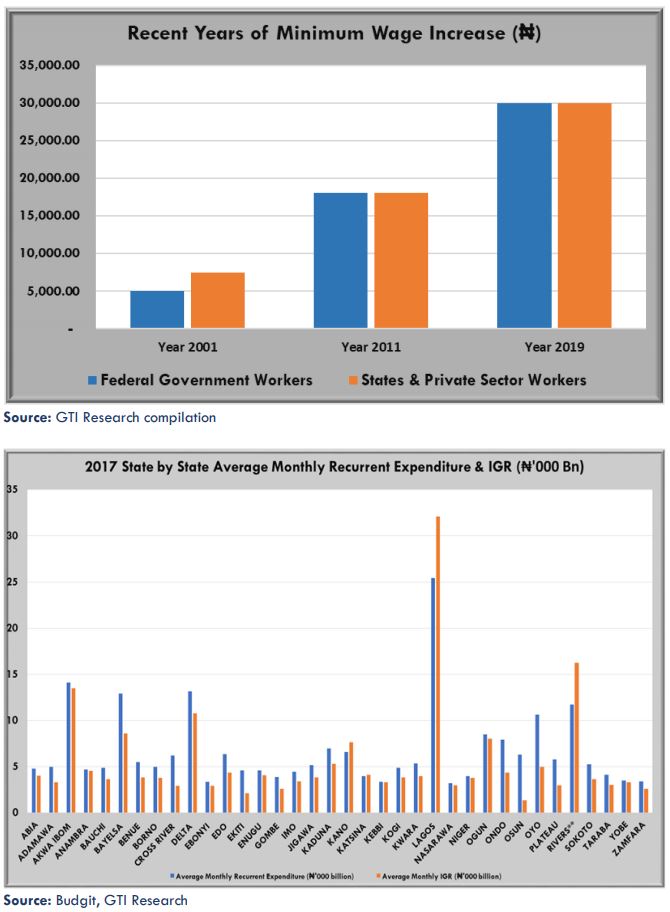 Our position then was based on an analysis which shows that 31 out of the 36 states as at 2017 cannot fund their monthly recurrent expenditure (of which labour wage is the majority) successfully from IGR without FAAC allocation. Bearing this in mind, we then recommend that of the four major ways through which the new wage regime can be sustainably managed – taking more domestic or foreign loans, downsizing of labour force, removal of fuel subsidy payment to free up capital and increased tax revenue; government should consider exploring the non-debt options of increasing tax revenue and/ removing subsidy payment. 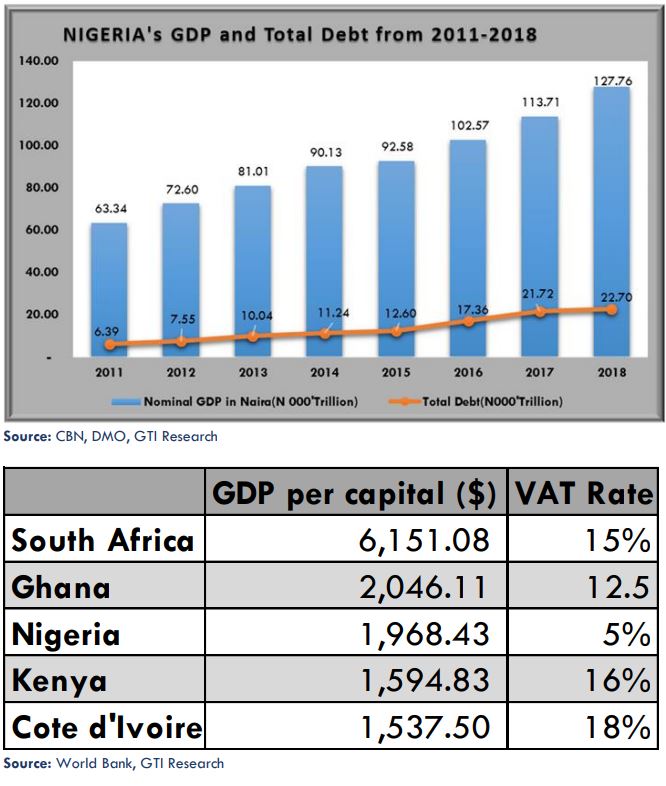 Why we think tax increase and/subsidy removal is less detrimental

Although we are quite aware of the numerous potential downsides associated with each of the four options that can be considered to fund the increase in the government wage bill, our position in support of increasing taxation and/subsidy removal as against borrowing/downsizing is predicated on two reasons.

First, Nigeria’s current debt profile (FG and State) at ₦22.70 trillion is significantly high that the government cannot afford to go on a borrowing spree to fund recurrent spending. According to data compiled from the Central Bank of Nigeria (CBN) and Debt Management Office (DMO) from 2011 when the last national minimum wage was reviewed, Nigeria’s nominal GDP grew at an average rate of 10.6% annually from ₦63.34 trillion to ₦127.76 trillion in 2018, while debt profile grew faster at an average rate of 20.4% due to increased borrowings; many of which was channelled to recurrent expenditure. Hence, our view that taking more loans to fund the increased wage bill (a recurrent expenditure) will bloat the proportion of the national budget that goes into debt servicing annually.

Secondly, any attempt by the FG, states or private sector operators to downsize their the labour force will have a far worse ripple effect on the economy given the current high unemployment rate of 23.1% (20.9 million people) and the estimated 87 million people currently living in extreme poverty in Nigeria (World Poverty Clock).

On the other hand, increasing VAT will impact the cost structure of producers, and this is expected to be passed down to final consumers in form of higher cost of goods and services (high inflation at sight). However, we believe this will have a less detrimental effect on the citizenry compared to the option of mass downsizing of labour and borrowing. To a large extent, the removal of fuel subsidy will have nearly the same impact on the economy just as the proposed VAT increase.

Thus, with Nigeria’s current VAT rate (5%) relatively lower compared to Sub-Saharan peers of South Africa (15%), Cote d’ Ivory (18%), Kenya (16%) and Ghana (12.5%), we believe the impact of the VAT increase will be less disturbing relative to downsizing of labour and debt option. However, we recommend that government should fast track its effort at improving key infrastructure (such as road and electricity) and business environment to mitigate the over bearing effect of the VAT increase when implemented.

Remote working and distance learning amid the coronavirus outbreak continue increasing global demand for PCs and laptops. After a sharp fall in the first...
Read more
Brand News

As countries grapple with the realities of the new normal, MTN Nigeria has initiated a call for entries for its mPulse hackathon, themed “Beyond...
Read more
Entertainment & Lifestyle

The United States casino industry remains on a loss-making streak in the wake of the coronavirus pandemic. The economic uncertainty continues to cast doubts...
Read more
- Advertisement -

The Federation Accounts Allocation Committee (FAAC) was, on Wednesday, reported to have shared N676.407 billion as federation allocation for the month of July 2020. A...
Read more
- Advertisement -