Dangote Sugar Refinery has announced a profit before tax of N34.6 billion for the financial year ended December 31, 2018. 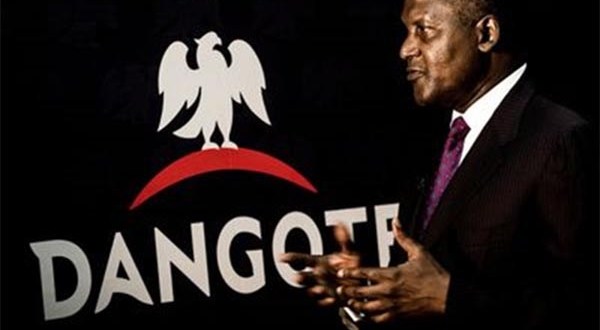 A breakdown of the result released on the floor of the Nigerian Stock Exchange (NSE) indicated that while gross profit stood at N39.7 billion, the refinery earned revenue of N150.4 billion.

Ravindra Singhvi, the Chief Operating Officer, Dangote Sugar Refinery, speaking on the results said: “Though we maintained our market leadership position in the sugar sector, year 2018 was very challenging due to the impact of unlicensed sugar, smuggled and sold in our key markets nationwide, and the logistics challenges brought about by the continued Apapa traffic gridlock.

“The gridlock constrained availability of trucks required daily to evacuate the production volumes, while the influx of smuggled sugar exerted a downward pressure on selling prices.

“Despite efforts being deployed by the regulators to stem the tide, the influx of smuggled sugar into the markets spread further across our key markets in the North East and North West. We are currently focusing on process optimization and the realization of our Sugar Backward Integration Projects targeted at the production of 1.08 million metric tonnes of sugar in 6 years; from our various projects across the country.”

Read Also:  Dangote Group reveals how it is business influences lives ahead of Wealth Creation
- Advertisement -

Its subsidiary, Savannah Sugar Company Limited, factory located at Numan, in Adamawa State, is an integrated sugar production facility, with an installed factory capacity of 50,000 tonnes. Covering 32,000 hectares, the Savannah estate has considerable opportunity for expansion which is underway as part of the Dangote Sugar for Nigeria Project, campaign.

“Our Backward Integration goal is to become a global force in sugar production, by producing 1.5M MT/PA of refined sugar from locally grown sugar cane for the domestic and export markets” in 10 years, he added.

During the year, the following companies which form part of the Backward Integration Project (BIP) were incorporated and consolidated in the Financial Statements of the group, which is indicative of the progress being made in BIP.

- Advertisement -
Read Also:  Dangote Group reveals how it is business influences lives ahead of Wealth Creation

The Board has recommended a dividend payout of N1.10 kobo per ordinary share of 50 to be paid to shareholders for the year ended December 31, 2018. This is subject to shareholders’ approval at the 13th Annual General Meeting of the Company.

TAIPEI, TAIWAN - Media OutReach - 27 October 2020 - Taiwan not only invented bubble tea that has created a global phenomenon, one of...
Read more
MEDIA OUTREACH

We expect Dangote Sugar to maintain its Revenue growth momentum in the third quarter and forecast a 23.7% y/y jump in 9M’20 topline to...
Read more

Additional shares of Dangote Sugar Refinery Plc have been listed on the trading platform of the Nigerian Stock Exchange (NSE). This was disclosed on the...
Read more

Just as it is turning around the fortunes of its teeming consumers by making them millionaires through its on-going spell and win promo, Dangote...
Read more
- Advertisement -