The Director of Inspectorate and Compliance Directorate of the organisation, Mr Obiora Manafa, who disclosed this in Enugu, said that the tyres did not meet the quality specifications of SON. 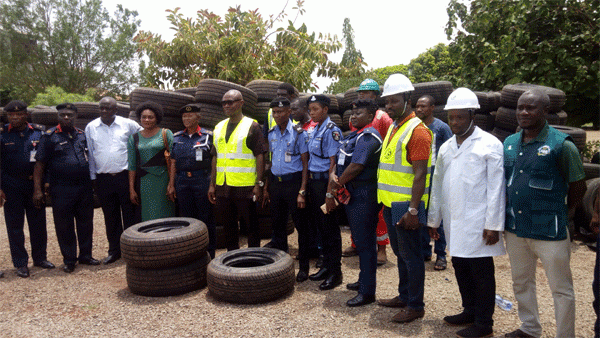 Manafa said that the goods which were imported from China were intercepted by a sister organisation in Port Harcourt and handed over to SON.

He said that on taking delivery of the tyres based on sizes and grades, SON officials discovered that the importer rendered the tyres substandard as he stuffed the goods.

According to him, the goods lack acceptable quality as specified by the organisation.

“A check on the date of production of the tyres revealed that they were produced in the 17th week of 2018, which was within the acceptable life span of the tyres.

“But the tyres were seized because the importer stuffed them,’’ Manafa said.

According to him, stuffing is the practice of squeezing a tyre with mechanical force with a view to ramming them together.

He said that this practice enabled importers to squeeze up to six tyres into one, thereby causing damages on the goods.

“The whole essence of this is for the importer to deceive government by not paying the required duties. There is nothing wrong with the tyres as manufactured but the act of stuffing destroyed them.

“You make the tyres substandard and cause damages and expansion by stuffing them.

“Such tyres pose brake danger on vehicles and we cannot allow them to enter the market,” he said.

Manafa condemned the activities of importers who would want to make profits at the detriment of Nigerians.

He appealed to importers to do the right thing by observing standards, adding that SON would never compromise on its mandates.

He also advised motorists not to patronise such tyres, describing them as life-threatening.

The Enugu State Commandant, Nigeria Security and Civil Defense Corps (NSCDC), Mrs Chinwe Kannu, who witnessed the destruction of the tyres said that such action was commendable.

“I feel sad about this but as a patriotic Nigerian, I am happy because we are getting rid of substandard goods,” Kannu said.

No fewer than 5,483 people died in road accidents in Nigeria in 2019, according to the National Bureau of...
Read more
Business & Economy

Learn about which sports can yield more returns when betting with Nigerian online bookmakers. Make every bet count. The Most Profitable Sports...
Read more
- Advertisement -

Zinox Gets Another Feather In Its Cap, Bags Coveted SON Certificate

The Standards Organisation of Nigeria (SON) has upgraded its online application portal for the operation of the offshore Conformity Assessment Program (SONCAP) for processing...
Read more

The Standards Organisation of Nigeria (SON) and stakeholders in the food industry have collaborated to develop new standards that would improve the production processes...
Read more

In furtherance of the invasion on the sale and manufacture of inferior roofing sheets in the country, Standards Organisation of Nigeria (SON) had seized...
Read more
- Advertisement -