In what has been described as another feather to the hats of the Akeredolu’ administration, the Joint Tax Board (JTB) has rated Ondo State as the highest growth performing state in the internally generated revenue [IGR] from the 2017/2018 Comparative IGR performance and percentage growth. 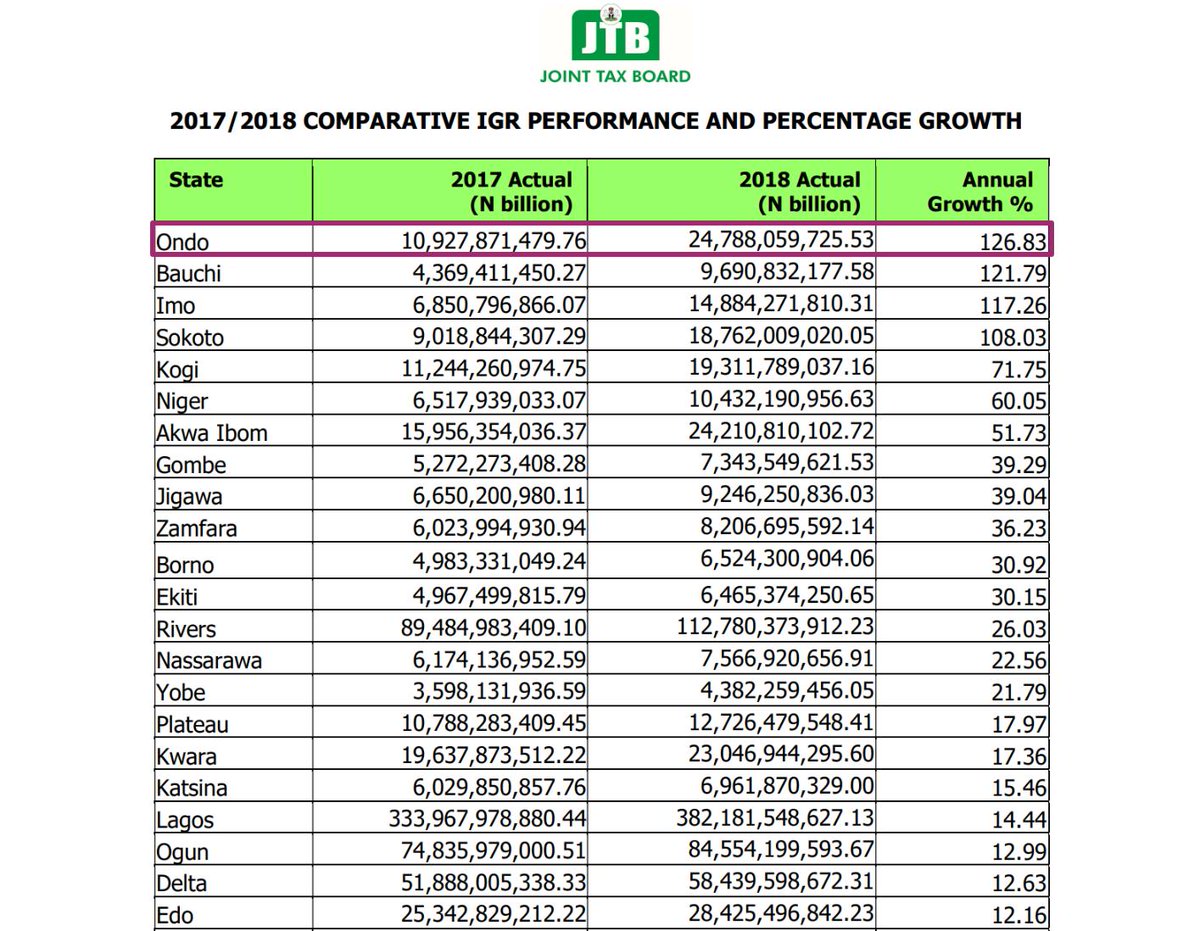 It was also noted that Bauchi, Imo, Sokoto, Kogi, Niger, and Akwa Ibom emerged top 7 earners of Self-Assessment tax across the country.

This information was made available to the public yesterday following the release of the 2017/2018 Comparative IGR performance and percentage growth by the joint tax board.

The Joint Tax Board is the umbrella body of all the tax authorities in Nigeria, which is saddled with the responsibility of promoting and ensuring uniformity, harmony and efficiency in the administration of Personal Income Tax in Nigeria as well as advising the government on general tax matters.

Coming top among its counterpart in the federation, the rating is a confirmation of the state government efforts over the past two years which were aimed at charging all the revenue generating Ministries, Departments and Agencies (MDAs) to improve on their revenue generation as a way of building a strong economic base in the state.

The state of Board of Internal Revenue (BIR) has proven to be effective with its plans, which has successfully brought major stakeholders in revenue generation together to review, highlight and proffer solutions to challenges militating against optimum performance.

Upon the assumption into office as the executive Governor of Ondo State, Arakunrin Akeredolu reiterated his commitment to mapping out various strategies that are in line with the global best practices on revenue generation, and this rating is a testament of the effort of the Akeredolu led administration at improving the fortunes of Ondo state.

SINGAPORE - Media OutReach - 8 July 2020 - There is no need to wait for your next flight to purchase tax and duty-absorbed alcohol from Singapore Changi Airport! Non-travellers can...
Read more
MEDIA OUTREACH

We’ve Sacrificed Our IGR To Prevent Job Loss’ – Sanwo-Olu Lagos State Government has set the process of re-opening its economy in motion, with the...
Read more

The National Bureau of Statistics Published Internally Generated Revenue (IGR) at State level for Fourth Quarter and Full Year 2019. The NBS, in a report...
Read more

A federal high court sitting in Abuja has vacated a ruling that barred the Nigeria Investment Promotion Council (NIPC) from spending its internally generated...
Read more

The National Bureau of Statistics on Thursday released the Internally Generated Revenue figures for states for the third quarter of this year with the...
Read more
- Advertisement -