World Malaria Day is commemorated on April 25th each year. This annual event is a worldwide effort which is aimed at raising awareness for malaria and funds for the treatment and prevention of malaria. The day also highlights the need for better political intervention in malaria control and prevention as well as marking the continuation of great achievements in the fight against malaria worldwide. The theme for the 2019 World Malaria Day is “End Malaria for Good” and the day is hosted by the World Health Organization (WHO).

According to the most recent World Malaria Report 2018, the global tally of malaria reached 435,000 malaria deaths and an estimated 219 million new cases in 2017. Therefore, WHO is calling on malaria-affected countries, partners and donors to boost investments and efforts to reduce the disease burden through coordinated efforts. This will help to strengthen national capacities and ownership as well as funding for scaling up preventive interventions to ensure universal coverage of all at-risk populations.

Maintaining a healthy populace is crucial in contributing to the gross domestic product (GDP). Unfortunately, Nigeria bears the burden of debilitating diseases like malaria, polio, HIV/AIDS, typhoid, etc. For example, Nigeria suffers the world’s greatest malaria burden with approximately 51 million cases and over 200,000 deaths reported annually. With about a third of the population getting ill from malaria only in the span of 12 months, the negative impact this has on productivity and development cannot be taken for granted.

In commemoration of the World Malaria Day, NOIPolls presents excerpts from its National Survey which was conducted in 2017. The National Survey assessed the opinions of Nigerians on their health status and the most prevalent health challenge facing Nigerians. The survey revealed Malaria as the most prevalent health challenge facing Nigerians by a significant proportion of 81 per cent. The findings also showed that as many as 69 percent of the population had been diagnosed with malaria at least once (or more) in the past 12 months; with 63 percent accessing malaria tablets, 30 percent taking injections, and 6 percent making use of native medicine to treat the ailment.

The chart below showed that Malaria accounts for 81 percent of all visits to healthcare providers. Remotely next to malaria are cough (4percent), cholera (3percent) and diarrhea (2percent) respectively. 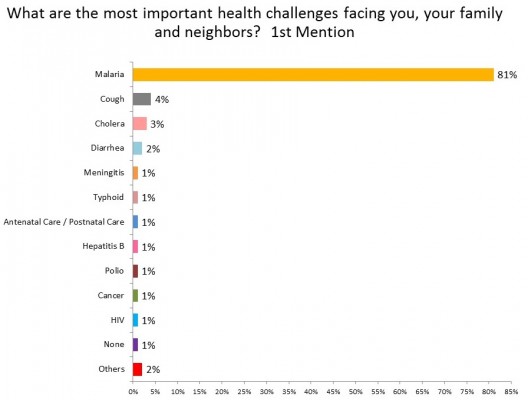 The preponderance of malaria as illustrated in the figure above warrants further probing. Malaria is the leading cause of death in Nigeria with over 300,000 deaths per year which is more than other deadly diseases such as HIV/AIDS. Over the past 12 months, only 31 percent of respondents reported being free from malaria diagnosis; 48 percent reported one or two episodes, while 16 percent reported three or more episodes. Compared to male respondents, female respondents reported higher rates of malaria diagnosis during the period based on lower percentages reporting no episode (female – 28 percent; male – 34 percent) and higher percentage reporting one or two episodes (female – 52 percent; male – 45 percent). Malaria diagnosis also decreases by age, with malaria-free proportion rising from 29 percent (age 18-35) to 32 percent (age 36-60) and 34 percent (above 60), and the proportion that experienced one or two episodes decreased from 49 percent (age 18-35), 48 percent (age 36-60) to 40 percent (above 60 years). However, the percentage experiencing three or more episodes decreased from 16 percent (age 18-35) to 14 percent (age 36-60) but increased significantly to 21 percent (above 60 years). 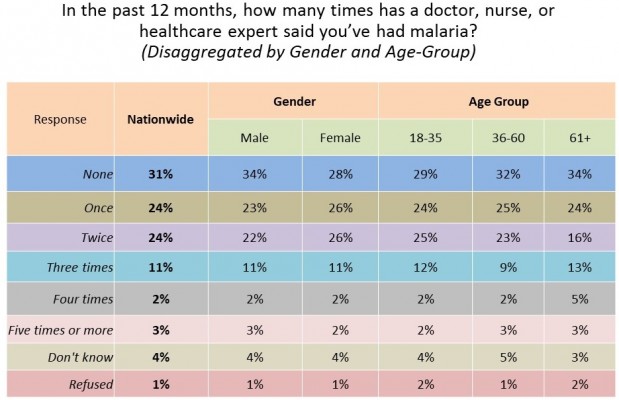 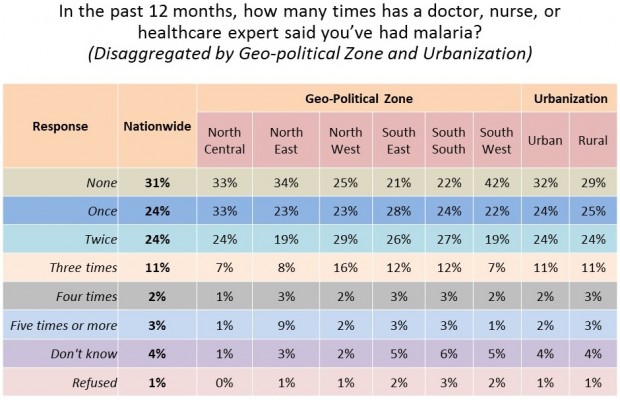 On average, 93 percent of malaria episodes are treated with modern medicine (63 percent with tablets and 30 percent with injections). Of the remainder, 6 percent are treated with native treatment while the remaining 1 percent cases are untreated. There is no significant difference by gender in the propensity to use modern medicine (male – 92 percent; female – 93 percent), neither are there significant differences by age (age 18-35 – 93 percent; age 36-60 – 92 percent; above 60 – 92 percent). 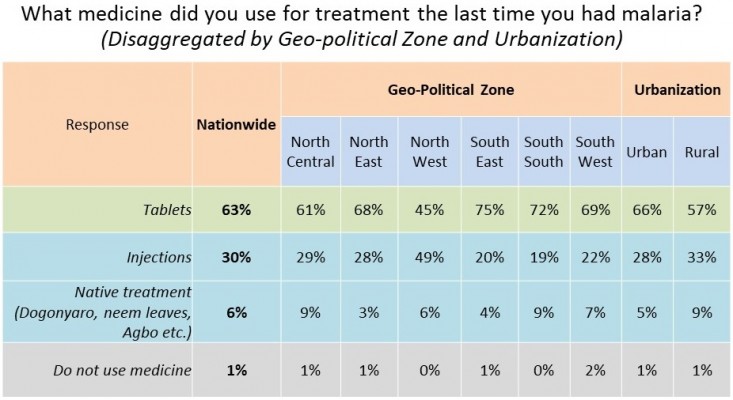 In conclusion, the survey revealed an urgent need for interventions in the Nigerian health system to reduce the incidence of malaria as the burden of malaria remains quite high in the population. This raises concerns regarding the effectiveness of malaria interventions and suggests the need for more to be done in its prevention; as it is being advocated by the WHO considering the commemoration of World Malaria Day coming up on the 25th of April, 2019.

81 percent of respondents reported malaria as the most important health challenge they face while 31 percent had no cases of malaria. This is a classic example of self-diagnosis without seeking laboratory confirmation. This is worrisome because most haemorrhagic illnesses such as Lassa Fever and Ebola mimic symptoms of malaria. Therefore, communities may be at risk of infectious diseases when individuals think they have malaria without laboratory diagnosis. Clients at hospitals are advised to always request for laboratory tests to confirm malaria even when health workers want to treat without testing. The Rapid Diagnostic Test (RDT) helps in this regard.

Finally, even though concerted efforts have been made towards the control of malaria, its elimination has continued to be a mirage. However, the future still holds considerable promise with new dimensions being explored which include increased research funding especially towards vaccine development, policy formulation and implementation based on evidence, increased public health and environmental education, incorporation of the communities in activities towards malaria control as well as stepping up of ongoing control programmes and possibly integrating them into primary health care activities. Malaria control in Nigeria and indeed other endemic countries will cease to be a mirage and become a reality with a little more strategic and prioritized effort.

NIKE RETAINS #1 IN AFRICA FOR THIRD YEAR IN A ROW AFRICAN BRANDS DROP BY OVER 60% IN 10 YEARS DANGOTE AND MTN...
Read more
Entertainment & Lifestyle

Keanu Reeves First on the list is Keanu Reeves where Neo (The Matrix) and Babayega (The Boogeyman) comes to mind. You better don't mess with...
Read more
News

The number of pregnant women and children in sub-Saharan Africa sleeping under insecticide-treated bed nets and benefiting from preventive medicine for malaria has increased...
Read more

Each year, it is estimated that about 300,000 Nigerians die of malaria-related illnesses with urgent action required to address its prevalence. Globally, World Malaria...
Read more

Mouka Limited, Nigeria’s leading manufacturer of mattresses and other bedding products, has launched an innovative range of insect repellents in line with its mission...
Read more
- Advertisement -