Second term for Emefiele: More of the same

Not since the tenure of Abdulkadir Ahmed who served from June 1982 to September 1993 has a Governor of the Central Bank of Nigeria (CBN) been reappointed for a second term. Following the nod by President Buhari, Godwin Emefiele, who was first appointed in 2014 by President Goodluck Jonathan, is on the way to securing his second term. It is unclear if his reappointment is because his boss believes he has put in a really good shift or whether he is just lucky that President Buhari is simply averse to changing people he has a working relationship with. Regardless Mr Emefiele’s reappointment should give investors, who generally hate uncertainty, some comfort because he is a known quantity.

Before assuming office as CBN Governor, Emefiele was the group managing director of Zenith Bank. Setting a tone for his focus on foreign exchange (FX) market stability, the CBN in June 2015 excluded importers of 41 goods and services (this has since been increased to 43) from accessing FX at the Nigerian foreign exchange markets in order to ensure the efficient utilisation and encourage local production.

By Q2 2016, the country had slipped into a recession (contracting 1.51% that year) on the back of plunging oil revenues and a faltering currency. As prices tumbled, the Nigerian government imposed a fixed exchange rate to check the outflow of funds but this led to overvaluation of the Naira and foreign investors took flight. After initially resisting calls to devalue the Naira, the CBN was worked into a hemmed in policy position and it finally gave in and “floated” the currency in June 2016. However, the damage had been done.

After suffering contraction for five consecutive quarters, the Nigerian economy officially exited the recession in Q2, 2017 on the back of rising oil prices and inflation has since dropped to the 11% range. Since then, the economy has failed to reach pre-recession growth rates, with growth lagging behind population growth and unemployment at record highs.

To Emefiele’s credit, the CBN under his watch has achieved some level of success in securing foreign exchange (FX) market stability. The Investors and Exporters Foreign Exchange Window was established in April 2017 with the operating modality of a willing buyer, willing seller basis – the “market” that many commentators had been arguing for to the chagrin of the CBN. Two years after inception, FX inflows through the window have exceeded $50 billion, while FX reserves have risen above $43 billion from the $25 billion levels they were at when it was established (of course with the good fortune of improved oil prices over the period). 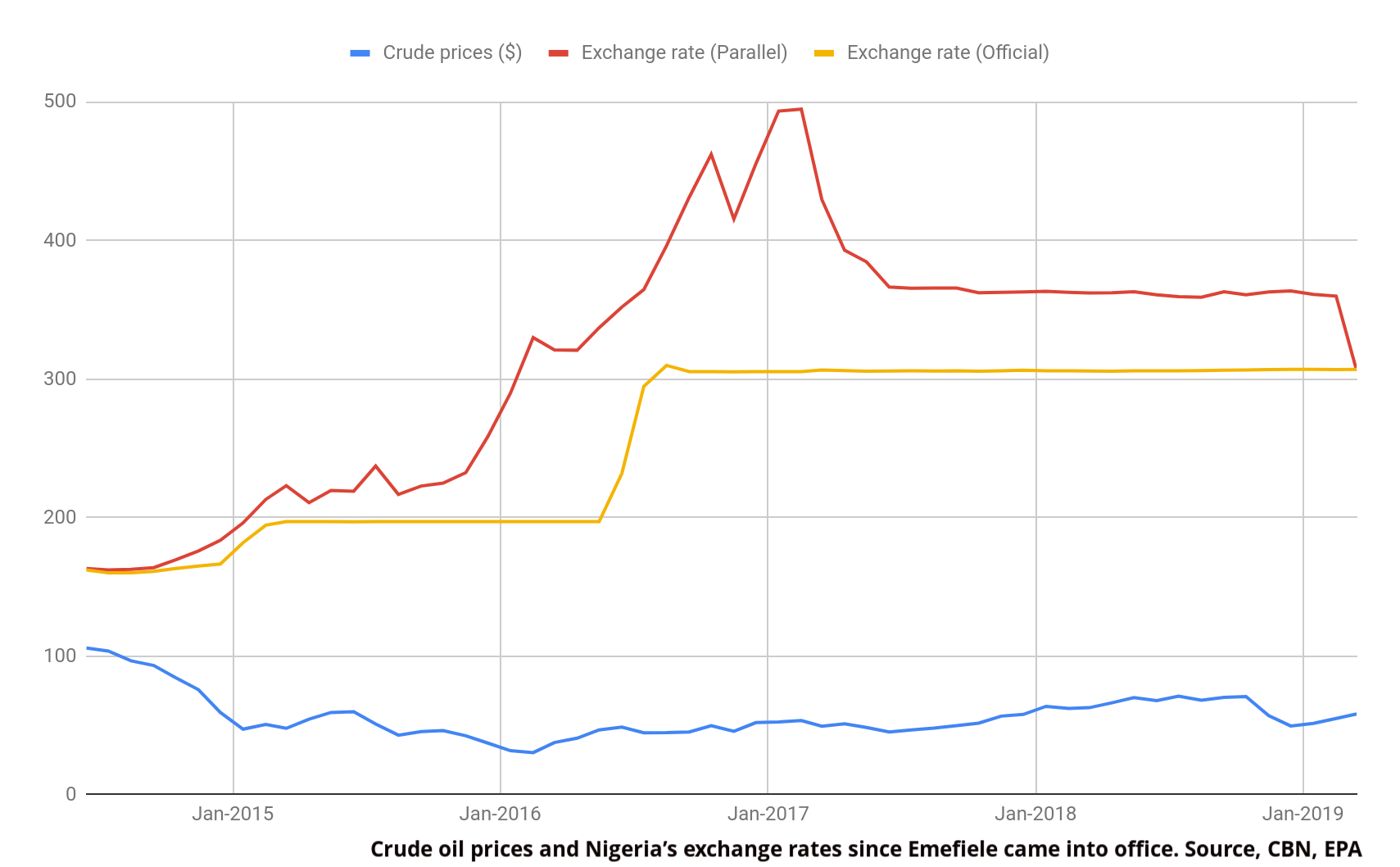 Whilst the gap in various exchange rates have tightened (at a point Nigeria had at least five different exchange rates) a critical next step must be to unify the multiple exchange system which does not encourage investors and encourages arbitrage which leads to large scale corruption. Note that under Emefiele, the MPC had become toothless as the CBN has not implemented its decisions. For example, the MPC announced MPR at 14% and held that rate for a long time, but the CBN tightened, then eased, then tightened, then eased as evidenced by its OMO bills.

With regards to FX restrictions, the impact has been at best mixed. The government has announced that importation bills on wheat, milk, rice, tomato and sugar have reduced by over 50% in the last five years, as the local production of these products has climbed following targeted interventions such as the disbursement of over ₦160 billion to 850,000 smallholder farmers under the CBN Anchors’ Borrowers Scheme since November 2017.

On the flip side, there are indications that the imports simply left the formal sector and ballooned the informal smuggling sector. Official records show that imports of rice, for example, dropped from 1.24 million MT in 2014 to an all-time low of 23,197MT in 2017. However, according to data from the Thai Rice Exporters Association, rice imports from Thailand to Benin, Nigeria’s tiny neighbour to the west, rose from 805,765 MT in 2015, to 1.81million MT in 2017, while exports from Thailand to Cameroon, Nigeria’s eastern neighbour, rose from 449,297 MT in 2015 to 749,008 MT in 2017. Considering that in the entire West African region, Nigerians eat the parboiled rice produced by Thailand in the greatest volumes, and with a population of 180 million people as compared to Benin’s 10.9 million and Cameroon’s 23.4 million, guessing that Nigeria is the final destination of the imports is not far-fetched.

Another sticky issue has been that of subsidies. It was recently reported that Nigeria may have spent up to ₦10 trillion in subsidising imported petrol from 2006 to 2018. Added to this is that power distribution companies have experienced a monetary shortfall of over ₦1.4 trillion over the past couple of years because they either cannot charge consumers the required fees to at least break even, or collect fees due to the absence of accurate meter reading. As a member of the president’s economic management team, it is the duty of Mr Emefiele to advise the President on doing the right things rather than engaging with his colleagues in the game of musical chairs.

It is important to note that the CBN did ask banks to forgo the interest charged on petrol subsidy-induced loans advanced to oil marketers from June 2017 to December 2018, thus passing the burden to the banks, and ultimately their shareholders; a move that amounts to a dereliction of responsibilities by a government which previously maintained that there were no petrol subsidies.

There is also the issue the CBN funding the government massively beyond the provisions of the Fiscal Responsibility Act. While this provided a means for the Federal Government to meet its financing needs, it circumvented the framework set out to engender financial stability and responsibility.

At the twilight of his current term, Mr. Emefiele surprised investors by convincing the Monetary Policy Committee (MPC) which he chairs to cut the Monetary Policy Rate (MPR) by 50 basis points to 13.5 per cent after keeping the benchmark unchanged for 33 months since June 2016. This signalled a shift in the Central Bank’s focus to growth, years after the former finance minister, Kemi Adeosun repeatedly pleaded with the CBN to cut interest rates and press banks to increase leading.

In the final analysis, we believe that the decision to retain Mr. Emefiele is an indication that the Buhari administration will continue with the current fiscal and monetary policy frameworks that have subsisted for the first tenure of the administration. The implication being that as the government’s debt service volumes and costs balloon beyond the reaches of the Fiscal Responsibility thus limiting external borrowing, it will lean more on CBN for debt financing. Consequently, in the event that Nigeria experiences similar shocks in oil prices as it did in 2015, we can expect that policy reactions will be similar to 2016.

The attention of the Central Bank of Nigeria (CBN) has again been drawn to fraudulent messages and videos in social media circles requesting unsuspecting...
Read more

Pre-MPC Analysis: What choice is best for the CBN at this moment?

Next week, precisely Monday 21st and Tuesday 22nd September 2020, all the eleven members of the CBN Monetary Policy Committee (MPC) are expected to...
Read more

The Central Bank of Nigeria (CBN) has granted Greenwich Trust Limited a Licence to operate as a Merchant Bank in the Country. The entity...
Read more
- Advertisement -