Pension Industry In Need Of New Members; Asset Under Management Increased By 14.4% in Feb 2019

The comparable regulator in Kenya, the Retirement Benefits Authority, has put AUM at end-2018 at KES1.17trn (US$11.4bn), equivalent to 15.0% of the most recent nominal GDP figure available. Nigeria was relatively late (2004) in the establishment of its regulated industry.

The Nigerian industry’s holdings of FGN paper amounted to 73.1% of their AUM in February, compared with 70.7% one year earlier.

The role of the PFAs in naira debt markets remains a core element of any assessment of direction. Their holdings of FGN bonds at end-February represented 48.1% of the stock of the instruments at end-year.

In the far smaller sukuk market, the PFAs held 47.9% of the Islamic bonds in issuance.

The share of AUM invested in domestic equities has declined over 12 months from 9.4% to 6.8%. By way of explanation, we note that the NSEASI fell by 26.8% over the same period.

The latest PenCom data show a total of 8.57 million scheme memberships, implying an average portfolio of N1.04m (a marginal increase on the month). 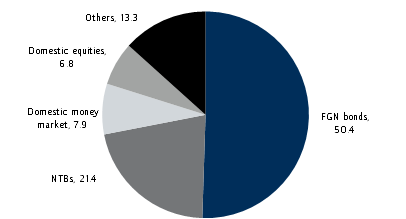 This average should decline now that the PFAs are able to market micro pensions for the self-employed and employees of small firms. In January the regulator suggested an increase in AUM over an unspecified timeframe of N3trn, and an additional 12 million contributors over five years.

In the just concluded week, the National Pensions Commission (PenCom) announced its plans to commence the implementation of the Retirement Savings Account (RSA) transfer...
Read more

AIICO Insurance Plc hereby notifies the Nigerian Stock Exchange that AIICO has entered into discussions with FCMB Pensions Limited, for the sale of 70%...
Read more

National Chairman of the All Progressives Congress (APC), Comrade Adams Oshiomhole, has advised the Federal Government to stop borrowing from pension funds to finance...
Read more

Only RSA Holders Who Have Completed Data Recapture Exercise Can Withdraw From Their Retirement Savings Account, These are the Documents Required.