NOIPolls joins the world in commemoration World No Tobacco Day (WNTD) which is observed annually on the 31st of May. The annual campaign seeks to inform and sensitize people on the deadly and destructive effects of tobacco use and second-hand smoke exposure as well as to discourage the use of tobacco in any form. The theme for the 2019 World No Tobacco Day is “Tobacco and lung health”.

The aim of this year’s theme is to increase awareness amongst other things; on the effect of tobacco consumption on people’s health which range from cancer to chronic respiratory disease, the pivotal role lungs play in the overall health and well-being of people and the inter-relationship between tobacco smoking and tuberculosis death. For instance, according to the World Health Organization (WHO), the tobacco epidemic is one of the biggest public health threats the world has ever faced as it kills more than 7 million people annually. Sadly, more than 6 million of those deaths are the result of direct tobacco use while around 890 000 are the result of non-smokers being exposed to second-hand smoke.

Nigeria is not exempted from this public health threat as it is estimated that more than 16,100 Nigerians die annually from tobacco-related diseases, while over 25,000 children (10 – 14 years) and more than 7.4 million adults continue to use tobacco each day. In commemoration of the World No Tobacco Day (WNTD), NOIPolls presents findings from its past poll on tobacco consumption. The poll which was conducted in October 2016 highlighted perception of Nigerians concerning the prevalence of tobacco consumption, its harmful effects as well as the level of support for the implementation of Government’s policies on tobacco consumption. The poll results revealed that there is high prevalence (94 percent) of tobacco consumption in Nigeria however, 22 percent disclosed that they consume tobacco.

The poll results further showed that tobacco consumption is highly prevalent among the youth aged 18-25 years (56 percent). Interestingly, those aged between 18-35 years (58 percent) accounted for the largest proportion of Nigerians who made this assertion. Also, perception of the effects of smoking tobacco products revealed that most Nigerians (91 percent) acknowledged that it is very harmful and affirmation this cut across gender, geopolitical zones and age-groups. Lastly, poll results showed that majority of the respondents were in support of laws aimed at reducing the consumption of tobacco in the country. Remarkably, 79 percent advocated that the health warning labels on the packs of cigarettes should be strengthened, 87 percent indicated that smoking in public places should be banned, 76 percent want tougher restrictions on the sale of tobacco products, while banning of all forms of advertisement for tobacco products was supported by 71 percent of the respondents.

The chart below revealed that most Nigerians (71 percent) admitted that there is a high prevalence of tobacco smoking in the country. Also, 23 percent of the respondents stated that it is somewhat prevalent whereas 6 percent reported that tobacco smoking is not prevalent at all.

An evaluation of tobacco smoking amongst various age-groups revealed that tobacco consumption is highly prevalent among the youth aged 18-25 years (56 percent) and most of the respondents in this category are those aged between 18-35 years (58 percent). The prevalence of tobacco smoking among youths may be influenced by peer pressure, boosting their ego, getting tipsy, earning perceived recognition or respect, overcoming shyness and depression among other reasons.

The opinion of Nigerians about the effects of smoking cigarettes was revealed that most Nigerians (91 percent) considered it to be very harmful. This assertion could suggest that Nigerians are aware of the implications of tobacco consumption.

Lastly, poll results indicated that most of the respondents were in support of laws aimed at reducing the consumption of tobacco in the country. 79 percent advocated that the health warning labels on the packs of cigarettes should be strengthened, 87 percent indicated that smoking in public places should be banned, 76 percent want tougher restrictions on the sale of tobacco products, while banning of all forms of advertisement for tobacco products was supported by 71 percent of the respondents. 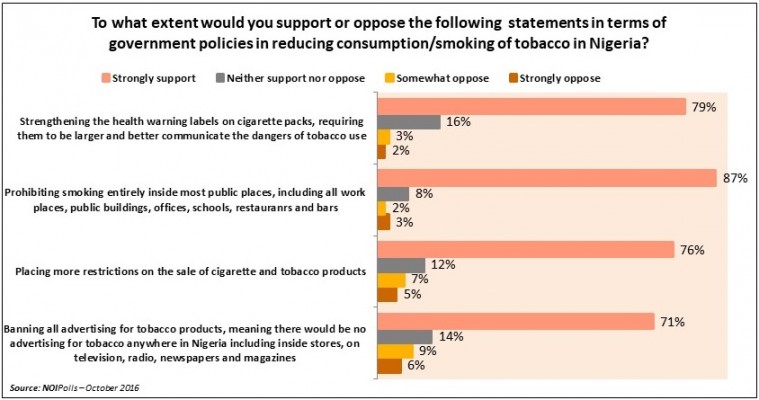 In conclusion, the poll results revealed that there is a high prevalence of tobacco consumption mostly among youths aged between 18-25 years. Interestingly, 91 percent of the respondent admitted that tobacco consumption is very harmful to a person therefore, there is the need for concerted effort in the area of sensitization to educate especially the youths on the dangers and devastating effects of tobacco smoking on human health. Finally, there is a need for the effective implementation of the Tobacco Control Act which has already been passed by the 7th Assembly and signed into law in 2015. The implementation and enforcement of the law will no doubt, bring about the much-desired control of tobacco smoking and thereby curb the attendant effects of diseases related deaths caused by tobacco consumption.

Sanofi announced today the successful completion of its acquisition of Principia Biopharma Inc (“Principia”) for $100 per share in...
Read more
Business & Economy

The Cross River Government has acquired 10,000 hectares of land across the state for the cultivation of Cocoa in the 2020/2021 planting season. Dr Oscar...
Read more
Business & Economy

The Board of Chemical and Allied Products Plc will meet in Lagos on Monday, October 19, 2020, to consider among other things, the Company’s...
Read more
Health

The Director-General of the Food and Agriculture Organization of the United Nations (FAO), QU Dongyu, today praised the work of the Codex Alimentarius Commission...
Read more
- Advertisement -

Tobacco responsible for 20% of deaths from coronary heart disease