The National Insurance Commission (NAICOM) recently increased the minimum paid-up share capital requirements for insurance and reinsurance companies by a minimum of 100% across all segments. Life insurers are expected to raise minimum paid-up capital from ₦2 billion to ₦8 billion; general underwriters from ₦3 billion to ₦10 billion; while composite and reinsurance companies have new minimum paid-up share capital requirements of ₦18 billion and ₦20 billion, up from ₦5 billion and ₦10 billion respectively. The regulator exempted takaful and microinsurance companies from the recapitalisation exercise. According to NAICOM, the new regulation takes effect immediately (May 20, 2019) for new applications while existing operators have until June 30, 2020, to comply.

NAICOM’s new capital requirements are much stricter than the earlier proposed Tier Based Minimum Solvency Capital (TBMSC) which was cancelled in October 2018, a few months after its announcement in July 2018. The major reason for the cancellation was the short timeframe within which operators were required to comply as well as the tier-based model which discriminated smaller insurance companies. Although these have been addressed by the new directive, capital requirements across the board are now much higher. This is similar to what the industry witnessed in its last recapitalisation between 2005 and 2007 when capital requirements for life companies increased from ₦150 million to ₦2 billion, general insurers from ₦200 million to ₦3 billion, composite underwriters from ₦350 million to ₦5 billion and reinsurers from ₦350 million to ₦10 billion.

The 2005/2007 recapitalisation saw a significant decline of the number of players from 103 direct insurers and four reinsurers operating as at 31 December 2005 with total core capital of ₦30 billion to 49 recertified firms (7 life, 23 general, 18 composite and 1 reinsurer) with a total capital base of ₦150 billion as at 31 December 2007. The consolidation involved major mergers comprising up to five insurance companies to form new companies with stronger capital. To ease the financial burden of the recapitalisation exercise, NAICOM obtained palliatives and concessions from other related authorities such as the Corporate Affairs Commission (CAC), Securities Exchange Commission (SEC) and the Nigerian Stock Exchange (NSE) on application processing fees on M&As and other associated activities. However, it took the Industry up to two years to adopt the new capital standards.

Although the recapitalisation exercise in 2005/2007 strengthened the Insurance Industry’s underwriting capacity, there were major notable hitches during the process. Due to uncertainties that surrounded identities of the recertified insurance companies, brokers withheld premiums paid by clients as against transferring the same to the underwriting firms. The resultant effect was a decline in premiums available for investments. A similar trend was observed in 2018 following the introduction of the TBMSC where a number of players were adversely impacted by large corporates (particularly in the oil & gas sector) demanding immediate payment of outstanding claims due to uncertainties on the insurers that qualified as Tier 1 insurance companies.

Going by available 2018 financials of 12 insurance companies, only WAPIC Insurance Plc meets the new minimum capital requirements with its current structure. However, some insurers such as Linkage Assurance Plc and NEM Insurance Plc have strong accumulated retained earnings that can potentially be converted to share capital through bonus issuances. On the other hand, a number of insurers meet the minimum paid-up share capital but have huge accumulated retained losses that have substantially or completely eroded capital. Therefore, substance over form, these companies do not have sufficient capital. We believe that this is worthy of consideration by the regulator. 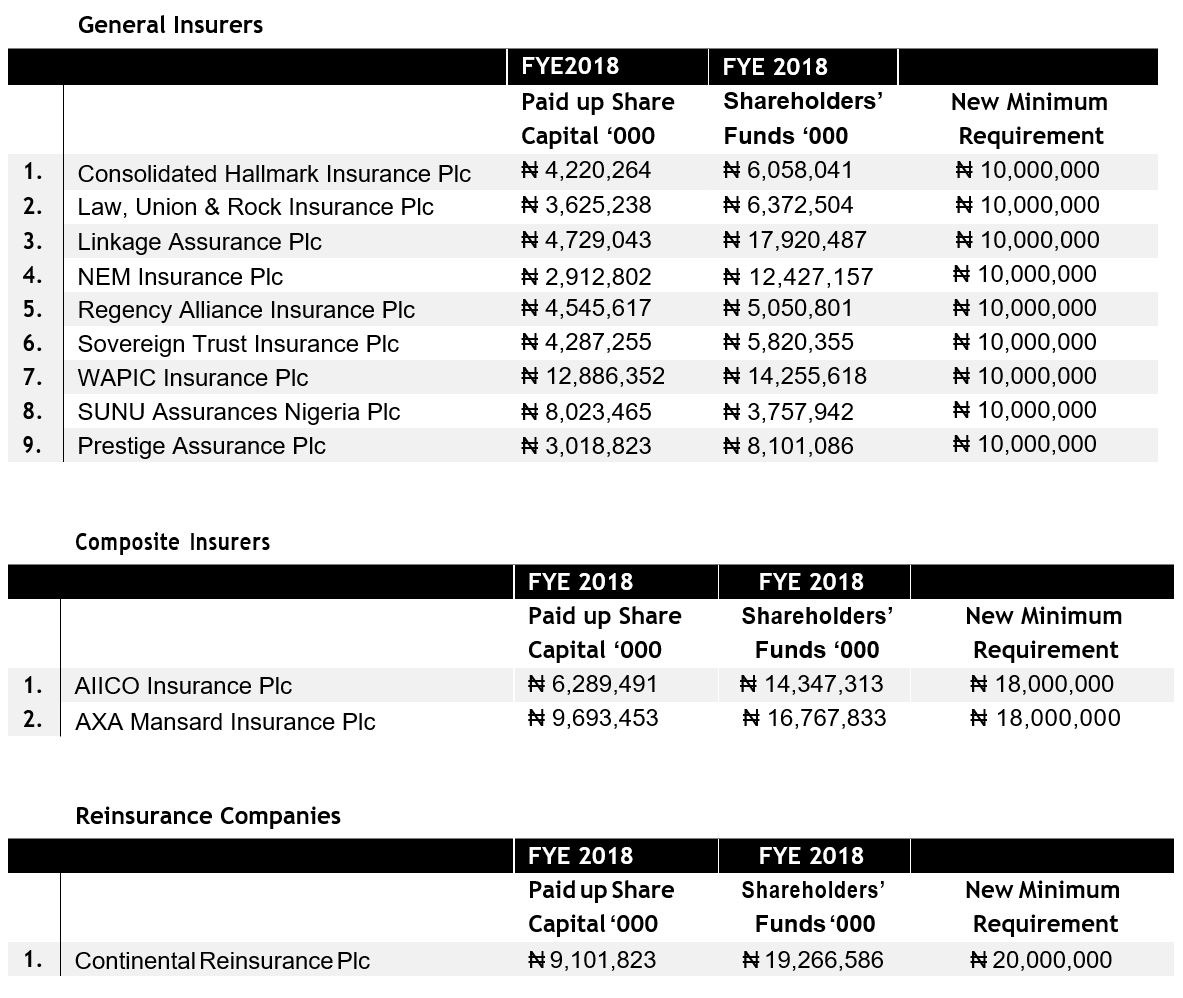 Overall, a significant percentage of underwriters would need to raise capital in the short term, leveraging shareholders support, brand equity and internally generated revenues. We recognise that compared to the 2005/2007 recapitalisation where there were a booming capital market and banks were allowed to invest or outrightly acquire controlling interests in insurance companies, underwriters now have limited avenues to raise capital. Therefore, recapitalisation will be largely achieved through mergers & acquisitions, foreign direct investments (FDI), private placements and rights issues. We remain cautiously optimistic about foreign direct investments, given persistent weak investor sentiments on account of political and economic uncertainties. Although NAICOM’s intention is to consolidate the highly fragmented industry through M&As, many insurance companies would need to raise additional capital as a prerequisite for a probable M&A. This would ultimately improve their position in merger negotiations and possibly reduce the number of insurance companies that would be required in a merger.

We expect a successful recapitalisation to redistribute market share among players. The Insurance industry is presently dominated by few players with top 5 operators accounting for 43% of gross premium income (GPI), 42% of total assets and 61% of profits. Overall, we believe that consolidation will bring about the much-needed stronger and better-capitalised industry, equipped to improve insurance penetration in Nigeria through technology and underwriting capacity.