The Banana Xanthomonas wilt (BXW) disease, caused by a bacterium, Xanthomonas campestris pv. musacearum (Xcm), is one of the most devastating diseases endangering the livelihood of millions of farmers in East Africa, the largest banana-producing and -consuming region in Africa.

It affects all banana cultivars grown in East Africa and only a wild type of banana native to Asia and one of the parents of modern cultivated bananas, Musa balbisiana, has been found to be resistant. However, very little is known about the molecular basis of susceptibility and resistance of banana to the bacterium. 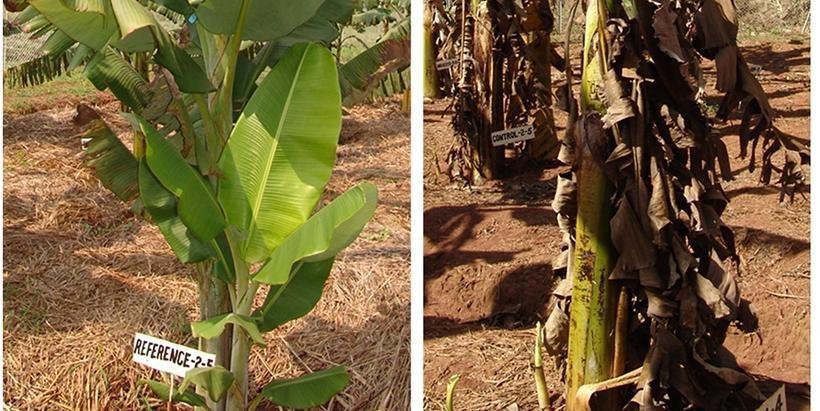 Therefore, to better understand the molecular basis of resistance and susceptibility to the disease, scientists from IITA-Kenya compared the transcriptome-wide differential gene expression of the BXW-resistant genotype Musa balbisiana and BXW-susceptible genotype Pisang Awak during early bacterial infection. Transcriptome profiling was performed through RNA sequencing in collaboration with New York University (NYU). The differentially expressed transcripts were further mapped to biotic stress pathways to identify genes associated with defense mechanisms. This study suggested the activation of both PAMP-triggered basal defense and disease resistance (R) protein-mediated defence in Musa balbisiana as an early response to bacterial infection.

The results of this research have been published in the international journal Scientific Reports (https://doi.org/10.1038/s41598-019-43421-1), and provide insights on the resistance mechanism in Musa balbisiana to the most damaging pathogen Xcm. This study reports the first comparative transcriptome profile of the susceptible and resistant genotype of banana during early bacterial infection.

One of the scientists leading these efforts Leena Tripathi, Principal Scientist in Plant Biotechnology at IITA, Kenya, said “This new, important knowledge can be used in crop improvement programs to transfer the disease resistance trait from wild type banana to farmer-preferred banana cultivars commonly grown in Africa or editing of genes related to susceptibility and/or negative regulation of plant immunity.”.

The BXW disease causes wilting of plants, premature ripening of the fruits, and eventually, death of the whole plant. Unlike in other banana diseases, which cause incremental losses over the years, the impacts of BXW disease are both rapid and extreme. The disease has caused estimated economic losses of about $2-8 billion over the last decade and significant reductions in production have resulted in major price increases.

Banana is the world’s fourth most important food crop and is critical to the food security and income generation of more than 70 million Africans. This study is, therefore, a foundation for further research that would lift millions of smallholder banana farmers out of poverty while helping to alleviate hunger and poverty in Africa through improved production and reducing crop management costs in banana farming. Banana is a major food and income source for smallholder farmers in countries like Burundi, Kenya, Rwanda, Tanzania, Uganda, and eastern parts of the Democratic Republic of Congo.

A new meeting facility was commissioned at IITA headquarters recently. The meeting room, based at the Facilities Management Services (FMS), is called the Savanna Room. It...
Read more

28 March 2020 - IITA Director-General, Dr Nteranya Sanginga has said that the Institute is strategically working towards providing support for the federal and state governments in...
Read more

Think back over the last month. What types of food have you and your family consumed? Have you eaten a balanced and diversified diet?...
Read more