ORIN MURDER: Fayemi Commiserate With Community, Promises To Put An End To Banditry In The State

Ekiti State Governor, Dr Kayode Fayemi, has commiserated with the people of Orin Ekiti on the murder of Mr Sunday Ilori, a hunter who was reportedly killed by some herdsmen in the town over the weekend, assuring that the state government would provide adequate security in all communities in the State.

The governor who visited the community early on Monday morning to condole with the people also assured that nobody would take over their land for any reason. 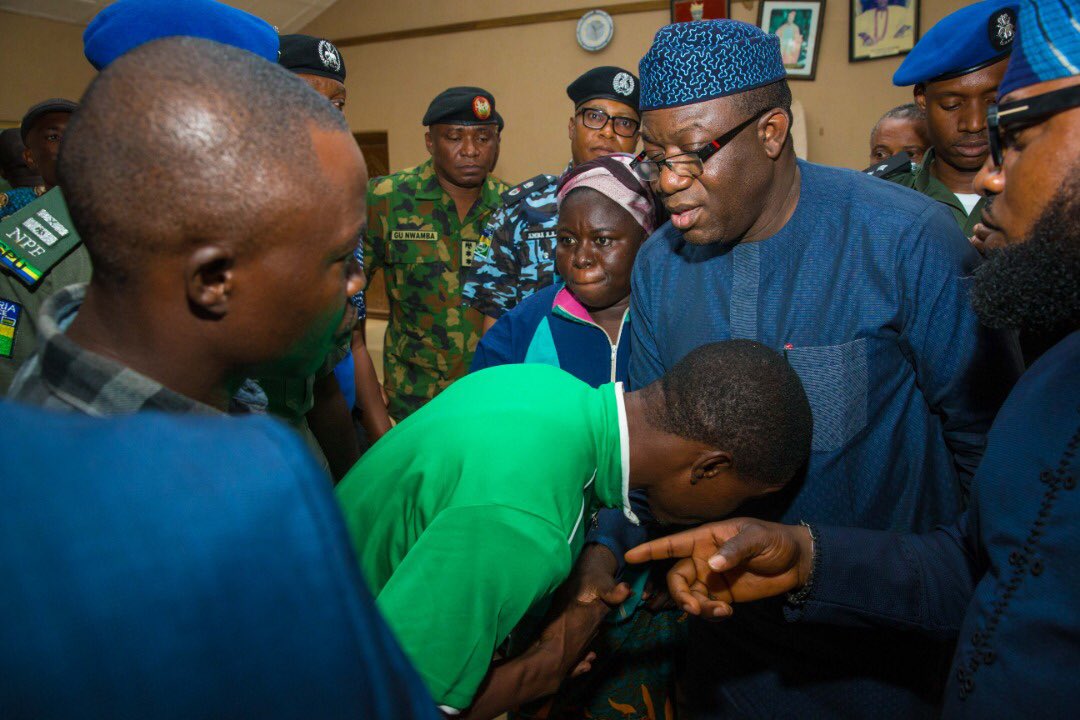 Dr Fayemi who addressed the community leaders, as well as the protesting women and youth, urged the people to collaborate with government and security agencies by providing information on suspicious movements and activities in their areas. He added that collaborative efforts by all security stakeholders in the state would help rid the state of banditry and other forms of criminal activities.

The Governor also directed that a police post be provided near the farm settlement and that security patrol be stepped up in the town to forestall any form of insecurity in the area. He also tasked security agencies to fish out the culprits and ensure that they face the maximum wrath of the law.

“Whoever violates the law and is caught in the act will face the wrath of the law whether he is Yoruba, Fulani, Tiv or whichever tribe the person may come from. Anybody who commits a crime will not go scot-free. If we don’t give the security agents around us adequate information, it will be difficult to arrest and prosecute such an offender. That is why there is a need for us all to collaborate. We must play our own roles too and inform the appropriate security personnel.” Fayemi said.

“We have youths, hunters and Peace Corps who should collaborate with security agents. We cannot relocate Orin to another place for any reason. The government will provide adequate security in this community so that everyone can ply their trades without fear.

“This is your land. As the governor, I have authority over all the land in the state and I am assuring you that no one will take your land from you for any purpose.”, he said.

While reacting to a revelation that the murder culprits were bandits who tried to cart away with some government property at the farm settlement, Governor Fayemi said the settlement had become an abode for the bandits because it was left untended since 2014.

Earlier, the daughter of the deceased, Mrs Olanike Akinwumi had narrated how the incident happened; maintaining that her father did not go hunting when he was killed on the farm.

According to her, the deceased went to the farm early in the morning in response to a call that some bandits were in the farm settlement and was thereafter killed there.

During the condolence visit, community leaders tabled a number of requests before the governor ranging from the resuscitation of the farm settlement to set up a police post in the community.

Ekiti State Governor, Dr. Kayode Fayemi, has reiterated the commitment of his administration to transit from the “make-use-dispose” orientation of materials utilization to an...
Read more

The Government of Ekiti State has reiterated its commitment to exploring every necessary avenue to ensure that the State Fire Service Department is well-positioned...
Read more

The Governor of Ekiti State, Dr Kayode Fayemi, has called on women to utilize the opportunity of their participation in economic and political activities...
Read more