The new power Poll released by NOIPolls for the second quarter (Q2) of 2019 has revealed that power supply to Nigerian households experienced a marginal decline to stand at 31 percent in Q2 from 37 percent obtained in Q1, 2019.

This decline may be attributed to the continuous breakdown of the national grid and other daunting challenges experienced at both levels of generation and transmission of electricity in the country within this period.

The decline in power supply has in no doubt hampered economic activities, especially of businesses whose operation depends majorly on the power supply. On the bright side, it is worthy to note that there has been a steady increase in power supply from the month of April to June 2019. This steady increase observed in Q2, 2019 could be ascribed to the raining season as the water level in the hydroelectric power generation is within expected capacity.

The poll results also revealed that the quarterly average cumulative hours of power supply experienced a marginal decline to stand at 9.2 hours in Q2, 2019 from 9.6 hours in Q1, 2019. This cumulative hourly average for Q2, 2019 is a considerable far cry from 24 hours of power supply which is required for the overall progress and development of the country and its citizenry.

The power situation in Nigeria has continued to worsen over the years despite the weighty and substantial investments in the sector by past and present administrations in the country. What is more worrying in the power conundrum is that the more money is expended in the sector, the darker the country becomes as regards to the power supply.

For instance, Nigeria has expended an estimated sum of N5 trillion ($31.45 billion) in the last 20 years to generate power, however, only a maximum of about 5,074 Megawatts of electricity could be generated within this period; which is still grossly inadequate and derisory. It is also worthy of note that the national grid in Nigeria has collapsed three times in 2019 thereby plunging the country into darkness.

This detrimental and undesirable event highlights a major challenge in the power sector which needs urgent attention due to its devastating effects on the country’s economy. It must also be stated that for a country of approximately 200 million Nigerians, a minimum of 30,000 megawatts of electricity needs to be generated. It is against this backdrop that NOIPolls conducted its quarterly power poll to assess electricity distribution to Nigerian households in the second quarter of 2019.

Quarterly analysis of results revealed that a larger proportion of Nigerians (37 percent) reported that they experienced better power supply to their respective households in Q1, 2019 than in Q2, 2019 (31 percent). This signifies a 6 percent decline when Q1 is compared to the Q2.

Further findings over the period in view showed that the average hours of cumulative power supply to Nigerian households nationwide was also highest in Q1, 2019 at an average of 9.6 hours daily.

Monthly analysis of power supply to Nigerian households Q2, 2019 revealed a steady increase in the proportion of Nigerians who experienced an improvement from April (28 percent) to June (36 percent). Although a closer at the first half of 2019 revealed that more Nigerian households experienced improvement power supply in January (46 percent) compared to any other month in view. 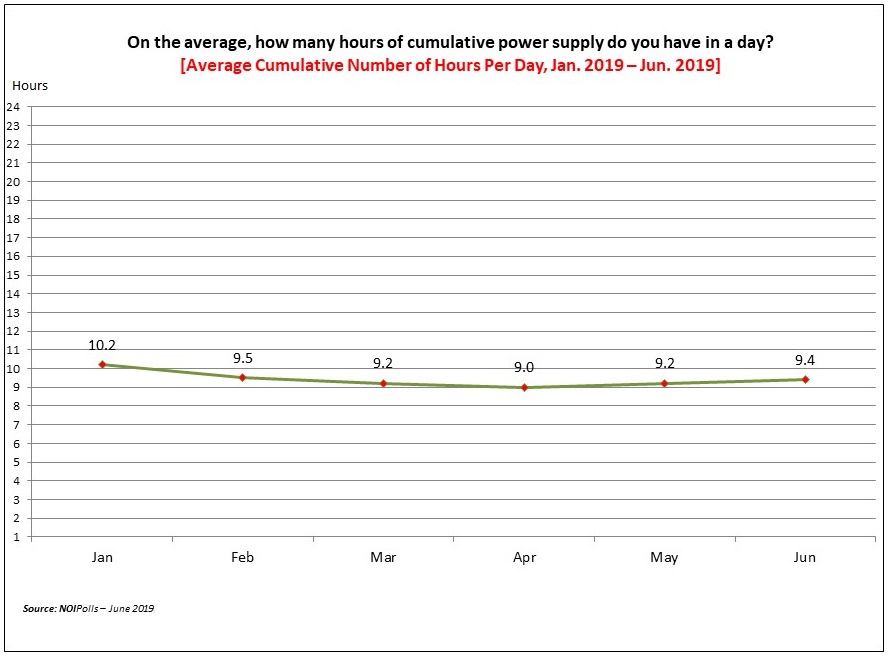 In conclusion, the poll has revealed a marginal decline in power supply in Q2, 2019 when compared to Q1, 2019. While NOIPolls continues to track the state of power supply in the country, trends have revealed that Nigeria may continue to experience challenges in power supply unless a drastic, concerted and spirited effort is put in place to upgrade the power generation and distribution, as well as pricing in the country.

It is imperative that all stakeholders in the power sector and the government to revaluate the strategies set up for addressing the issue of power in Nigeria as not much progress has been recorded since the privatisation of the sector. This exercise should a higher level of concentration on renewable sources of energy. This singular action of solving the power challenges in the country will bring about the much-needed boost to the country’s economy thereby fostering prosperity and progress for all Nigerians.

Abuja, Nigeria. January 7th, 2020 – The New Year celebration is one of the most celebrated events in Nigeria and often characterized by various...
Read more