Given that the dangers associated with child labour in Nigeria, NOIPolls presents findings from its past poll on “Child Labour in Nigeria”. The poll which was conducted in the week commencing June 3rd 2019, assessed the opinions of Nigerians regarding the prevalence, knowledge, possible causes of child labour in the country as well as various ways to curtail this menace.

The finding revealed that most Nigerians (84 percent) believe that the issue of child labour is prevalent in the country. The poll further showed that 8 in 10 Nigerians claimed that they normally see children engage in various forms of labour in their respective localities. Data from the International Labour Organization (ILO) reported that the number of working children under the age of 14 in Nigeria is estimated to be 15 million. According to the Country Director of the International Labour Organization (ILO), Dennis Zulu, during a two-days’ workshop on ACCEL Africa on Friday, May 3rd in Abuja, statistics revealed that about 43 percent of children in Nigeria aged between 5 to 10 years were involved in child labour.

Despite several measures to combat child labour, it continues to remain a great concern in Nigeria. The Child Rights Act which was passed into law in 2003 defines a child as one who is below the age of eighteen years and it categorically provides that such a child’s best interests shall remain paramount in all considerations. Sixteen years after being incorporated into Nigerian law, the child labour situation has remained a major issue as millions of children are still engaged in child labour activities. For instance, the poll revealed that children are often seen engaged in street hawking (58 percent), domestic work (11 percent) and street begging (10 percent) amongst other labour activities within their localities. Perception on street hawking showed that it is most predominant in the Southern region (79 percent on the average) than in the Northern region (43 percent on the average). However, opinions revealed that street begging and domestic work are highest in the Northern region than in the Southern region.

Interestingly, Nigerians blamed the prevalence of child labour on poverty (58 percent), parental neglect (16 percent) and bad economy (10 percent). Moreover, most of the respondents (27 percent) from the poll recommended that more jobs should be created as the rate of unemployment in the country could be a contributing factor in the issue of child labour. In addition, 21 percent suggested that the government should improve the economy, 18 percent advocated for free education amongst other recommendations. It is, therefore, important that the government and concerned stakeholders’ work together to tackle the issue of child labour by implementing more programmes to eradicate poverty and improve the conditions of workers. The government should also create an enabling environment for small scale businesses to thrive in Nigeria to improve the economy and increase employment opportunities.

The first question gauged the prevalence of child labour in Nigeria and findings from the poll are particularly worrisome as a large share (84 percent) of respondents nationwide believe that the issue of child labour is prevalent in Nigeria. This corroborates findings from the International Labour Organization (ILO) which revealed that the number of working children under the age of 14 in Nigeria is estimated to be 15 million.[2]

Furthermore, trend analysis revealed a 10 percent decline when the current finding is compared with the result obtained in 2013. This suggests that concerned stakeholders could have embarked on several awareness campaigns that enlightened the public on the negative effects of child labour in society at large. However, 84 percent is still high thus a need for more eff­ort to further reduce this figure drastically.

Subsequently, the poll revealed that the larger proportion of respondents (80 percent) disclosed that they have observed children engage in one form of labour in their respective localities. Analysis by region revealed that averagely, more respondents from the Northern region (84 percent) than the Southern region (74 percent) made this assertion. Trend analysis also revealed an 8 percent increase in the number of children seen engaged in various forms of labour when the 2019 result is compared to the findings obtained in 2016. 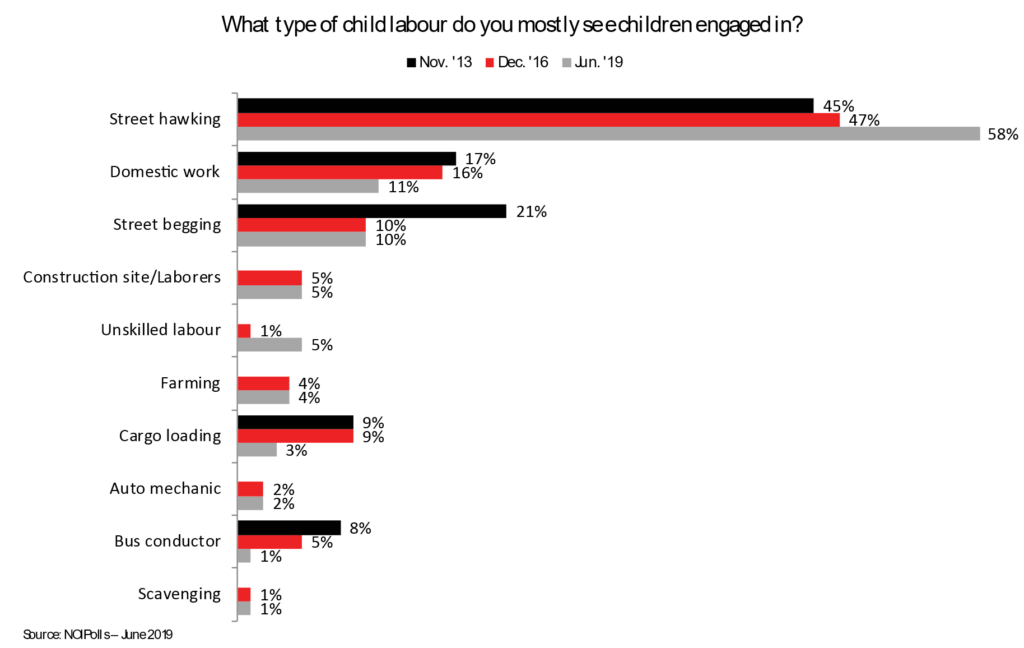 Respondents who indicated that they see children engaged in di­fferent labour or jobs were further probed and asked to mention some of these labour or jobs they have seen children engaged in. The findings revealed that majority of the respondents (58 percent) specifically mentioned that they have seen children engage in street hawking in their various localities and the South-South zone accounted for the larger share of Nigerians in this category. This is followed by Nigerians who cited domestic work (11 percent) and street begging (10 percent) amongst other mentions. Perceptions on street hawking showed that it is most predominant in the southern region (79 percent on the average) than in the Northern region (43 percent on the average). However, opinions revealed that street begging and domestic work are highest in the Northern region than in the Southern region. 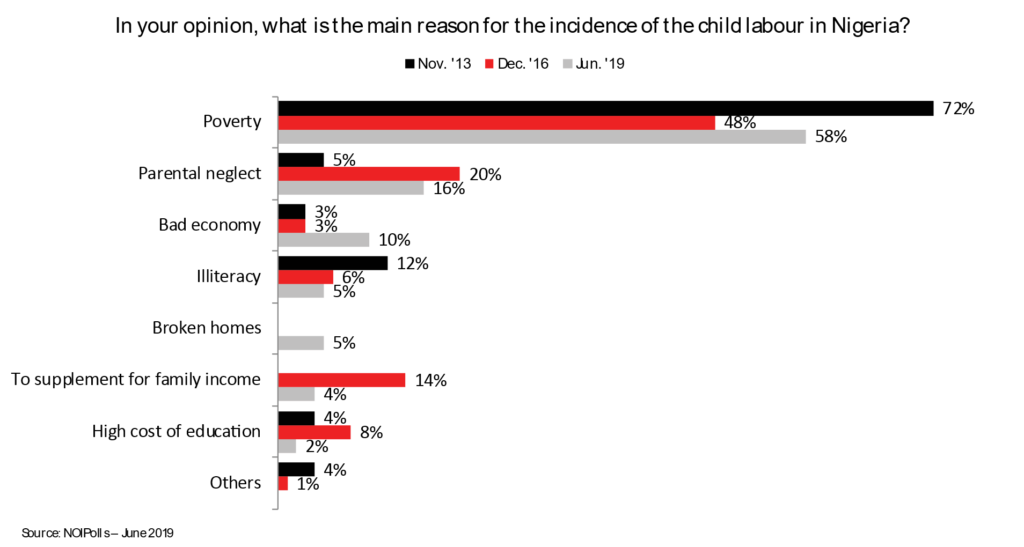 Furthermore, poverty (58 percent), parental neglect (16 percent) and bad economy (10 percent) were the top three factors mostly blamed for the incidence of child labour in Nigeria. While poverty seems to be the major factor Nigerians attribute to the prevalence of child labour, trend analysis revealed that this perception has declined in 2019 when compared to 2013. 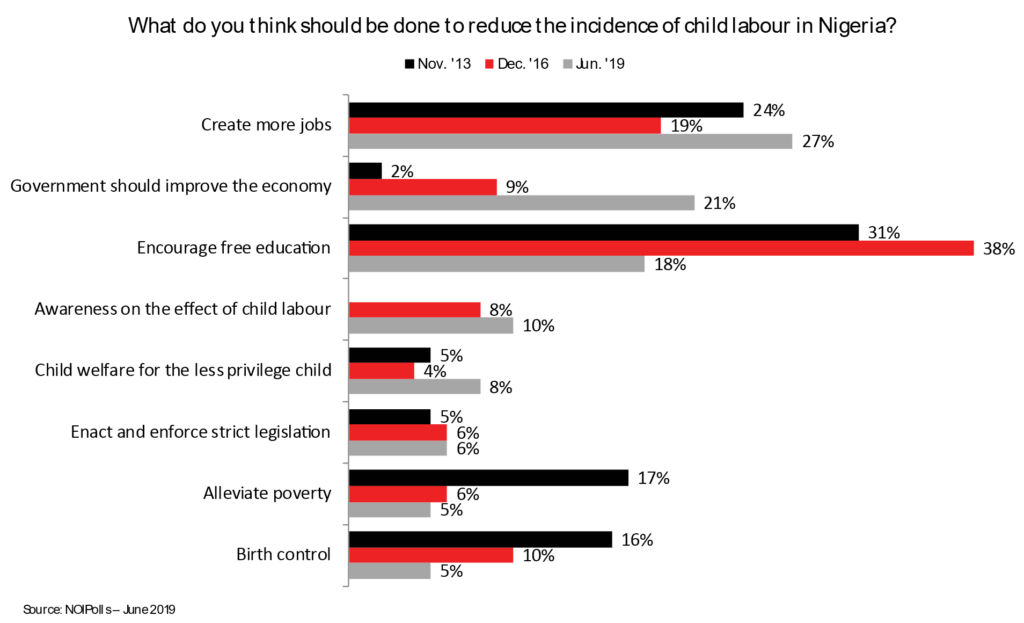 Perceptions on how to curb the incidence of child labour in the country were gauged and a larger share of the respondents (27 percent) believe it is by creating more jobs. This will go a long in reducing poverty across the country, thereby reducing the need for children to complement family income. 21 percent suggested that the government should improve on the economy while 18 percent recommended free education.

In conclusion, the poll has shown that the menace of child labour is indeed an issue that needs to be taken more seriously in order to reduce the e­ffect on both the children and the society at large. The various government agencies and stakeholders need to be fully involved in dealing with the issues associated with child labour. The Child Right Act which was passed into law in 2003 in order to curb the menace of child labour has not been implemented by about 11 states in Northern Nigeria. The diff­erent states that have not adopted the Act should be compelled upon to ensure that the Child Right Act is given utmost concern in order to curb the dangers associated with child labour.

The government should also create an enabling environment for small scale businesses to thrive in Nigeria in order to improve the economy and increase employment opportunities. Furthermore, the role of education in reducing the issue of child labour cannot be overemphasized as education remains the basis of growth and development. Additionally, 5 percent of the respondents recommended birth control as a measure to curb child labour. Hence, parents should employ e­ffective family planning methods to have a limited number of children they can e­ffectively take care of. The government on its part could put mechanisms in place to ensure public enlightenment and implementation of family planning while health workers could also be saddled with the strategies for implementation.

Finally, the poll has clearly shown that the incidence of child labour is grossly under-reported as 82 percent of the respondent are not aware of the reporting channels. Therefore, it is important for government agencies and concerned stakeholders to embark on an intense awareness campaign on the various ways to report the incidence of child labour.

The number of working hours lost across the world in the first half of 2020 was significantly worse than previously estimated, while the highly...
Read more

Almost all of the world’s workers, some 94 per cent, were living in countries with some type of workplace closure measures in place in...
Read more

Millions of more children risk being pushed into child labour as a result of the COVID-19 crisis, which could lead to the first rise...
Read more

ILO: More Than One In Six Young People Out Of Work Due To COVID-19

More than one in six young people have stopped working since the onset of the COVID-19 pandemic while those who remain employed have seen their...
Read more
- Advertisement -