Globally, the proportion of people working in the agriculture sector has seen a steady decline. However, looking at global averages is not enough to understand this trend, as this decline has not been evenly distributed. We break down the world population into two groups (measured through either income or consumption expenditure): the bottom 40% (the poorest people in any given country) and the upper 60% of the income distribution.

Drawing from the Global Monitoring Database of household survey data, the graph highlights a global trend where employment in agriculture is lower for the better-off, both across richer and poorer countries and between richer and poorer people within each country.

Percentage of people working in agriculture 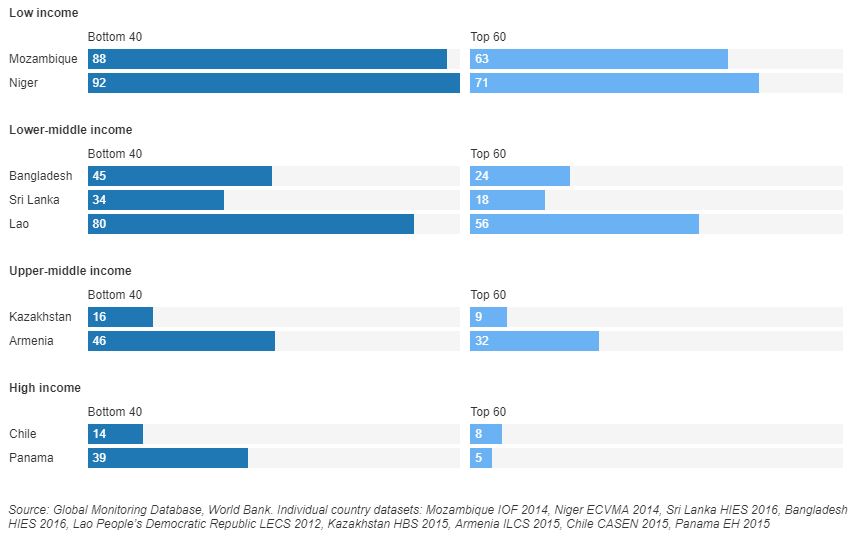 Unsurprisingly, more of the bottom 40% work in the agriculture sector than households in the top 60% regardless of national income level.

Moving to the lower-middle-income group, the proportion reduces significantly for Sri Lanka and Bangladesh, where far less than half of the poorest households work in agriculture, and this number drops below 25% for the richer households. But Lao PDR still shows relatively high engagement in the agriculture sector for both poorer and richer households.

Among upper-middle-income countries, Kazakhstan and Armenia look very different. Armenia’s proportion of agriculture workers resembles that of lower-middle-income countries, whereas Kazakhstan’s employment in the sector is closer to that of high-income countries. As countries enter the high-income group, the percentage of the population working in agriculture declines dramatically across the distribution, and although there is much variation in the breakdown across countries, households in the bottom 40% are consistently more likely to work in the sector than their wealthier compatriots.

These trends highlight the importance of increasing agricultural productivity in a way that benefits the poorest 40 percent, who are more economically reliant on the sector, while also encouraging a transition into alternative income-generating activities that can present important pathways out of poverty.

Poverty and Inequality: What is the outlook?

Recently, the National Bureau of Statistics (NBS) published Nigeria’s Poverty and Inequality report for 2018-19. According to the report, 40.1% of the total population...
Read more

Think back over the last month. What types of food have you and your family consumed? Have you eaten a balanced and diversified diet?...
Read more