Abuja, Nigeria. August 27th, 2019 – The Nigerian health system has been evolving over the years through various health care reforms aimed at tackling the public health challenges in the country. For instance, the National Health Insurance Scheme (NHIS), the National Immunisation Coverage Scheme (NICS), the Midwives Service Scheme (MSS) and the Nigerian Pay for Performance scheme are some of the reforms which should ordinarily address the health care challenges faced in the country. The NHIS was launched in 2005 however, news reports and statistics have shown that the scheme only covers less than 10 per cent of Nigerians. This implies that most of the vulnerable population are left at the pity of health care services which in most cases are not affordable.

Given the above background, NOIPolls presents findings from its previous poll on health insurance which was conducted in August 2017. The poll gauged the perception of Nigerians regarding health insurance in the country. Findings from the poll revealed that as many as 89 percents of the population pay for healthcare services out-of-pocket. This finding does not in any way coincide with the main purpose of the National Health Insurance Scheme (NHIS) which is primarily securing universal health coverage and access to adequate and affordable healthcare in order to improve the health status of Nigerians. Further findings from the poll revealed that only 9 per cent claimed they have some form of health insurance, of which 71 per cent indicated NHIS and 21 per cent indicated Private Health Management Organizations (HMOs) as their provider. Interestingly, a substantial proportion of Nigerians (78 per cent) who were not covered expressed willingness to pay a small amount of money monthly/yearly to get enrolled for health coverage.

The chart below showed that the most utilized healthcare facilities by Nigerians is government-owned hospitals (primary, secondary and tertiary health facilities) as revealed by majority of Nigerians (63 per cent) interviewed. This was followed by respondents who visit private hospitals (39 per cent) and Pharmacy/Chemist stores (17 per cent), and those who self-medicate (13 per cent) amongst others. 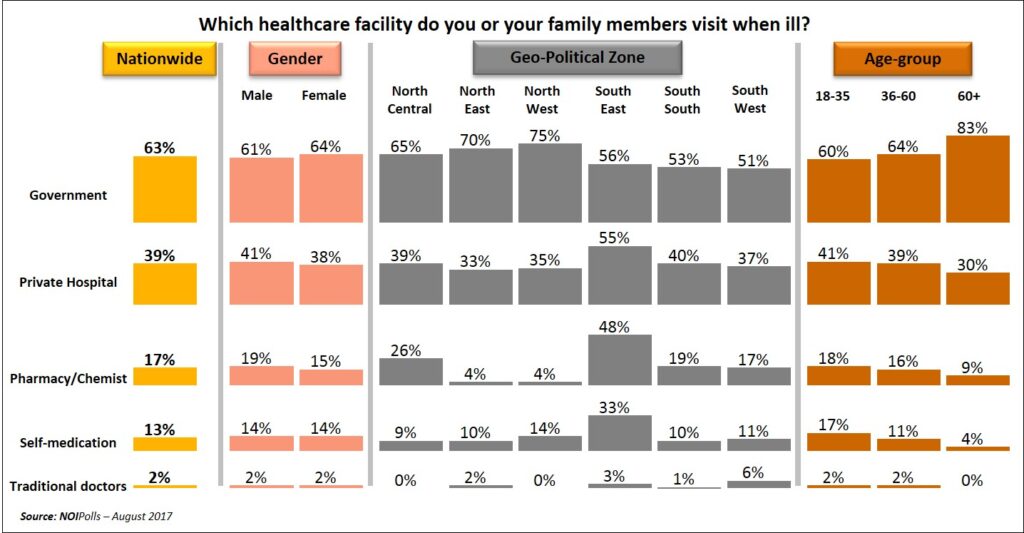 Subsequently, when asked how they pay for healthcare services, most of the respondents (82 per cent) reported that they pay “Out of pocket”, and this cuts across gender, geo-political zones and age groups. Further analysis indicated that a total of 89 per cent actually pays out of pocket since 7 per cent of respondents said they received support from friends and family, which can also be categorised as out of pocket expenses. This was followed in a far distance by only 9 per cent of the respondents who claimed that they access health care services using their health insurance scheme. This finding clearly highlights the low penetration of health insurance among the populace, which urgently needs to be bridged in order to achieve universal health coverage.

Read Also:  ORIN MURDER: Fayemi Commiserate With Community, Promises To Put An End To Banditry In The State

Subsequently, the poll also ascertained the willingness of Nigerians who pay out of pocket to pay a small amount of money monthly or yearly (premium) in order to access healthcare services when they need it, especially in time of emergency. In response, 78 percent of the respondents expressed their willingness to pay a small amount to get enrolled into the health insurance scheme. Interestingly, during the course of the poll, some respondents made on the spot inquiries on how to enrol in a health insurance scheme. These findings clearly demonstrate the critical need for sensitization and awareness campaigns to mobilize the citizenry on the need and benefits of health insurance.

In conclusion, the National Health Insurance Scheme was set up with the objective of making health care accessible and affordable to many Nigerians, however, the poll revealed that 89 per cent of Nigerians do not have any form of health insurance, thus they pay out of pocket to access healthcare services. Of this proportion, 78 per cent expressed their willingness to pay a small amount of money to enable them access service whenever they fall ill. These findings clearly highlight the low penetration of health insurance across the country and calls for intensive sensitization and mass mobilisation of the populace. Also, there is an urgent need to amend the NHIS Act and enact laws to make the scheme compulsory for all Nigerians as this would ensure proper monitoring, efficiency, proper utilization of the health facilities and ultimately better health care delivery system in the country.

Taraba State Governor, Arc. Darius Dickson Ishaku has called on the people of the state to register en mass in the contributory Social Health...
Read more

The Lagos State Government, in its commitment towards ensuring that all its workforce have access to good, quality and affordable healthcare, has commenced the...
Read more