According to the survey, the manufacturing composite PMI expanded to 57.9 index points in August 2019 (from 57.6 in July 2019), the twenty ninth consecutive expansion. Despite the increase in manufacturing composite PMI, new orders expanded slower to 57.1 in August 2019 (from 57.2 in June 2019) and forced producers to reduce their production – output production level index fell to 58.7 (from 58.9) –, as sales slowed amid lower consumer disposable income. 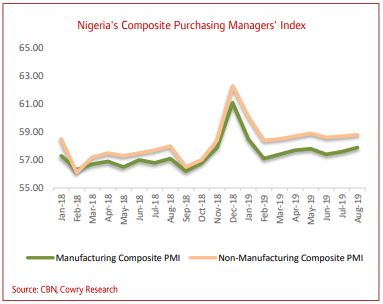 Given the slow down in production output and faster supplier delivery time (index rose to 58.3 in August from 57.5 in July), raw materials/work-in-progress grew faster to 58.7 from 56.2 as the producers took advantage of cheaper prices of raw materials – input prices expanded slower to 57.0 (from 59.5) to increase their stocks. Also, manufacturers cut selling prices – output prices expanded slower, to 50.3 (from 52.2) – in order to push output which they did not succeed with given the slow down in new orders.

The number of new hires recorded by manufacturers reduced in tandem with the lower production volume – the index for employment fell to 57.1 points in August 2019 (compared to 57.3 in July 2019). The non-manufacturing sector also recorded faster growth as its composite PMI expanded faster to 58.8 index points in August 2019 (from 58.7 index points in July 2019), the twenty-eighth consecutive expansion. This was partly driven by faster expansion in business activity to 58.2 (from 57.6) which necessitated the increase in inventory level to 59.8 (from 58.9).

Meanwhile, the August 2019 Business Expectations Survey (BES), conducted by Central Bank of Nigeria (CBN), showed that respondents expressed optimism on the macroeconomy for the month of August as the overall confidence index (CI) registered 28.6 index points (better than 28.1 registered in July).

Business outlook for September revealed even greater confidence in the macroeconomic environment with 64.7 index points. This was the case, particularly for the industrial and services sectors. Businesses remained optimistic in their outlook on the volume of business activity and average capacity utilization as their indices stood at 14.3 and 15.9 index points in August from 13.0 and 14.1 respectively registered in July despite the constraints of insufficient power supply and high-interest rate amongst other factors. Elsewhere, CBN and Deposit Money Banks have agreed to seize the bank savings of customers who refused to pay back borrowed money. The agreement at the 345th Bankers Committee meeting was such that the deposit of the defaulter in one bank will be used to settle his unpaid loan in another bank. For this to be effective, bank borrowers would be made to sign an agreement that in case of a default their banks would have a right to access the borrower’s other banks’s accounts.

We note the increase in the PMIs which was not engendered by new orders. Amid Nigerians low disposable income, producers were forced to keep their production output and selling prices low. This, which could have a negative impact on economic growth, speaks to the need for urgent implementation of the new minimum wage and 2019 budget. In addition, Federal Government should come up with market-friendly policies which will encourage private funds to contribute to the delivery of quality infrastructure in order to reduce the cost of factors of production in Nigeria – a burden that it can’t carry alone. Meanwhile, we expect the agreement signed by the DMBs and CBN to facilitate the reduction of non-performing loans as borrowers become weary of collecting loan they don’t intend paying back.

As many markets across the globe begin to ease living restrictions and many consumers start to take tentative steps outside their homes, the world...
Read more
Brand News

The Nigerian Stock Exchange in collaboration with the Milken Institute is set to host the inaugural edition of our Webinar Series on Sustainable Capital...
Read more
Business & Economy

African Equity Market: On The Path Of Recovery

Despite the COVID-19 pandemic that has engulfed the African continent since Feb-2020 and the associated lockdown measures that were put in place by the...
Read more
Brand News

Following MTN’s commitment of N500 million to support the acquisition of critical medical supplies for healthcare professionals on the frontlines, the MTN Foundation has...
Read more
- Advertisement -

The Central Bank of Nigeria (CBN) held its bi-monthly Monetary Policy Committee meeting today May 28, 2020. Against the 2-day traditional timeline for the...
Read more

A little over two years after it was granted a commercial banking license with regional authorization by the Central Bank of Nigeria (CBN), the...
Read more
- Advertisement -