The real GDP growth in Q2 came in lower by 0.16% to 1.94%. Though weaker than widely expected, the growth is the strongest Q2 GDP expansion since 2015. This year (Q1+Q2), the economy has achieved an average growth of 2.02%. This is 0.28% below the IMF’s forecast of 2.3%. To achieve this growth target, the economy needs to grow by at least 2.6% in H2’19. This calls for the use of proactive policies to boost aggregate investment and stimulate growth.

A breakdown of the GDP data shows that 6 activities expanded whilst 5 contracted and 8 decelerated (slowed). The contracting activities this quarter were mainly those that are labour intensive and interest-rate sensitive. Seasonality played a major role in the GDP outcome. The planting season is usually a period of scarcity and high prices. 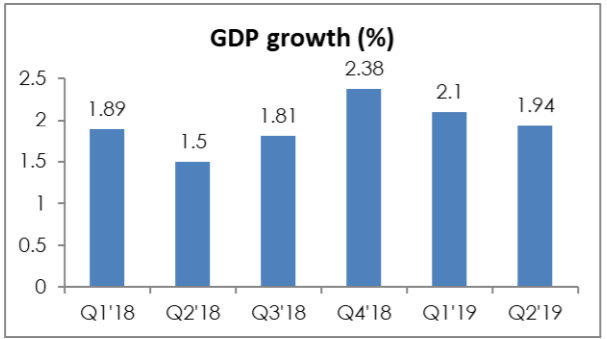 The purchasing managers’ index (PMI), a measure of the performance of the manufacturing sector, declined to 49.9 points in June from 56.9 points in March. This sector is highly exchange rate-sensitive and was hit by the adjustment in the exchange rate for computing custom duty to N326/$. For the first time in almost two years, the sector recorded negative growth (-0.13%). Also noteworthy, is the relapse by the real estate sector (-3.84%) into contraction after a temporary recovery in Q1.

Petroleum Recorded Positive Growth while Non-oil Either Slowed or Contracted

The oil sector expanded by 5.15% in Q2’19, after four quarters of negative growth. However, the non-oil sector’s growth slumped to 1.6% from 2.5% in Q1’19. This sluggish performance was due to slower growth in the agriculture, construction and ICT sectors alongside contraction in manufacturing and trading activities.

A breakdown of the GDP shows that the fastest growing sectors were mainly in services – oil & gas (5.15%), human health (1.13%) and education (0.96%). These sectors contribute approximately 12% to GDP and employ less than 10% of the Nigerian labour force.

The decelerating sectors are also interest-rate sensitive and employment elastic – Agric (1.79%) and construction (0.67%). This tepid performance was largely due to seasonal factors. Q2 is usually the planting season of most Agric commodities, thereby creating scarcity and pushing up prices. The rainy season also commenced in Q2 and slowed construction activities.

The weak Q2 GDP growth indicates that the economy is in need of a fiscal stimulus. This should be the focus of the fiscal team as they formulate the 2020 budget and the medium-term policy framework. The fiscal catalyst, however, needs to be supported by pro-cyclical monetary policy. Although the 50bps cut in the monetary policy rate to 13.5%p.a. in May was expected to induce credit growth and boost output, the Q2 numbers suggest that this measure is inadequate or untimely.

Coincidentally, Africa’s two largest economies who are embroiled in xenophobic tit for tat released their GDP numbers within 24 hours of each other. South Africa expanded by 3.1% and Nigeria 1.94%. A rapprochement between this two will go a long way to boosting trade, investment and output.

The Q2 GDP growth corresponds with the Q2 PMI readings. The readings contracted (49.5 points) in July before recovering to 50.9 in August. If this growth momentum is sustained in September, it suggests that the level of economic activities will improve.

Also, the harvest season for most commodities is the third quarter. This should have a positive impact on Agric output. As the newly formed cabinet sets out to implement the 2019 budget, the construction and real estate sectors also stand to benefit from capital spend. Hence, we expect a marginal increase in Q3 GDP growth to 2.1%.

The Nigerian economy grew by 1.87% on a year-on-year (YoY) basis in Q1’20. The GDP performance represented a 23 basis points decline from the...
Read more

The National Bureau of Statistics (NBS) released Q1-2020 GDP data which reflected a growth of 1.87% in real terms against 2.10% recorded in the...
Read more
- Advertisement -