In the 2020 budget proposal put forth by the Federal Government to the Market Performance w/wNNational Assembly, the government has earmarked ₦2.67 trillion for the wages in ministries, departments and other agencies of government. If approved by the national assembly, the wage bill would have increased by 27% over three years.

The Minister of Finance, Mrs Zainab Ahmed, stated that the rise in wages is due to the increase in personnel cost as a result of the creation of new ministries and additional ministers.

Slowing growth in the nation, coupled with declining oil revenue puts Nigeria in a precarious position. The country remains largely dependent on oil and tax revenue to meet its funding needs and raising its wage bill as a result of expanding the size of its cabinet will constrain its ability to effectively allocate resources. Government revenue from crude sales is projected to decline as global trade tensions continue to weigh on oil prices. 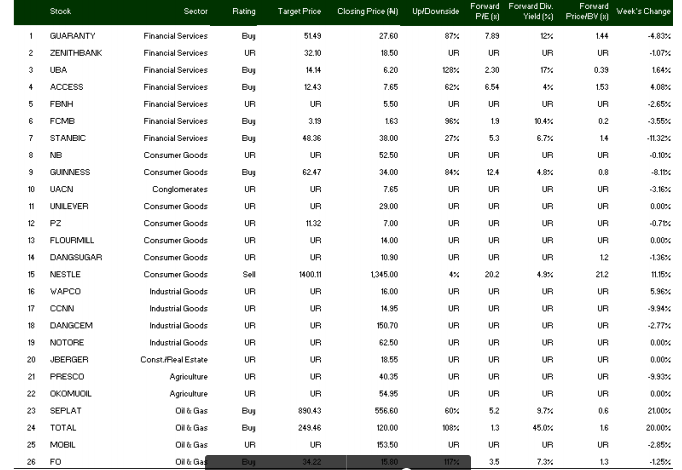 Furthermore, with Nigeria still lacking the adequate infrastructure needed to drive economic growth, the increase in wage bill is likely to suppress Capex spending by the federal government, which could further dampen the outlook for economic growth.

• Equity: The market declined marginally last week despite upward movement in some large-cap stocks. With some heavyweights recording significant capital appreciation w/w, we expect portfolio rebalancing activity to further spur buying an interest in the market.

• Stock Watch: Extending Thursday’s performance, SEPLAT again closed as the best performing stock on Friday as we saw last-minute trades at a maximum price. The counter closed at ₦556.60, representing a 10.00% (21.00% w/w) rise above the previous close.

• Fixed Income: With system liquidity at a robust level, we expect positive activity in the bills space. In the bond market, we expect the mixed sentiment to persist as investors continue to monitor macroeconomic developments in the country.

Union Diagnostic and Clinical Services Plc hereby wishes to inform The Nigerian Stock Exchange and the investing public that it was unable to file...
Read more
Brand News

Total sales affected by the impact of the worldwide pandemic Initial signs of recovery in individual markets at the end of Q2  ...
Read more
- Advertisement -

The Nigerian Stock Exchange (NSE or The Exchange) is pleased to announce the upgrade of its Issuers’ Portal (X-Issuer) on Monday, 06 July 2020.  X-Issuer...
Read more

MTN Nigeria Plc on Thursday disclosed an insider dealing of 920,000 shares in line with the new Nigerian Stock Exchange (NSE) policy. In a statement...
Read more

The Nigerian Stock Exchange (NSE) is pleased to announce that it has reviewed the eligibility criteria for the NSE Pension Index (“The Index”) in...
Read more