Cotton Production in Nigeria: The Pathway to Recovery

In 2010, with a total production capacity of 602,440metric tons, Nigeria was Africa’s leading cotton producer and the 12th largest in the world.18 Cotton production in Nigeria has slumped significantly since then.

In 2017, it was the sixth-largest cotton-producing country in Africa and the 22nd globally. Nigeria’s cotton output nose-dived by 51.66% to 291,207metric tons in 2017 from its peak of 602,440metric tons in 2010. Export earnings from cotton in Nigeria also plunged significantly to $6.07 million in 2017 from close to $570million in 2010. The slump in cotton production in Nigeria is largely attributed to low yields due to poor quality seeds, pest damage and weak demand.

Recent initiatives to improve the contribution of the agricultural sector to economic growth in Nigeria have emphasized the importance of cotton production in stimulating the economy.

Cotton production in Nigeria has been linked to the productivity of the Nigerian textile industry. The demand for the commodity is usually driven by the demand for cotton lint by textile producers. The textile industry used to be the country’s largest consumer of cotton with over 180 textile mills. A sizable proportion of the Nigerian workforce at the time was also engaged in processing cotton into finished products. The influx of imported textile materials, however, has negatively affected the productivity of the industry. The number of textile mills dropped to 25, employing not more than 20,000 workers. Importation of textile products is estimated at approximately $4billion annually. Tahe revival of cotton production is imperative to stimulate the ailing textile industry.

Nigeria’s cotton cultivation is challenged by low yields from lack of high yielding cotton seeds and pest damage. The cotton crop is highly susceptible to pest infestation which negatively affects yields, thereby reducing farmers’ income. Policymakers in the country have admitted that low yields have contributed to the decline of productivity in the industry. This has resulted in a number of initiatives focused on providing farmers with quality cotton seeds to boost productivity. In 2015, the Raw Material Research and Development Council (RMRDC) offered cotton farmers about 5.82 metric tons of SAMCOT 7’ 8’ 9’ 10’ 11’ and 12’cotton seeds, in collaboration with the Institute of Agricultural Research (IAR), under the auspices of the National Cotton Association of Nigeria (NACOTAN). This
distribution yielded an approximately 5% uptick in cotton production in the country between 2015 and 2017.

Cotton is also a focused commodity under the Anchor Borrower Program initiative of the Central Bank of Nigeria. The program provides small scale farmers with necessary inputs in cash and in-kind services to enhance productivity. Most cotton farmers in Nigeria are typically small holdings farmers who cannot afford the cost of inputs. In May 2019, the governor of the CBN launched the distribution of cotton seeds to 150,000 cotton farmers in Katsina state, the leading cotton-producing state in the country.26 The farmers were also offered other inputs like fertilizers, pesticides, and knapsack sprayers. It is expected that the initiative will help to improve yields of cultivated cotton to four metric tons from the current one metric ton per hectare.

Despite the identified efforts, cotton production in Nigeria remains remarkably low compared to other African countries like Burkina Faso and Mali. The sustainability of current measures, aimed at reviving cotton production in Nigeria, is limited considering experiences in other cotton-producing countries. Pesticides increase the input cost of cotton farming which has implications on farmers’ profits and has also been found to be detrimental to the environment. Instead, the adoption of genetically modified cotton seeds, like Bt cotton, is associated with better pest control, high cotton yields and improved revenue. This has been found to be a common factor in the success stories of leading cotton-producing countries like India and Burkina Faso.

Burkina Faso is one of the countries that experienced a substantial boost in cotton production over the years. Cotton output in the country jumped 123.75% to 844,337 metric tons in 2017 from 377,364 metric tons in 2007.28 This is 65.51% more than Nigeria’s output in 2017. The country is the leading cotton-producing country in 2017, a position it has sustained for about a decade.29 The adoption of genetically modified cotton is widely acknowledged as the catalyst for the increases in Burkina Faso’s production output. The West African country adopted the Bt cotton in 2008 in a bid to address low yields from cotton cultivation due to pest invasion. The genetically modified pest-resistant crop helped to prevent the damaging effect of pests on cotton yields. 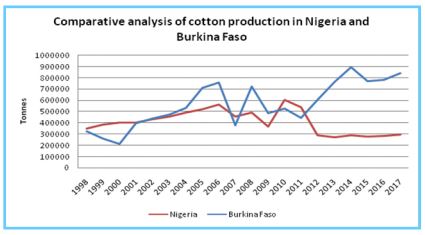 As in other cotton-producing countries, pest infestation was a major challenge in Burkina Faso until the introduction of the pest resistance Bt cotton in 2008. Rising input costs from increased expenses on pesticides and low income due to low yields from cultivated cotton prompted the introduction of the genetically modified cottonseed. Two Bt cotton varieties were approved in 2008 by the National Biosafety Agency for the commercial production of genetically modified cotton, after several field-testing efforts between 2003 and 2007. By 2014, the adoption of Bt cotton by cotton farmers had increased to 70% from 29% in 2009. The cultivation of Bt cotton reportedly led to a significant improvement in cotton yield and facilitated better income. Burkina Faso’s export earnings from cotton rose to $368.10million in 2017.

Cotton output in Burkina Faso plummeted after the decision to stop the use of genetically modified cotton in 2016. Cotton output fell by 8% in 2018 and is expected to remain suppressed in 2019. Concerns about the quality of cotton lint from cotton produced using the Bt cotton led to regulations by the government to halt the adoption of the genetically modified crop. Bt cotton was found to produce cotton lint with a shorter length compared to lint from cotton produced conventionally. The benefits of a higher yield from Bt adoption was therefore compromised by reduced quality of the cotton lint. However, conventional cotton production could also be prone to low-quality cotton lint from the detrimental effect of pest infestation on the cotton crop.

The low quality of the cotton lint was attributed to the fact that the genetically modified seed was not well developed to adapt to the climatic conditions of the country. Proper research and the development of genetically modified cotton seeds with adaptive traits to the domestic climatic conditions of Nigeria could make up for the limitation experienced by Burkina Faso. The Burkina government resorted to providing farmers with needed inputs including pesticides to make up for the shortfalls on cotton yield after the decision to stop the adoption of Bt cotton. The use of genetically modified pest-resistant cotton seeds has, however, proven more efficient in cotton pest control compared to pesticides. Cotton production in the country still lags what it was when the country adopted Bt cotton.

Mali is the second leading cotton-producing country in Africa and is set to take over from Burkina Faso as the leading cotton producer in Africa given its recent decline. Mali’s cotton output rose by 59.06% to 591,637 metric tons in 2017 from 242,239 metric tons in 2007. This is 50.78% more than Nigeria’s output in 2017. bout 40% of the rural populace in Mali depend on cotton, the country’s second-leading export earner after gold. Mali’s cotton export revenue was $134.64million in 2017, which is significantly higher than the $6.07million record in Nigeria for the same period. 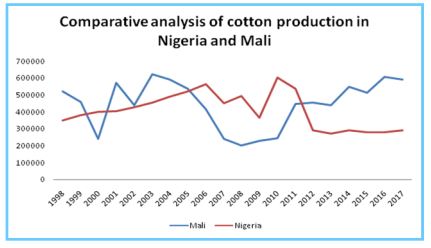 Unlike Burkina Faso, Mali has remained with the conventional method for its cotton production due to the cotton lint quality limitation of the Bt cotton. The winning strategy for cotton production in Mali has been a huge budgetary allocation for input subsidies. Mali allocates up to 18% of its national budget for subsidies; the cotton sector is its foremost beneficiary. Other strategies include improved access to land and increased producer prices to make up for shortfalls in global cotton prices. Nigeria needs to consider experiences in Mali and Burkina Faso as it looks to revive the nation’s cotton, textile and garment industries. Nigeria’s budgetary allocation to the agricultural sector hovers around 2% and would require a significant boost if the country wishes to achieve its growth desires for cotton production.

The use of genetically modified cotton has been widely acknowledged as an effective approach to pest control in cotton farming despite issues around the quality of the cotton lint. With proper field trials and the development of genetically modified crops that are adaptive to domestic climate, Bt cotton could improve cotton productivity and facilitate the production of high-quality cotton lint for textile production in the country. Nigeria could also intensify existing efforts to revive cotton production by allocating more funds for the development of the sector and providing inputs at a reduced price to farmers to encourage increase cotton cultivation.

Excerpts from the FDC Bi-Monthly Bulletin

According to the latest report by the National Bureau of Statistics (NBS), the textile industry accounted for c. 1.3% of Nigeria’s total import in...
Read more

The governor of the Central Bank of Nigeria, Godwin Emefiele has announced that the Apex bank has placed foreign exchange access restriction on the importation all...
Read more