The sort code is a number which usually identifies both the bank and the branch where an account is...
Read more
- Advertisement -
CardinalStone Research
On 20 August 2019, the Federal Government (FG) commenced the enforcement of partial closure of Nigeria’s land borders with Benin and Niger—to curtail persistent smuggling which threatened the administration’s drive to boost local production of staples and conserve foreign exchange reserves. Although smuggling occurs at most Nigerian land borders such as Idiroko, Ilaro, Jibia, and Maigatari, the illicit trade appears to be mainly perpetrated through the Seme border. Seven weeks on from the border closures, the deployment of security personnel has not only reduced illegal food imports but also limited unlawful exports of Premium Motor Spirit (PMS), according to PPPRA data.
FG may have to erase the huge incentive to smuggle PMS out of the country. PMS is trading at a significant discount of 59.7% in Nigeria (N145/litre), relative to the average in neighbouring West African countries (N360/litre). This huge discount, coupled with significantly porous border security and the opportunity to take advantage of existing free trade with border countries to make abnormal profits, had provided massive scope to illegally leverage petrol price arbitrage for many years. Since PMS became solely imported by the Nigerian National Petroleum Corporation (NNPC), smuggling aggravated the pressure on Nigeria’s finances via higher petrol importation and greater subsidy payments. To the point, Nigeria, to its detriment, may have inadvertently subsidized PMS supply to a few West African countries for more than 12 years. This inadvertent subsidy to a few West African countries may have added to under-recovery pressures emanating from higher global crude prices. Reflecting the impact of the aforementioned factors, Nigeria’s annual allocation to PMS subsidy rose to c.14.0% of overall FG expenditure in 2018 (whereas FG CAPEX accounted for 23.0% of overall expenditure) from a low 1.0% in 2016. According to NNPC and PPPRA, over N10.0 trillion was spent on subsidy between 2006 and 2018 while c.$10.9 billion (N1.8 trillion) was drawn from the Excess Crude Account (ECA) between 2011 and 2014 for the same purpose.
Low Nigerian PMS price ($/litre) creates scope for arbitrage profits – September 2019 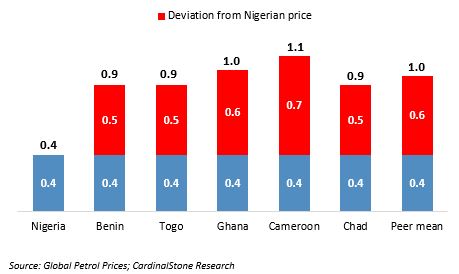