We review the drivers of the earnings below.

The Nigerian banking sector cost leader: GUARANTY’s GE was down 3.3% y/y to N326bnbn in 9M- 19 as growth remained constrained by weaker Interest Income number. Despite efforts to push credit which saw loan book expand by 9.2% to N1.3tn, the first time since Q1 2017, interest income remained reluctant, tumbling by 5.6%y/y. However, Non-Interest Income rose 2.8%y/y to N99.9bn but not enough to bolster topline. Net Interest Margin (NIM) improved from 9.2% in 9M-18 to 9.4% in 9M-19 as interest expense fell faster, down 23.4% to 51.3bn as such Cost-of-Funds (COF) moderated to 2.0% from 2.3% in H1-19. Notably, the unimpressive non-interest income performance is traceable to a 51.9% decline in net trading income which settled at N9.6bn (vs. N20.1bn in the prior year) as FX trading gain tumbled from N16.9bn to N4.0bn. Also, impairment charges jumped 59.% to N2.7bn. This may be linked to recent drive to aggressively boost credit to SMEs and the retail sector due to the new LDR regulation.

New LDR regulation spurs credit growth: We note the sharp increase in the net loans and advances (up 9.2% to N3.5tn). This is a deviation from prior quarters where the bank reported slower or negative loan growth. We highlight the role of the CBN’s regulation on minimum LDR to 60% as at Sept-19. Also, Financial Securities rose 6.8% to N741.2bn. In terms of Deposits, GUARANTY reported total deposit growth of 8.3% to N2.6tn, thus bringing Loan to Deposit Ratio to 54.0%, which is lower than the initial 60.0% minimum LDR rule. This provides an insight as to why a sum of N25.1bn was debited from the Bank by the CBN as a penalty for not meeting up with the LDR regulation. Other Asset Quality metrics, however, remained impressive, with NPL ratio settling at 5.6% (down from 7.3%
previously) and Cost of Risk at 0.2%. Capital Adequacy Ratio (CAR) stood at 23.6% and liquidity ratio came in at 36.8%, well above the regulatory minimum, respectively.

Outlook buttresses a BUY rating: We retain our BUY rating on GUARANTY at a current market price of N27/share. This is on the basis of the sustained operational efficiency of the bank. We expect GUARANTY to sustain its solid NIM and COF positioning due to its huge CASA deposit base. Also, the bottom-line will continue to be supported by the bank’s outstanding CIR ratio which ensured a net margin of 45% as of 9M-19 earnings. In terms of market valuation, PE and PB ratios came in at 4.1x and 1.2x, which is well below 3year historical averages of 5.8x and 1.7x, presenting an attractive entry point at the current price, ahead of FY-19 dividend (projected at N2.5) declaration. 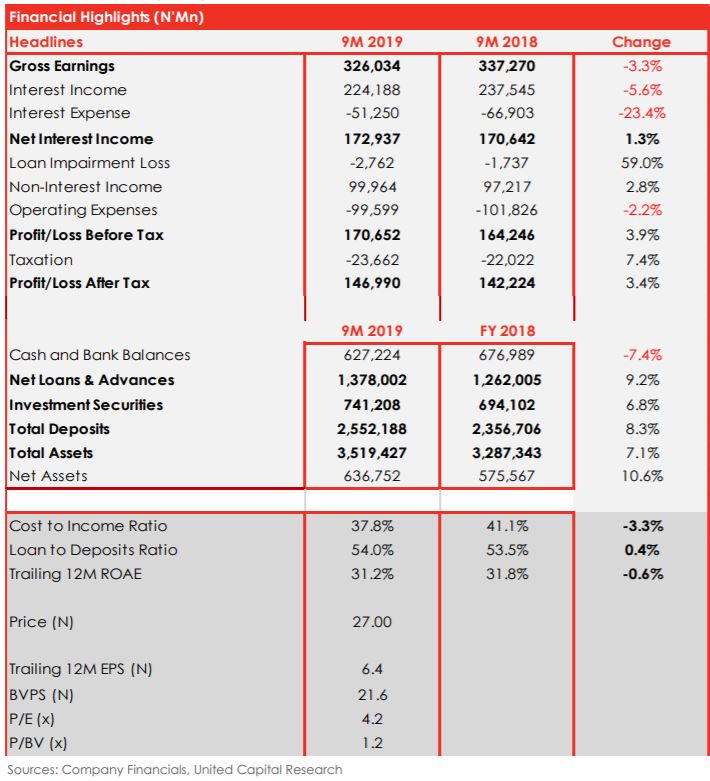 Guaranty Trust Bank PLC (GTBank) has ascended to the number one position as the Most Admired Financial Services Brand in Africa. Brand Africa which...
Read more

The Bank recently released its Q1 2020 unaudited financial report indicating a modest performance in earnings due to the drop in non-interest income. However,...
Read more
- Advertisement -