Does Work Make You Happy? Not So Much If You’re In Developed World

There’s a lot of focus these days on doing what you love, and happiness in the workplace.

It is, after all, where most people spend the majority of their day.

Buzzwords like work-life balance, flexible workplaces, and remote workers are some trends illustrating the evolving nature of the workplace as employers try to do more to retain workers amid growing scrutiny on how we work.

In an Ipsos Global Advisor survey across 28 countries, we asked more than 20,000 people how happy does having meaningful work/employment make them?

People around the world ranked having a meaningful job 13th out 29 possible sources of happiness. Things like health, living conditions, hobbies, safety, having meaning in life, friends and more money all came above having meaningful work.

The top 10 countries that ranked having meaningful work as source of happiness highest were all emerging markets – Colombia (90%), Peru and Mexico (89%), South Africa and Argentina (88%). 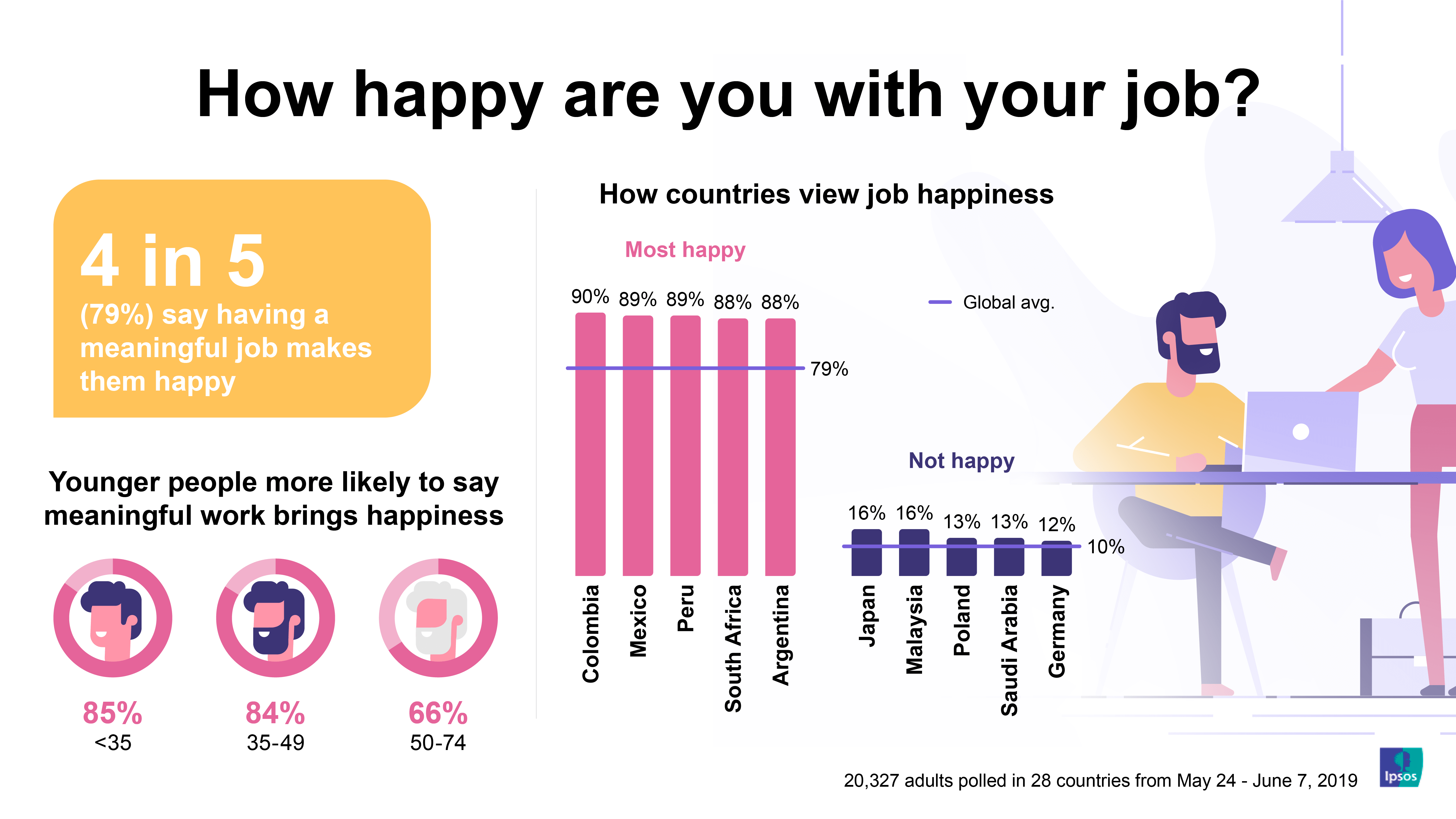 And the bottom 10 countries? All were developed economies – with the exception of Serbia (74%) at No. 8.

Sonja Lyubomirsky, Professor & Vice Chair of Psychology at University of California Riverside, said the findings may reflect Western nations’ preoccupation with happiness more than others, because people in these countries have the “luxury” to think about meaningful work since most of their basic needs are met.

“We don’t have to focus on meeting them [basic needs],” said Prof. Lyubomirsky. “So, if emerging nations are doing ‘better’ and meeting people’s basic needs  ̶  for shelter, safety, hunger, etc. ̶  more often, then their residents have the luxury to worry about whether their lives or jobs are meaningful.”

Stew Friedman, Wharton School of Business Professor at University of Pennsylvania, said more people in emerging markets could also be in jobs that don’t have much significance in their impact on employees’ lives.

“They could be in roles that don’t have opportunities for people to express their talents in ways that give them a sense of meaning and purpose in their work,” said Prof. Friedman, author of Total Leadership. “So, they are hungrier for it and it’s therefore more important to them.”

The findings also showed that younger people were more likely to rank having a meaningful job as a source of happiness compared to the older generation.

Prof. Lyubomirsky, author of The Myths of Happiness, said these findings reflect a lot of research that suggests millennials care more about work-life balance and having a meaningful job.

“Perhaps older folks did not emphasize selecting a meaningful job when they were starting out, and maybe now are regretting it,” she said.

Prof. Friedman, who founded the Wharton Work/Life Integration Project in 1991, adds that people don’t want to live the same kind of lives as their parents. They don’t want to devote themselves entirely to work.

“Now companies are competing with each other to demonstrate how friendly they are to the family and social lives of their employees,” said Prof. Friedman. “In many ways, younger people are demanding that they have a life beyond work and that work not be all-consuming.”

Globally, things like hobbies and interests and feeling that life has meaning (85%), feeling in control of their life and satisfaction with the direction their life is going (84%) and the amount of free time they have (82%) all ranked above having a meaningful job as a source of happiness.

Having a social impact

On the other hand, Prof. Friedman said that the results are consistent with his own research that shows young people are more interested in having a positive social impact through their work.

“This is not at all surprising and it’s a good thing, of course, as the world becomes more frightening and fragile on every dimension.  Certainly, younger people are more aware of all those issues because of greater access to information,” said Prof. Friedman.

“They are more aware of how important it is to have meaningful work to try to make the world a little bit better.”

During the current coronavirus pandemic, protecting employees and taking responsibility for society is the number one priority for the BMW Group. At the same...
Read more
- Advertisement -

During the current coronavirus pandemic, protecting employees and taking responsibility for society is the number one priority for the BMW Group. At the same...
Read more