Earlier, downstream giant, TOTAL, released its financial results for 9M19. In addition to regulatory constraints, idiosyncratic pressures dragged overall performance. Revenue declined by 2.2%y/y to N221.8bn while Cost of Sales increased (+0.4%y/y) marginally. In the same fashion, OPEX & Finance costs increased significantly, weakening bottom-line figures. As a result, loss before and after taxes for the period were -N117.0mn and -N204.8mn respectively, with a negative EPS of -N0.6/share.

Highlights of the results are discussed below in more detail.

A doleful story of lower revenue and ballooning cost items

For the period under review, TOTAL recorded a 2.2% y/y drop in its revenue, as declines in General (-15.2%y/y) and Aviation (-2.8%y/y) segments outweighed increased inflows from the Network (+2.5%y/y) segment. The topline figure settled at N221.8bn, with growth in Lubricant (+4.2%y/y) sales offset by a decrease in Petroleum Products (-3.5%y/y). Constrained by the consequences of operating in a market where petrol prices are capped, Cost of Sales remained sticky (+0.4%y/y), resulting in a 19.0% decline in Gross profit to N25.1bn. Additionally, OPEX continued to be a burning hole in TOTAL’s pocket, as Administrative expenses increased 22.7%y/y to N17.5bn, driven by technical assistance and management fees. With little financial buffer from Other Income (-29.9%y/y to N1.4bn), Operating profit tumbled 59.7% to N5.7bn.

In line with views expressed in our 2019 Nigeria Oil & Gas Sector Update, the overkill of short-term borrowing did more harm, than good. With Operating margin strained to 2.6% (vs 4.9% average in the last 3 years), a 103.3% surge in Finance costs to N6.1bn milked what was left of operating profit. Consequently, TOTAL reported a record Loss before Tax of N117mn, a huge drop from N7.7bn in 9M-18, while Loss after Tax settled at N204.8mn.

In terms of working capital management, a couple of highlights gave us cause for concern. TOTAL’s current ratio, which measures the ability of the company’s current assets to settle current liabilities, came in at 0.9x – below the industry average of 1.1x. The quick ratio, which is a more stringent measure of liquidity, was 0.3x, compared to the industry average of 0.5x. This clearly reflects a problem in working capital management. Another sore point was the increase in Bank Overdrafts (+107.6% YTD to N45.9bn) which caused total Borrowings to soar by 57.4% YTD to N53.9bn, fueling the growth we saw in Finance costs. In addition to recording a Loss after Tax, the performance of operating Cash flows was sour, as Net Cash from operating activities was negative at -N7.4bn, as operational outflows outweighed inflows. Consequently, Cash & Cash equivalents for the period was negative at -N42.3bn.

TOTAL rated a SELL at the current Price

Despite TOTAL’s dominant position in the downstream segment, with a huge revenue size and a wide distribution network, a few issues cast doubt on its near-term profitability. We expect the company to continue to drive growth in Lubricant sales which contribute 18.1% to revenue, however, the performance of the petroleum products (PMS, AGO, DPK, LPFO & ATK) is unlikely to improve due to regulatory cap on PMS prices. Additionally, the borrowing of expensive short-term funds, coupled with elevated OPEX will continue to weigh on profitability. Elsewhere, negative cash balance signals the need to refinance short term borrowings, majorly from the banks, at lower rates in the debt capital market to boost profitability. Thus, cutting down high operating costs and refinancing borrowing at lower costs, measure to be considered going forward, to restore profitability. In the medium to long-term, we do not dispute the possibility of soft cushions from the takeoff of Dangote Refinery, which could relieve some cost pressures across the industry. That said, imminent deregulation of Petrol prices may boost revenue in the medium to long run. With the above considered, we retain our Year-end Target price of N110.5, which translates to a -10.3% downside at the current price of 123.2. Hence, we downgrade our previous HOLD rating to a SELL rating on the TOTAL. 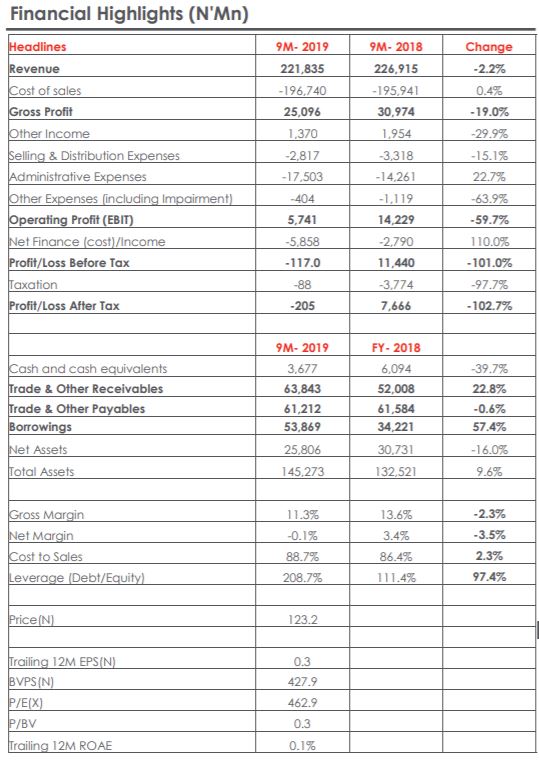 In line with Rule 1.1 of the Rules Relating to Board Meetings and General Meetings of Issuers, Cornerstone Insurance PLC (“The Company”) wishes to...
Read more
Business & Economy