A Map Of Inequality In Countries

Social and economic inequality between and within regions in countries is rising in many advanced economies and is now at the forefront of the policy debate because of perceptions that some people and places have been left behind. Changes in global trade and technology have shifted jobs and industries on the map, but the economic gains within countries are not well shared.

One might think the solution is for people to move in search of better jobs and lives. But people find it harder to move to booming cities with more jobs like Washington D.C., San Francisco or London in part because they can’t afford to live there, or because they do not have the right skills required for higher-paying jobs.

Our recent paper studies regional inequality in 20 advanced economies, including the United States, Canada, Italy and Germany. We find that regional disparities in income are large, persistent, and increasing over time. 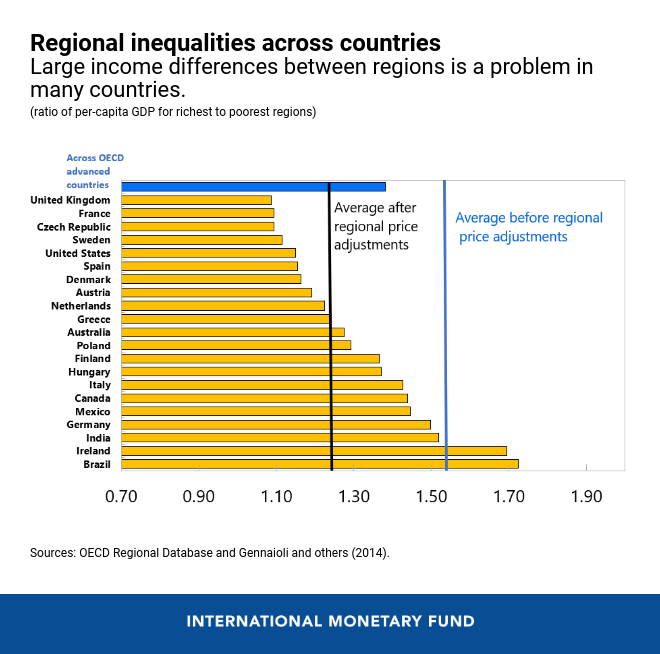 This is where government policies on taxes and spending may require a rethink, so countries can better tackle inequality between regions. Policies could help people upgrade their skills for better-paying jobs and help redevelop communities to create local jobs.

The disparity of income between regions has been large in many advanced countries. One may think that it is primarily due to differences in regional prices—for example, $100 can buy more goods and services in Missouri than in New Jersey. But regional disparity remains sizeable even after we consider regional price differences. A disconcerting fact is that regions with low-income levels tend to have less access to healthcare, lower education levels, and higher unemployment rates.

More importantly, the disparity of income between regions is also persistent and has risen over the past 15 years, contributing to inequality. Regions that have fallen behind—those with high unemployment rates—have on average a 70 per cent chance of remaining behind. The chance of lagging behind can be even higher than the average in some countries, such as in Italy and Canada. Instead of catching up, regions that lagged in these countries grew at a slower rate—by as much as 1 percentage point of GDP over three years.

You may think that people can simply move in search of better jobs in high-income areas. But based on micro-data for individual households, we find that the higher average income in the more prosperous regions is more often offset by the high cost of living. People find it harder to move because housing costs are higher and high-paying jobs are less available for low-skilled workers in wealthy regions. For example, over the last decade, our estimates suggest that the net benefits of moving to higher-income regions have fallen by 25 to 35 per cent in Spain and in the United States for low-income households.

Read Also:  What do 8,000 consumers in 22 countries think about the future of payments? 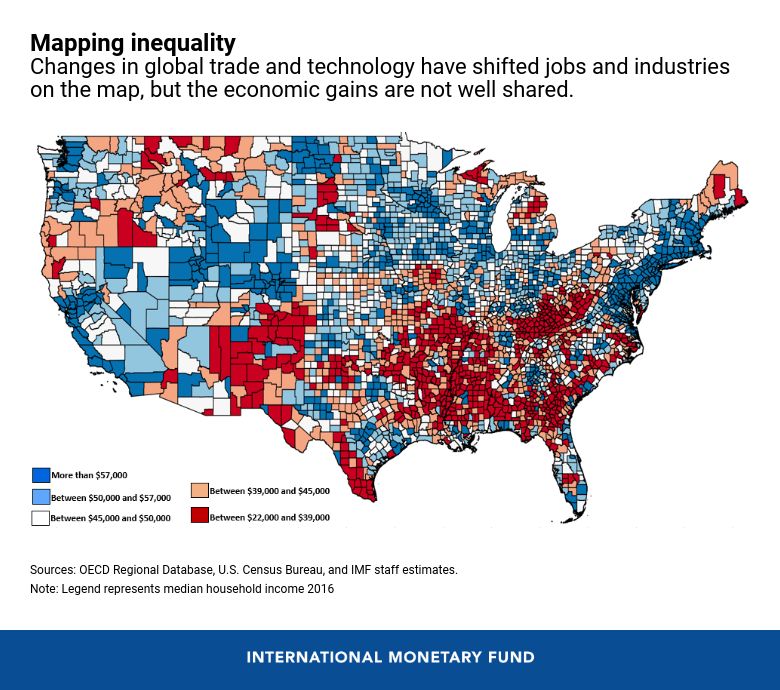 Our paper provides options for policymakers trying to decide whether, when, and for who to use targeted, place-based policies to tackle regional inequality. Those policies target individuals and firms in selected regions through subsidies, grants, or public investment. Examples include the European structural and investment funds or enterprises zones in the United States.

Geographically-targeted policies can complement existing social transfers such as unemployment insurance.  This is more successful if recipients are highly concentrated in lagging regions of a country, such as in Mexico and the United States, and/or if countries find it hard to target selected individuals nationwide, such as through means-testing. Under these circumstances, geographically-targeted policies such as those promoting jobs in lagging regions can have a stronger impact and can complement existing measures.

Each country needs to decide which is the appropriate level of government, be it local, state or federal, to carry out the strategies. The level of fiscal autonomy in part depends on whether the country has a federal or unitary system and, more broadly, on the nature of intergovernmental fiscal arrangements.

For example, a high degree of revenue and spending decentralization could imply that subnational governments have more control and capacity to design and implement geographically-targeted policies. Coordination is key among government levels given shared responsibilities.

As a general principle, the central government usually takes the lead on policy design, while subnational governments are more involved in the implementation, as they know best the local needs and preferences. In federal or highly decentralized countries such as in the United States, subnational governments have greater autonomy to determine the income and property tax rates and spending on education and healthcare. Other considerations would include the existing system of intergovernmental transfers and the technical capacity of subnational governments.

Regional dimensions are key elements when considering the facts and policies on income inequality. In any country, policies that target specific regions can complement conventional social transfers to mitigate inequality between regions.

As labour markets around the world continue to reel from the COVID-19 crisis, ILO Director-General, Guy Ryder, has called for sustained social spending as well...
Read more

Extraordinary times call for extraordinary measures, and the IMF has stepped up to the Covid-19 challenge. But will its $1tn money pot be enough...
Read more
- Advertisement -