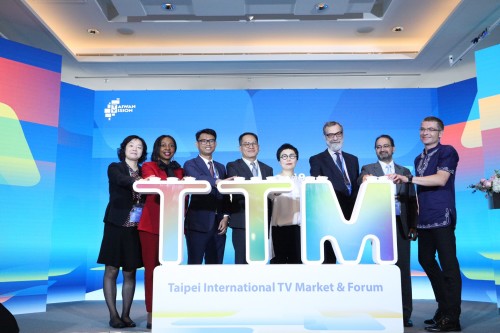 Peng Chun-heng, Deputy Minister of Ministry of Culture and other distinguished guests are here to start the event.

Peng Chun-heng, Deputy Minister of Ministry
of Culture; Hsu Yi-chun, Director General of Bureau of Audiovisual and Music
lndustry Development, Ministry of Culture; Ting Hsiao-ching, Chairperson of
Taiwan Creative Content Agency, join hands to kick off the event, which
showcases the best of Taiwan’s TV products and spurs international cooperation
and sales, and the event will run through November 14.

In remarks made at the opening ceremony,
Deputy Minister Peng said that the Taipei International TV Market & Forum is
an excellent place to take stock of the industry, share experiences and
technologies, develop international cooperation, and together create a
healthier environment for cultural industries. He also emphasized that The
Ministry of Culture has invested heavily over the past few years in creating an
environment conducive to the growth of cultural industries. As part of this, it
has offered awards and funding for the publishing of novels, creation of
scripts, establishment of the Taiwan Comic Base, program production,
post-production and special effects, culture-related technology, personnel
training, overseas marketing, and script translations and dubbing. These grants
and guidance programs have laid the groundwork for creation, and greatly
increased the nation’s capacity to produce original content. Moreover, they
have opened new pathways for derivative content to reach the marketplace.

This year, in order to expand the scope of
activities and increase business with rising markets, there will be 84 buyers
from 20 nations and regions to join the event including Brazil, Burma,
Cambodia, Colombia, France, Great Britain, Hong Kong, India, Indonesia, Iran,
Japan, Korea, Malaysia, Philippines, Russia, Singapore, Spain, Thailand, the
United States, and Vietnam.

This year among the guests of honor are GYAO
and Hulu Japan, both from Japan, and the sponsors are proud to announce the
addition of the Southeast Asia Exhibition Area, where related nations will host
booths.

In addition to rights trading meetings, three
International TV Forums will be held: Bringing Taiwan’s Original Content to the
Global Market, the TV/OTT Effect on Drama Productions; and Content Analytics:
Functions and Applications. At these, experts from Taiwan and other nations will
bring their insights and perspectives on the latest international trends,
successful cases, and key operational milestones. These events will spur new
understandings among Taiwan’s industry players, and spur the greater growth of
this sector. Two pitching sessions will be held to allow Taiwan’s content
creators the opportunity to meet with investors from Taiwan and all over the
world.

At a tea party during the opening ceremony,
Deputy Minister Peng will present the 2019 Awards for Television Dramas
Broadcast Overseas. For its success in having The Perfect Match broadcast all over the world– including Hong
Kong, Macao, Malaysia, Europe, and the Americas–Sanlih E-Television Co., Ltd.
will be presented with the Best Effective Reach on an Overseas Platform Award.
The series has also made inroads in such historically closed markets as Central
Asian nations, Japan, South Korea, and Thailand. Choco Media Co., Ltd.,
meanwhile, will be honored with the Best Overseas Creativity Marketing Award
for HIStory Seasons One and Two. This
series is noteworthy for having used smart marketing strategies over new media
to break new ground with audiences. It has been acclaimed by young people all
over the world, enjoying record views and clicks online.

Taiwan Television Enterprise Ltd. will be
honored with the Best Overseas Production Award for its series Prince William. This program was a major
hit among Mandarin-speakers in the Americas and New Southbound Policy partner
countries. Each award recipient will also be granted NT$1 million.

Deputy Minister Peng emphasized that Taiwan
is a land of many moving stories that can serve as inspiration for TV and film
productions. Taiwan is an excellent partner for the development of the
international film/TV market. Working together, Taiwan and foreign enterprises can
make Taiwan globally renowned as a producer of fine TV programming. The TAICCA, founded in May, will work with
the Ministry of Culture to create an environment that is suitable for the
development of cultural content industries. The agency will work to establish a “national team” of noteworthy
enterprises by joining government and private resources in support of film/TV,
pop music, illustrated publications, digital publishing, games, fashion, and
culture-related technology. Assistance will be provided concerning creation, distribution,
and international sale of these products. The main thrusts of TAICCA’s efforts will be content
development, creation of culture-related technology, and building a funding
system for cultural works. To achieve its end of being a bridge between the
government and the private sector, it will conduct surveys, train personnel,
make investments, and forge international alliances.

The Taipei International TV Market &
Forum is a much-anticipated event for the TV industry for both Taiwanese and
foreign participants. Over three days, in addition to the market, international
forums, pitching meetings, and meetings with government film commissions will
be held. A new media tech area will also be featured this year. Aside from
these events, the TV Screenwriting Award and Taiwan Literature Award will be
presented. More, a special tea party for XMediaMatch-Excerpts from “From Book
to Screen” Titles, as well as XMediaMatch “From Book to Screen” business matching
events will be held. According to the Bureau of Audiovisual and Music Industry
Development, the events will give international buyers, local investors, and
content creators the chance to better understand Taiwan’s literature,
animation, and TV content and spur international derivative rights trading, business
matching, and expanded cooperation.