In a thrilling, but energy-sapping mental duel last weekend, representatives of Lagos and Ogun States shrugged off all challenges to emerge victorious in the finals of season 5 of the Cowbellpedia Secondary Schools Mathematics Television Quiz Show sponsored by Cowbell Milk, the flagship brand of Promasidor Nigeria Limited.

In an electrifying final battle of the Junior category, Michael Enehizena of The Scholars Universal Secondary School, Ota, Ogun State put the crown beyond the reach of his fellow contestants by garnering 125 points at the end of the two-round encounter.

Enehizena who also had a perfect score in the qualifying examination in March, pushed Abdul-Quayum Alli, of Ota Total Academy, Ota, Ogun State, who had 115 points and David Charles of Graceland International Secondary School, Port Harcourt, Rivers State, who scored 110 points to the second and third place respectively. 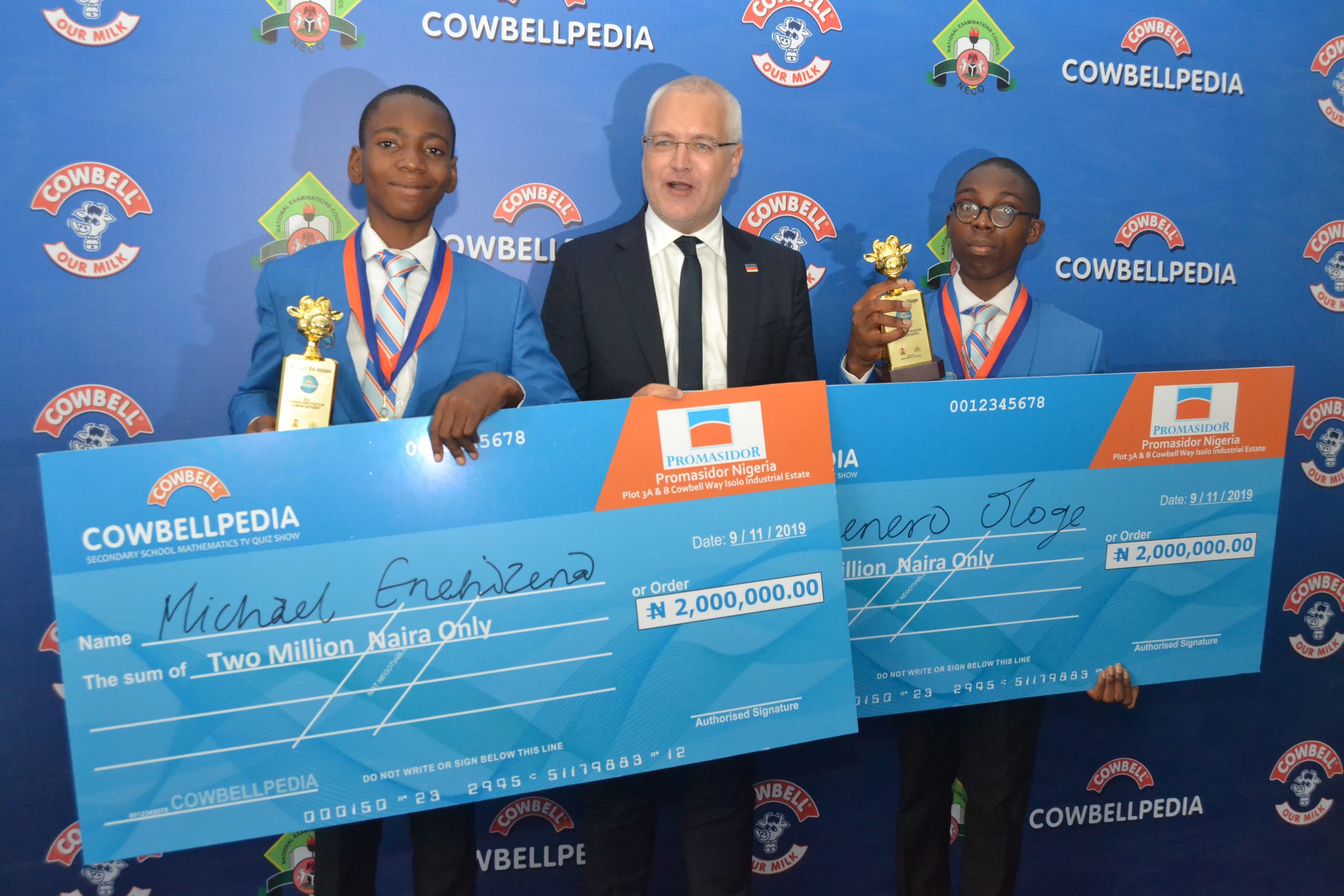 Ebube Okafor of Saint Francis Catholic Secondary School, Idimu, Lagos State and Alonge Esmond of The Scholars Universal Secondary School, Ota, Ogun State had earlier crashed out after the first 12 questions in the first round, while Ernest Ofoama of Makurdi International School, Makurdi, Benue State, fell after a tie-breaker at the end of first round.

The 14-year old Enehizena who dedicated his victory to God and his parents explained that he ‘practised hard and prayed harder’ during the competition. “I am always very excited about the way the Cowbellpedia winners are celebrated. We see them on the television screen and read about them and their schools in the papers and online. I am excited and grateful to God that it is my turn to be celebrated now,” Enehizena who aspires to study Mechanical Engineering told journalists outside the studio.

Read Also:  Why Mathematics Is Critical To Economic Development

His teacher, Daniel Ogunleye commended him for his wonderful performance and commended Promasidor for exposing his great talent through the Cowbellpedia initiative.

An excited Ologe told journalists outside the studio that “it is nice and wonderful to be the champion.” A first timer in the Cowbellpedia Competition, Ologe revealed that he watched many episodes of the competition to sharpen his preparation ahead of the contest. “I did not participate in the Junior edition, but I was determined to make an impact and so, I practised hard,” the 15-year old said.

For their efforts, the two champions got N2 million each and an all-expense-paid education excursion outside the country.

In his chat with journalists at the event, Managing Director of Promasidor Nigerian Limited, Mr Einarsson Anderson reiterated the commitment of the company towards education, saying it is the most important investment for the future of the children of Nigeria.

He saluted the finalists for their excellent performance while also assuring that Promasidor will continue to support the academic development of Nigerian children.

HAMBURG, GERMANY - NEWSAKTUELL - 9 July 2020 - For 24 years the SPREE FLUG has been flying passengers and freight throughout Europe in commercial air traffic. Its strengths are...
Read more
MEDIA OUTREACH

The Lagos State Government said that it has identified Badagry and Epe as the proposed locations for the establishment of craft villages designed to...
Read more

Victoria, N’djamena and Lagos are Africa’s most expensive cities

According to Mercer's 2020 Cost of Living Survey, the majority of African countries have risen in ranking in terms of expenses and cost of...
Read more

Poised to radically create a further niche for itself while strengthening its leadership position in the competitive Nigerian Media Market, MAX FM, a leading...
Read more