Oil Prices: At The Mercy Of Geopolitical Tensions

In 2019, crude oil prices responded to multiple factors affecting supply and demand. This was as swings in crude oil inventories, OPEC+ production cuts, escalating trade tensions and a synchronized slowdown had to push and pull effects on the global commodity. As a result, Brent crude oil prices averaged $64.2/b in 2019, down 10.5% y/y.

Barely three days into 2020, geopolitics took the centre stage, as tensions between U.S. and Iran escalated, following a U.S. airstrike which killed an Iranian General. With the fear of oil assets being caught in the web of inter-country conflict, possible attacks on Middle Eastern U.S. allies or disruption at the Strait of Hormuz, crude prices climbed above $70.0/b levels before settling at $67.8/b. While tensions in the Middle East serve as a short-term positive shock, the recent OPEC+ production cuts give us reasons to believe that oil prices will average or hover around $60-$65/b in 2020 (with a greater probability lying in the mid-value of the band). 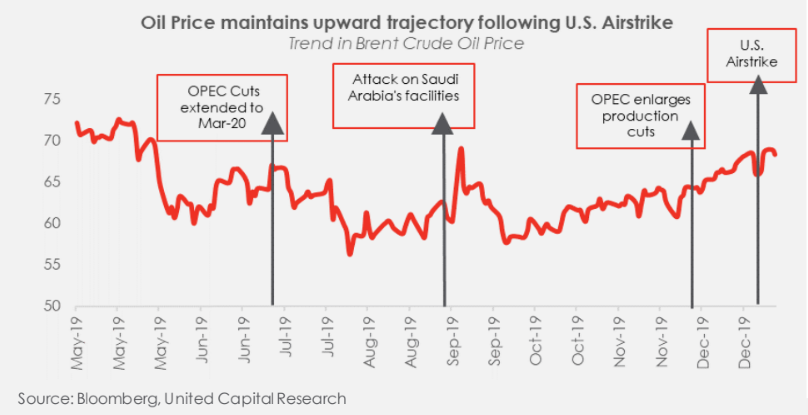 On the demand side, decelerating growth in key demand markets (China & India) remains a key cause for concern. Also, with higher oil prices, shale producers are encouraged to pump up supply, creating a potential glut. However, we could see increased tensions and actions that will keep prices at a significantly profitable level.

Uptick in oil price: Is a recovery in view?

Brent futures are up 10% since last week, driven by the news of a vaccine following a decline in global oil demand since the...
Read more

Oil Back Down As COVID Cases Surge

Oil prices extended losses to about three per cent on Friday after U.S. President Donald Trump said he has tested positive for COVID-19. Agreement on...
Read more
- Advertisement -