Global debt hit all-time high of nearly $253 trillion in Q3 2019: Total debt across the household, government, financial and non-financial corporate sectors surged by some $9 trillion in the first three quarters of 2019 (Table 1). By sector, general government (+$3.5 trillion) and non-financial corporates (+$3 trillion) saw the biggest increases, helping bring the overall global debt-to-GDP ratio to a fresh high of over 322%. 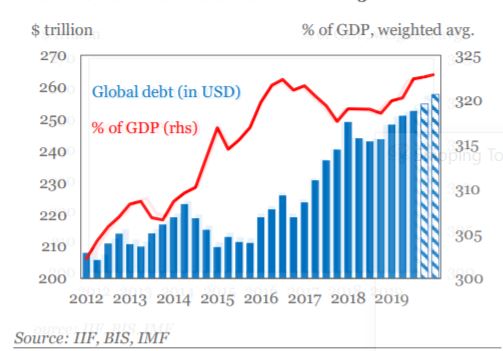 Diminishing returns on new debt: Preliminary data for full-year 2019 suggest that the global debt-to-GDP ratio grew at its fastest pace since 2016—even as global growth fell to its slowest pace since the 2008-2009 financial crisis.

EM debt has risen more than twofold since 2010, to $72 trillion: The surge has been driven mainly by the sharp buildup in non-financial corporate debt (up to $20 trillion to over $31 trillion). This is a contrast to mature markets, where the government sector has been the biggest driver. The ex-financial sector, the total EM debt-to-GDP ratio reached an all-time high of 187%, ranging from 53% in Nigeria to over 365% in Hong Kong. FX debt in EMs soared to $8.3 trillion in Q3 2019—$4 trillion higher than a decade ago. Dollar debt accounts for over 85% of this increase.

China’s debt is fast approaching 310% of GDP—one of the highest in emerging markets: Following a marked slowdown in 2017/18 during the big push for deleveraging, debt accumulation in China picked up again in 2019, notably in the non-financial corporate sector. Government debt grew at its fastest annual pace since 2009. Household debt and
general government debt is now at all-time highs of 55% of GDP.

At the end of the two-day bi-monthly MPC meeting, all policy levers were maintained following a unanimous vote of all members of the committee. ...
Read more
Entertainment & Lifestyle

The virtual event is dedicated to the youth of Africa and will showcase the best of African talent, culture, and music to a global...
Read more
- Advertisement -

Official data published by the National Bureau of Statistics (NBS) last week shows that Nigeria has formally moved into a technical recession, following its...
Read more