Co-leaders Barcelona and Real Madrid both face tough tasks on the road during a LaLiga weekend packed with local derbi rivalries.

After some shock results elsewhere last time out, FC. Barcelona and Real Madrid remain together at the top of the table, but now with an eight-point lead over the chasing pack as the second half of the 2019/20 title race hots up. 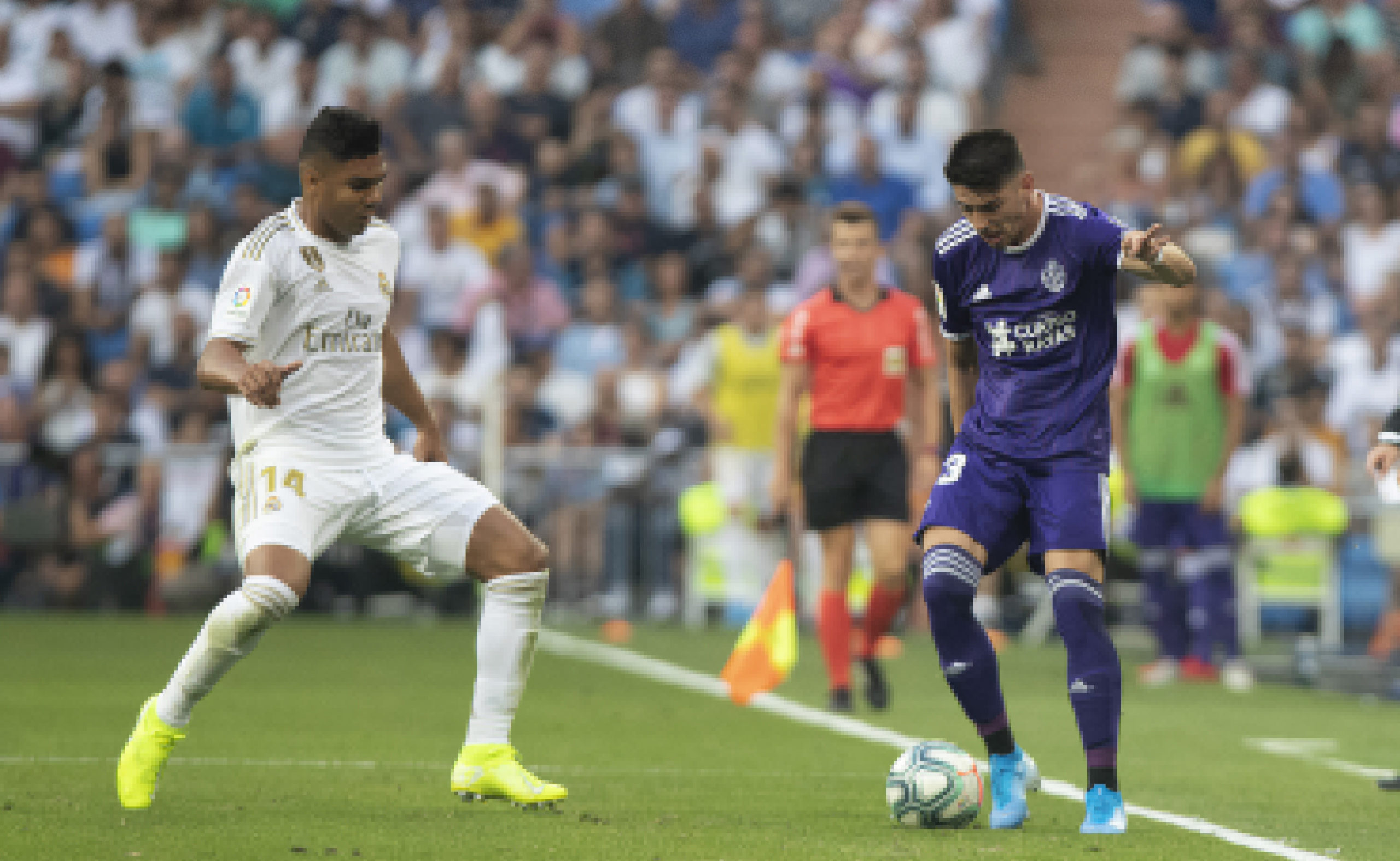 Barça are first in action this weekend, travelling down the Mediterranean coast to visit Valencia for a fixture which has finished 1-1 in three of the last four years. New Blaugrana coach Quique Setien will want to continue what has been a decent start at the Camp Nou, while Los Che coach Albert Celades faces the club where he began his playing career and won two LaLiga titles in the 1990s. 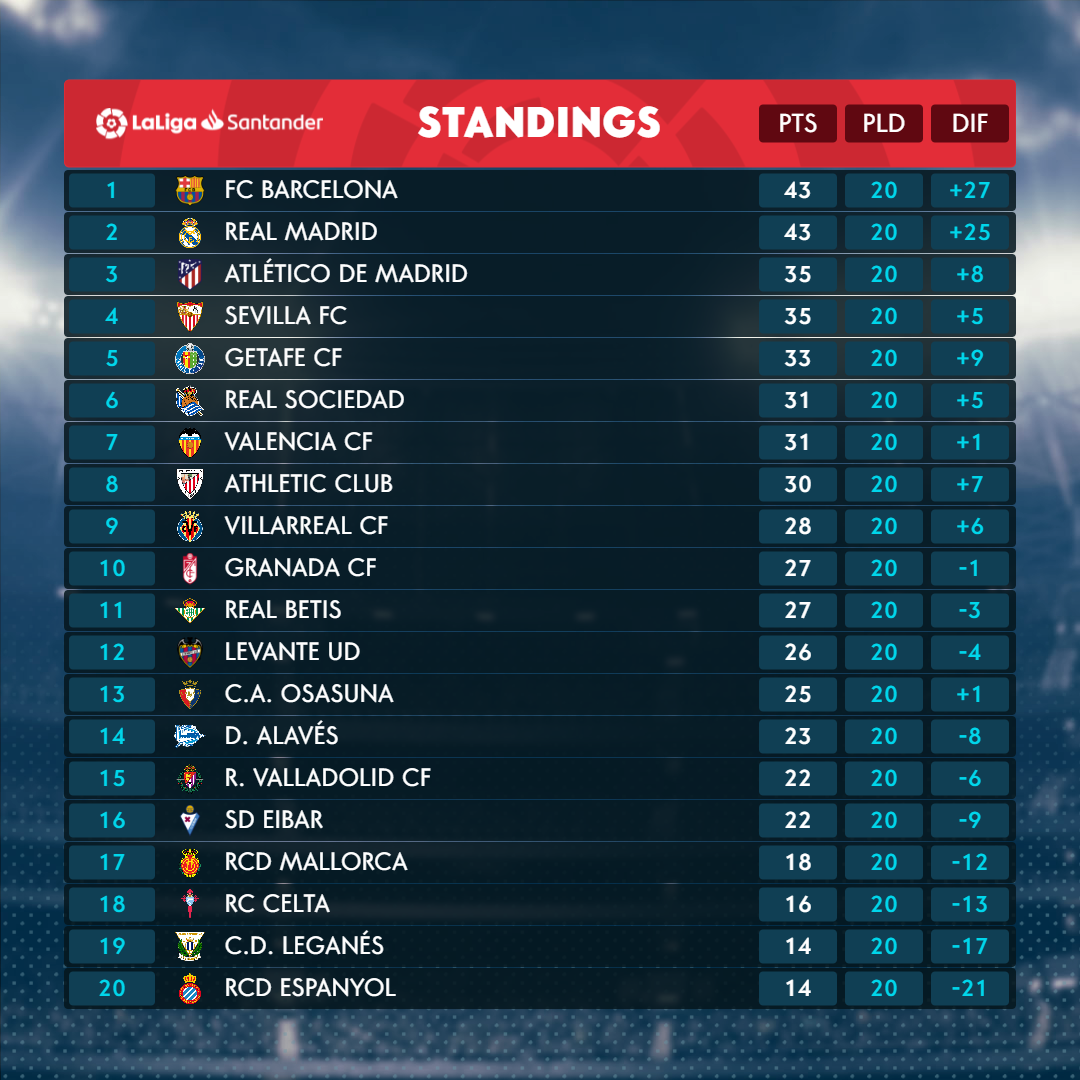 Zinedine Zidane’s in-form Real Madrid will also be tested on Sunday evening at Real Valladolid – who have lost just once at their Jose Zorrilla stadium so far this season. Last year’s clash between the Castilian neighbours was also super dramatic – Valladolid dominated the first half and could have been three goals up before Madrid pulled away to win 4-1 in the end. 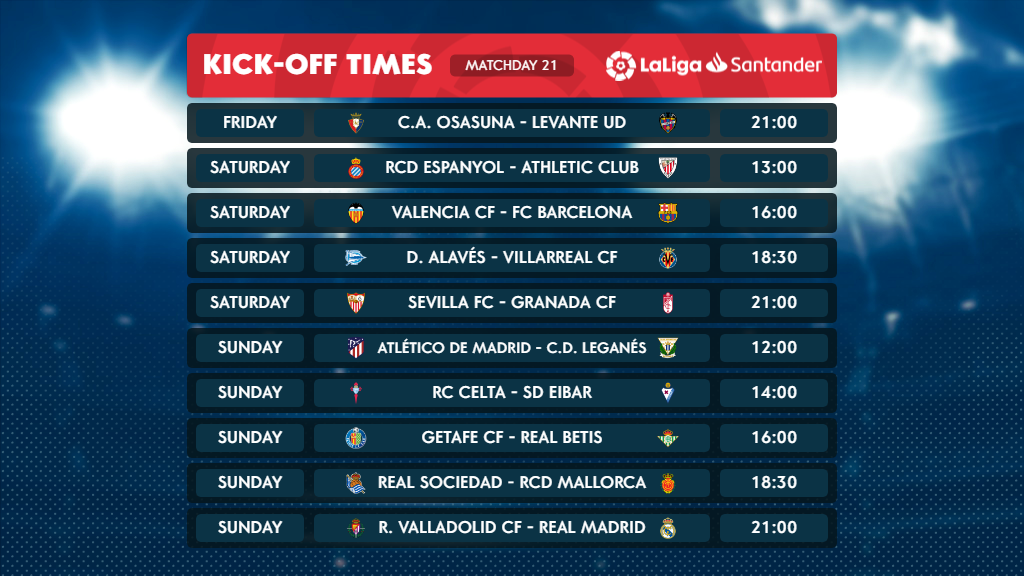 LaLiga Santander’s 21st round of games kicks off on Friday evening with Osasuna hosting Levante – a feisty encounter could be on the cards as a player has been sent off in each of their last three LaLiga meetings.

Saturday starts with Espanyol hosting Athletic Bilbao – the Catalan team have taken four points from their first two games under new coach Abelardo Fernandez, while the Basques have won just one of 10 away outings so far in LaLiga Santander 2019/20.

Abelardo’s former club Alaves host Villarreal later on Saturday afternoon. Alaves historically have an excellent record against Villarreal, but the Yellow Submarine won 4-1 in his season’s first meeting back in September.

Saturday closes with Sevilla hosting Granada in a tasty Andalusian derby in the province’s capital. The hosts have won five of the last six in this fixture, while Granada has lost their last six LaLiga away games, but the form book often goes out the window on occasions like this.

There’s yet another local clash in Sunday’s early game, with Leganes making the short trip to Atletico Madrid. Both teams had difficulties last weekend – ‘Lega’ lost at home to even closer neighbours Getafe, while Atletico’s title challenge faltered with a first-ever LaLiga defeat at Eibar.

Eibar, therefore, travels in a good mood for their game Sunday afternoon at Celta Vigo – with the Galicians themselves also having been lifted by last weekend’s creditable draw at Athletic Bilbao.

Commanding victories last time out mean both Getafe and Real Betis will be confident ahead of Sunday evening’s meeting at the Coliseum Alfonso Perez – their last meeting back in September saw Betis hold out for a 1-1 draw despite finishing with just 9 players.

Sunday also gives Real Sociedad a chance to bounce back from last weekend’s defeat at Betis, but RCD. Mallorca will head to San Sebastian in fine form after the Balearic Islanders moved out of the drop zone with their 4-1 win over Valencia.

...FC Barcelona Leads With A €275M Loss The coronavirus lockdown has had a massive impact on the entire football clubs. Despite broadcasters, club owners, and...
Read more