Much Ado about a Bag of Rice?

Towards the end of 2019, developments in the Nigerian rice market made headlines. This was as the government ordered the complete closure of all land borders, causing the price of rice to skyrocket. This was expected, given the significant importance of the commodity (Nigeria’s third-most consumed staple food according to Ricepedia), and the huge domestic supply deficit (averaged 43.5% from 2007-2018) which had been augmented by the importation/smuggling of rice from cheaper and better quality foreign sources. 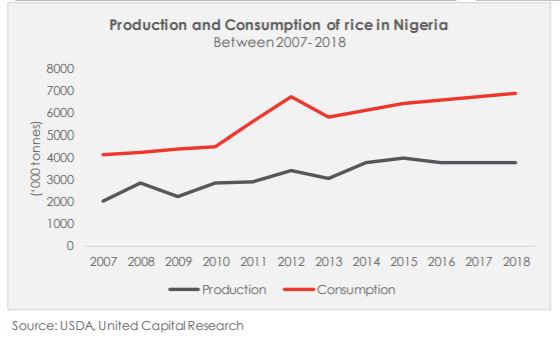 Looking back in time, we highlight the fact that the government’s restriction on importation of rice in 2015, earlier resulted in a 115.0% surge in price between 2014-2018. However, large scale smuggling resumed shortly after, amid porous borders. Seeing as history has repeated itself, the border closure was a more stringent approach, as local consumers continued to show a preference for the imported substitute.

With a forward view, while the border closure is expected to end by Jan 31st, 2020, the re-opening is still uncertain, as Nigeria is yet to reach a concrete deal with its neighbouring countries. As such, we expect investments in the rice sector to increase, as operators mobilize finance required to ramp up production in a bid to close the supply shortfall created and take advantage of the current high prices. Also, investments will also move towards curbing supply shortages in foods such as frozen foods, palm oil as well as other imported food items, affected by the recent border crisis.

Rising Food Prices: Should the border closure be reversed?

The average price of selected major food items in Nigeria, such as yam, rice, tomatoes, and eggs, increased in September 2020 the National Bureau...
Read more

The average price of major food items in Nigeria like yam, rice, tomatoes and eggs increased in June, the National Bureau of Statistics (NBS) has said. The...
Read more
- Advertisement -