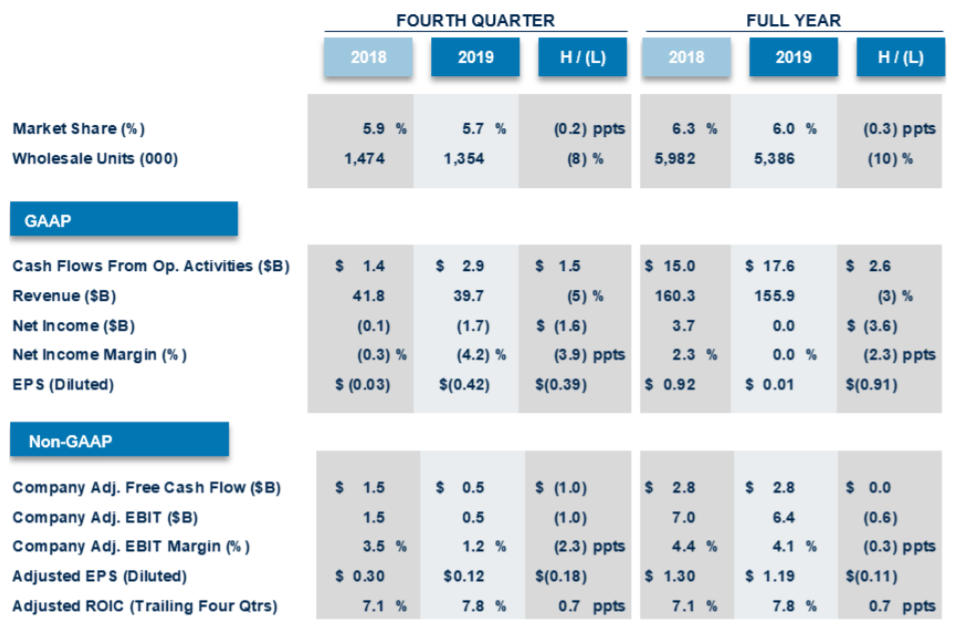 Fourth-quarter adjusted free cash flow was $498 million, down 67 percent. The company  reported a Q4 net loss of $1.7 billion, or negative 42 cents per share, which includes a  previously disclosed $2.2 billion pension and OPEB remeasurement loss . Adjusted earnings  before interest and taxes (EBIT) were $485 million, down 67 percent, with improved results in  China and Europe more than offset by a decline in North America. Revenue was $39.7 billion,  down 5 percent.

Ford Credit had an exceptional year, posting its best results in nine years, with $3 billion in  earnings before taxes.

“We made great strategic progress this past year with a fundamental redesign of Ford that is  setting us up to compete and win in this emerging era of Smart Vehicles for a Smart World –  with great products, services and long-term value,” said Jim Hackett, Ford president and chief  executive officer.

”Financially, the company’s 2019 performance was short of our original expectations, mostly  because our operational execution – which we usually do very well – wasn’t nearly good  enough. We recognize, take accountability for and have made changes because of this.”

Among 2019 strategic highlights were the November reveal of the Mustang Ma ch-E, an exciting,  zero-emissions battery-electric vehicle that will be digitally connected, enabling constant  improvement through real-time over-the-air updates. Additionally, Ford entered strategic  agreements and partnerships around the world – with VW, Rivian and Mahindra — to  complement and accelerate its own capabilities in autonomous and electric vehicles and in  emerging and emerged markets.

Operationally, Global Redesign actions during 2019 included decisive moves to both reinforce  strengths and address under-performing parts of the businesses. As examples:

According to Ford, it is too early to estimate implications of the coronavirus outbreak on its  business. Excluding any possible effects from the issue, for full-year 2020, the company  anticipates:

In the first quarter, Ford expects adjusted EBIT to be down more than $1.1 billion from Q1 2019  as a result of the continuation of higher warranty costs seen during the second half of 2019,  lower vehicle volumes, lower results from Ford Credit, and higher investment in Mobility. The  company expects its Q1 adjusted effective tax rate to be at the high end of its full-year guidance  range.

Ford’s guidance assumes no material change in the current economic environment, including  commodities, foreign exchange and tariffs. Actual results could differ materially from guidance  due to risks, uncertainties and other factors, including those detailed in the company’s  Cautionary Note on Forward Looking Statements.

The company will report first-quarter 2020 financial results on April 28. Ford said it will  announce the date of each subsequent earnings release in conjunction with results for current  quarter.

Dec. 31, 2020 – Ford Motor Company and Mahindra & Mahindra have mutually and amicably determined they will not complete a previously announced automotive...
Read more
- Advertisement -