Ipsos’ latest Perils of Perception study highlights public misperceptions across 32 countries about the proportion of people who die from diseases, violence, transport injuries, and other causes.

These are the latest findings from Ipsos’ Perils of Perception survey. The survey was conducted in 32 countries and asked people what they think are the main causes of death in their country. 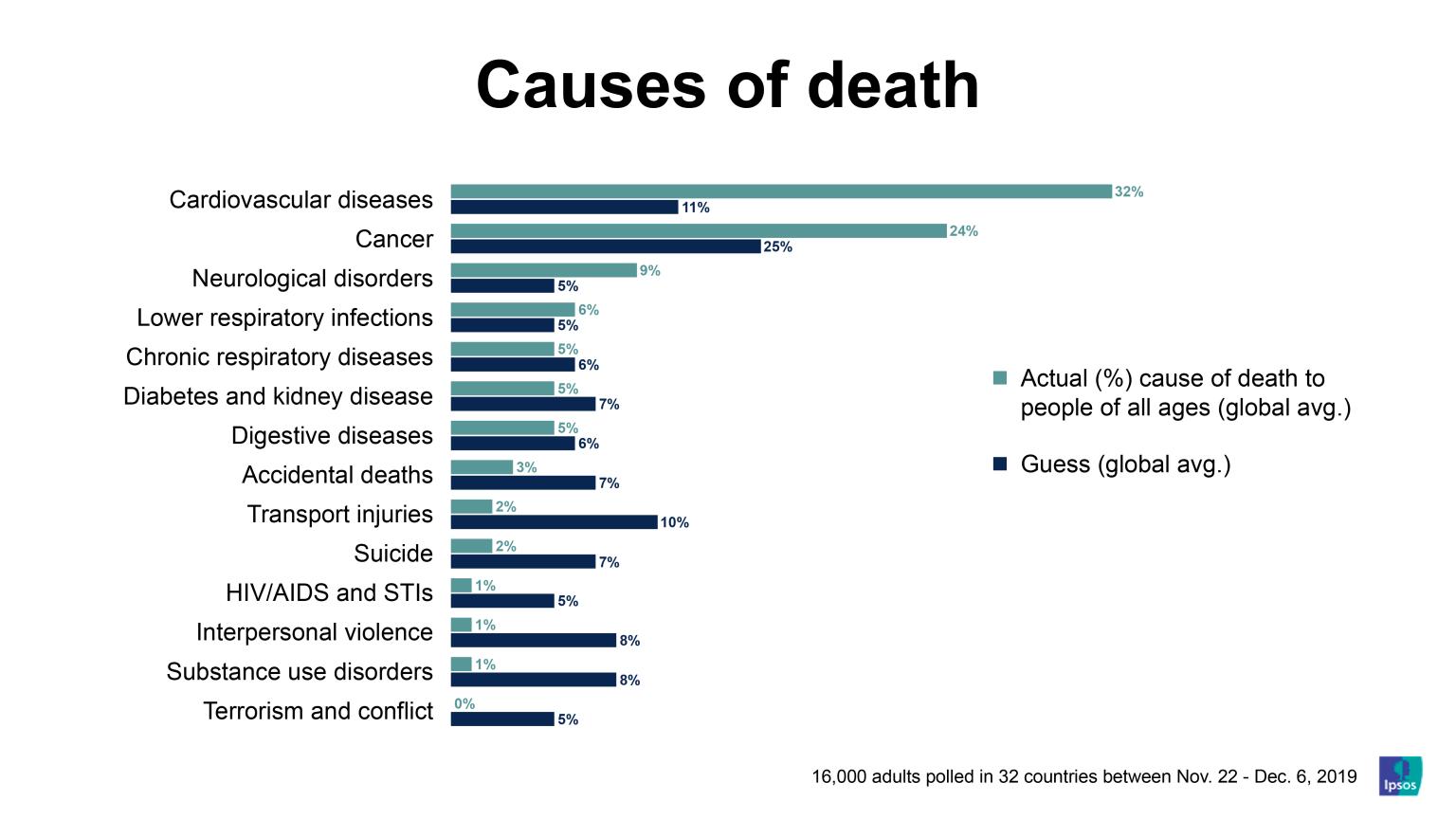 Causes of death around the world

Cardiovascular diseases are the leading cause of death globally according to the IHME Global Burden of Disease Study 2017 (IHME). The second biggest cause are cancers.

Nearly every country overestimates the proportion of deaths resulting from HIV/AIDS or sexually transmitted infections (STIs). The average guess is 5% when in reality the figure is 1%. In South Africa, HIV/AIDs and STIs cause 29% of deaths each year. But the average guess is 11%.

Nearly every country in the study overestimate the proportion of people who die from terrorism or conflict each year. The average across all countries is just 0.1% when the average guess is 5%. In Colombia and Turkey people are particularly likely to overestimate this with guesses of around 10% when the actual figures are all less than 1%.

The proportion of deaths resulting from drug or alcohol addiction is overestimated in all countries. On average people think this accounts for 8% of all deaths when in reality it is 0.7%. In Italy, the average guess is 10% when the actual percentage of deaths is 0.5%.

In every country, people overestimate the number of people who die by suicide. The average proportion of deaths by suicide for countries included in the study is 1.6% compared with an average guess of 7.3%. In Japan, the average guess is 10.9% when in reality the figure is 2.1%.

Looking across eleven questions where we get people to estimate factual realities, there are clear patterns in which countries have a more accurate view of their countries. To capture this, we’ve calculated the Ipsos “Misperceptions Index”, as shown in the table below.

For 2020, Turkey receive the unwelcome prize of ‘least accurate’ in their perceptions after coming 3rd in 2018. They are closely followed by Romania and Spain.

Brazilians are the most accurate, followed by South Korea and the Netherlands.

As part of the study, participants were also asked questions about things that could influence their guesses including what they saw most in the news, what they felt had the least control over and what they thought would be the most unpleasant way to die.

A spokesperson for Ipsos said:

“Our latest Ipsos Perils of Perception study highlights many countries are very wrong when estimating the main causes of death in their country.

Across all 32 countries in the study people underestimate how many people die each year from the biggest killers such as cancers and cardiovascular diseases. But the public in many countries also overestimates the scale of other causes of death such as those resulting from murder, transport injuries, suicide or substance abuse.

We know there are lots of factors that can influence perceptions so this year we also explored issues such as what people see most in the news, what they have been personally affected by and what they felt they had the least control over. In some cases, we can see these appearing to have an influence – for example, in some countries seeing more stories about them in the news does seem to be related to higher guesses around issues like transport injuries and interpersonal violence, even while people may have a better idea of what is actually likely to happen to them. The picture at an individual level is more complex and highlights how challenging it is to reduce to a single factor the influences on our perceptions of the world around us.

Death might not be a topic many of us want to talk about, but our misperceptions around it have clear public health and policy implications – and a more sophisticated understanding of these perceptions will enable a better conversation with the public about it.”

WHO reveals leading causes of death and disability worldwide: 2000-2019

Noncommunicable diseases now make up 7 of the world’s top 10 causes of death, according to WHO’s 2019 Global Health Estimates, published today. This...
Read more

Here are the top 10 causes of death – WHO