Recently, there were widespread reports that showed that the balance in Nigeria’s Excess Crude Account (ECA) had dropped from $325.0mn as at Nov-2019 to $71.8mn as of Feb-2020 (a whopping 77.9% decline within 3-months). However, The Nigerian government had since cleared the air that the c. $250.0mn difference was transferred from the ECA into the nation’s Sovereign Wealth Fund (SWF), as approved by the National Economic Council (NEC) on Nov 21, 2019. Herein, we piece the link between the ECA and SWF.

Notably, the ECA was established in 2004 with a primary objective of protecting Nigeria’s planned budget, against shortfalls caused by the volatility of crude oil prices. However, the establishment of the ECA experienced series of backlashes, especially regarding the constitutionality and legality of its existence. Thus, in a bid to resolve the legality issues around ECA, the NEC approved a plan to replace the ECA with a National SWF and on May 27, 2011, the President signed the Nigeria Sovereign Investment Authority (NSIA) bill into law. The NSIA Act, 2011 created the NSIA and authorized the establishment of the three ringfenced funds (Nigeria Infrastructure Fund, Future Generation Fund and Stabilization Fund) which are jointly owned by the three tiers of Government to prepare for the eventual depletion of Nigeria’s oil resources.

Read Also:  Foreign Portfolio Inflows in H2-2020: Will the market movers be back? 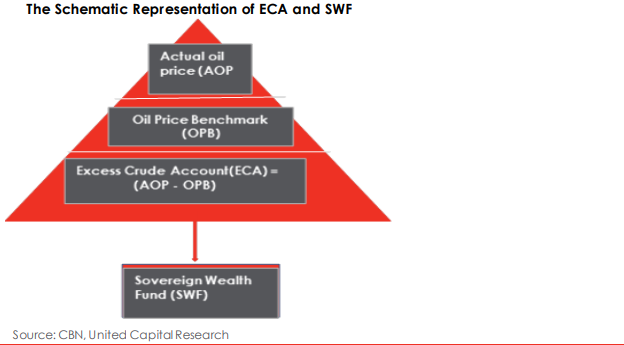 In all, while we note the legality of the transfer from ECA to the SWF, we believe that the current decline in global crude oil prices might pressure the ECA lower in 2020 – as initially feared across the board.

There is a common misconception that the most dangerous threats to encounter on modern users’ digital journeys are likely to appear during Internet surfing....
Read more

The National Economic Council (NEC) has inaugurated the sub-national ease of doing business report. The inauguration was performed at the virtual NEC presided over by...
Read more

The Energy sector experts from the government of Rwanda, the UN Economic Commission for Africa and the RES4Africa Foundation held a virtual meeting to...
Read more
- Advertisement -